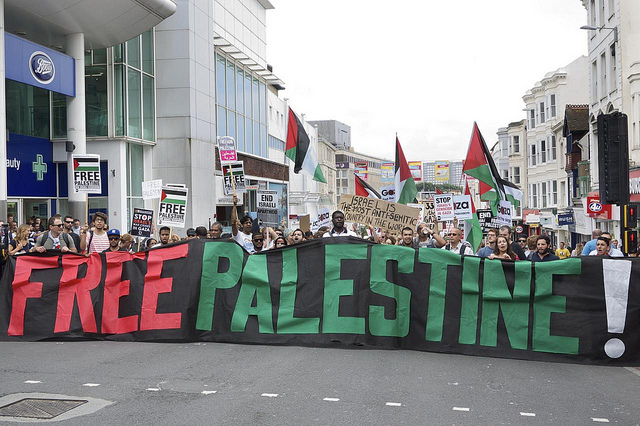 On December 4, United Auto Workers Local 2865, a union of 13,000 teaching assistants and student-workers at the University of California, became the first local of a major American union to pass a resolution by membership vote endorsing the global movement for Boycott, Divestment and Sanctions (BDS) against Israel. Voting results were released December 12 and mark an unprecedented moment for the BDS movement within the context of modern American labor activism.

A total of 2,168 votes were cast by union members, with 65 percent of them in favor of the measure directing the University of California and UAW International to divest their investment portfolios and pensions funds away from companies “complicit in severe and ongoing human rights violations as part of the Israeli oppression of the Palestinian people.” The primary targets of BDS campaigns are Hewlett Packard, Caterpillar, SodaStream, Elbit Systems, G4S, Mekorot, and Israeli banks. The advocates at UAW Local 2865 are demanding that, at a minimum, the university and union divest from these companies.

Local 2865’s ballot also included an optional box asking voters whether or not they would voluntarily pledge to boycott any scholarship sponsored by Israeli universities “complicit in the occupation of Palestine and the settler-colonial policies of the state of Israel.” Fifty-two percent of voters voted in favor. The ballot also called for an end for U.S. aid to Israel "until [Israel] complies with international law."

According to Local elected official Skylar Covich, a Political Science graduate student at UC-Santa Barbara who serves the campus recording secretary, union leadership passed a resolution in July endorsing BDS and calling for a membership vote on the matter after this summer’s bombardment of Gaza by Israel prompted members to attempt to heed the call of solidarity made by Palestinian trade unions who condemned the violence.

"Even though there certainly have been really horrible acts on both sides, there is something about the way the Israeli government has acted about this all that has been an injustice, especially since they are the far more powerful country," says Covich. "Since other people in the union were interested in this, I felt I needed to join [the local governing body] to make sure a message was sent about this," he adds.

The bombardment, which killed upwards of 2,000 Palestinian citizens in a 50-day campaign, along with continuing Israeli settlement encroachment into Palestinian territory, has brought Israel much criticism from human rights groups and foreign nations seeking peace in the region. Covich says that aside from a few abstentions, there was minimal resistance from union leaders when finalizing the election date.

Kumars Salehi, a German Studies graduate student at UC-Berkeley and a member of the BDS caucus within Local 2865, suggests that the resolution’s outcome was symbolic of the crucial link between BDS and American organized labor: “The overwhelming margin of victory shows that a consensus is emerging that BDS is a legitimate and justified strategy of international solidarity,” Salehi said in an email to In These Times. “Palestine is a social issue in the United States: Israel is now something you either boycott or you don't, and these results suggest for a new generation of workers and students the answer is increasingly to boycott.”

Although rank-and-file enthusiasm is strong according to the results, Local 2865 Executive Board member Katy Fox-Hodess, a sociology graduate student at UC-Berkeley, states that the UAW International has largely ignored its UC members’ desires to link their union to the BDS movement.

“The only comment they’ve made throughout this whole process was to reiterate a 2007 position that they and 44 labor leaders from around the country had signed on to,” says Fox-Hodess. Like Salehi, she hopes that the current generational shift will be favorable for BDS advocates. “[The statement was made] seven years ago and we hope that this vote taken by a local with large membership will lead to the International revisiting their earlier position.”

While Salehi’s home campus of Berkeley accounted for nearly one-third of votes cast, the resolution managed to pass with a majority at all UC campuses except for UC-Irvine and UC-Santa Barbara. The large support for BDS among UC teaching assistants parallels the success seen at the undergraduate level, with six out of nine student governments—UC Irvine, UC San Diego, UC Riverside, UC Santa Cruz, UC Berkeley, and UCLA—passing resolutions regarding divestment. The undergraduate legislative meetings devoted to these measures were notable for long hours and emotionally charged, packed rooms.

Despite the dual success for union and undergraduate advocates, the 26 Regents appointed by the state Governor to control the UC system have attempted to block BDS. In the past 15 months since Janet Napolitano became President of the University of California, she has not only criticized the academic boycott that 52 percent of Local 2865 members now belong to, but also reaffirmed a 2010 position on divestment stating that the University would only adopt it in the cases of genocidal foreign entities.

The lone seat on the Regents designated for students has also met controversy in recent years due in large part to divestment issues. UC Regent Richard Blum, husband of Sen. Dianne Feinstein, abstained from a vote to approve the 2013 appointment of Sadia Saifuddin, an undergraduate at UC-Berkeley, due to her political activity as an advocate for BDS during her term as a senator at Berkeley’s student government. Earlier this year, UCLA undergraduate Abraham (Avi) Oved was appointed amid protest stemming from a possible connection with pro-Israel donors.

Regardless of the recurring problem with the “undemocratic” UC Regents, Fox-Hodess told In These Times, “It’s going to take people from many different sectors within the university—other UC unions, the faculty and hopefully the broader public in California—to build on this momentum begun by undergraduate activists that we have continued with this union resolution.” Referencing the popular connection used by BDS activists, she adds, “Divestment from South Africa didn’t happen overnight, but was the result of years and years of groundwork by activists.”

Clarence Thomas, a member of ILWU Local 10, the same union that honored the “Block the Boat” picket lines at the Port of Oakland this past August, mentioned in an interview that while the union has not taken a formal stance on BDS, the institutional memory of BDS movement against apartheid in South Africa is very much a reason for expanded consciousness regarding Israel.

“Current members of Local 10 know past longshoremen have taken similar actions in the past. Many of them feel this is their chance to step up to the plate and be consistent with our history of honoring community picket lines, which we’ve done since the 1930s. They’re paying attention to things on social media and progressive press, and it has made people’s perspective change,” he says.

Thomas, speaking as a rank-and-file activist rather than on behalf of Local 10, says the movement for BDS against Israel will only grow stronger as it mirrors the anti-apartheid actions against South Africa in the 1980s. For the longtime rank-and-filer, ILWU Local 10’s “courageous” actions go hand-in-hand with the rest of the movement’s attempts to provoke large-scale economic shifts in Israeli investment.

“Anytime the working class can help out with rank-and-file grassroots victories it is really important and people have to pay attention to it,” Thomas says. Members should “think about the South African anti-apartheid struggle: we did it once, and we can do it again.”