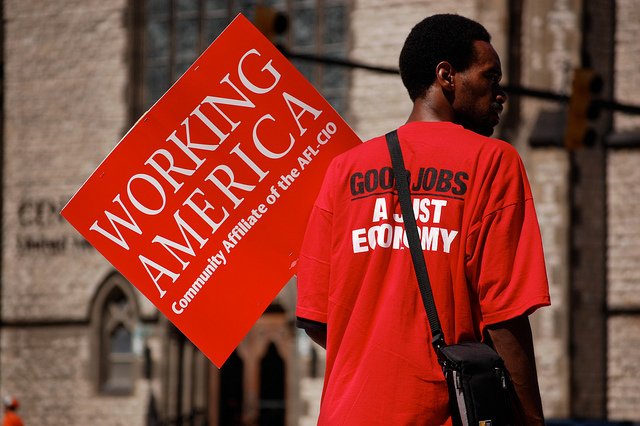 What, if anything, can save the labor movement from its steady decline as the organizational voice of American workers? The question, as Jake Blumgart notes, is not new, but it is increasingly urgent for the future of both work and politics in this country. Now the losses of union members in past decades have opened the floodgates to the current devastation for nearly all the much-heralded “middle class” and even worse fates for those less fortunate.

Last week a diverse group of talented organizers and astute observers of labor gathered in Washington, D.C., to offer their answers, at the invitation of the Albert Shanker Institute, the Sidney Hillman Foundation and the American Prospect. Not surprisingly, no one reported finding a silver bullet solution. But ongoing efforts to try out new organizational forms and strategies, as well as to re-invigorate the old, offer some hope.

The big question for everyone is how to increase the power that organized workers can muster to combat both increasingly hostile corporate and political opponents as well as corrosive trends in work and the economy—from globalization to the “fissured workplace,” where the ultimate managerial power escapes responsibility for what happens on the job.

An answer might be found, said David Rolf, a successful Service Employees (SEIU) organizer and founder of Workers Lab, a new venture to support innovative organizing, when we realize that “policy is merely frozen power, … and power only really comes from disruption,” which leads to “new seats being found at the table of power to bargain. … The question for the 21st century is: what is disruptive power?”

Across many political or strategic differences, many panelists seemed to agree that disruption and, therefore, power relied in large part on mobilizing as organizers many of the millions of already organized workers. Ultimately labor’s greatest resource, the talents of these members, are all too often untapped.

“Never give up on the rank-and-file workers having a space to fight for themselves,” AFL-CIO executive vice-president Tefere Gebre said. Union staff should not do things for them. Raise the minimum wage through a fight that mobilizes and educates workers and their allies, “not a backroom deal with legislators,” Gebre said, adding that “to build a movement, we’ve got to keep workers at the center of our thinking.”

Here are some of the more promising or provocative ideas presented at the conference: