Whether in Greece or the U.S., It’s Clear: Austerity Doesn’t Work 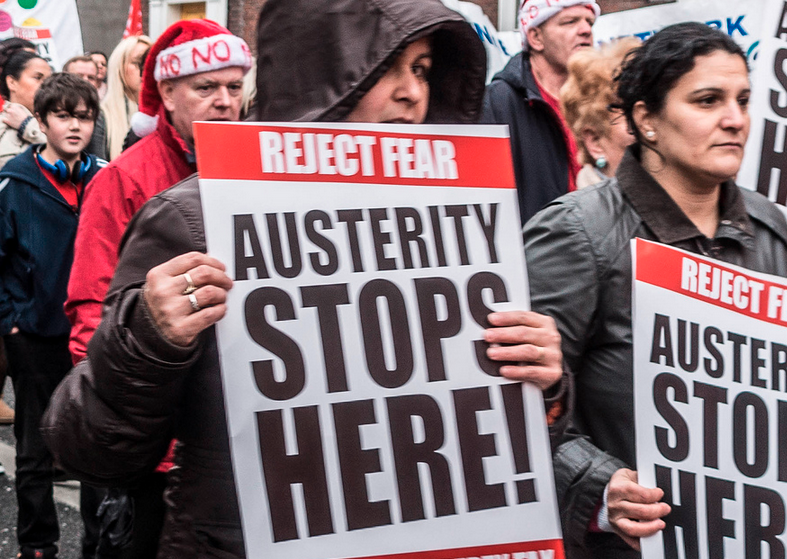 Throughout the Europe and the U.S., elites have called for austerity for thee, but not for me. But the example of Syriza is Greece is showing that democracy can help cure austerity. (infomatique / Flickr)

The people of Greece rebelled last week against the perverse notion that they should continue to endure biting austerity in a vain attempt to cure a condition that they are not solely responsible for creating.

When bets by big banks worldwide failed spectacularly in 2008, markets imploded and economies collapsed. Bailed-out banks, the wealthiest 1 percent and export-based economies like China and Germany quickly recovered. But workers struggled long-term. Austerity imposed on them was a big part of the reason. Workers were the victims of austerity’s slashed public services, wages and jobs. Those demanding austerity—the 1 percent—and those imposing it—conservative politicians—escaped its bitter effects with shields of cash. Austerity was not for them. It was for those without big bankrolls. That would be bad enough if austerity worked. But, as Greece illustrates horribly, it does not.

Greece was no shining economic model before the worldwide recession hit. Its wealthiest citizens and business oligarchs shirked their duty to pay taxes, contributing to a large national debt. But Greece wasn’t in crisis until the banks busted every country’s economy.

After the crash, the troika of the International Monetary Fund, the European Central Bank and the European Commission gave Greece loans to pay its creditors and prevent a Eurozone country from going bankrupt. The loans came with austerity as a condition.

Greeks pointed to Chancellor Angela Merkel of Germany as their tormentor. She is the austerity maven,demanding cruel cuts in Greece, Ireland, Spain, Portugal, and every country that experienced severe economic crisis after the banks wrecked the world economy. She insisted on the suffering elsewhere as Germany, the beneficiary of grants, loans and loan forgiveness after World War II, chugged along on waves of exports.

That is austerity for the other guy.

Its echoes can be heard in the harangues of American Republicans. They threw a hissy fit when in the first year of the Obama Presidency, he persuaded a Democratic-majority Congress to approve stimulus spending.

Stimulus is the opposite of austerity. It injects money into the economy, often through the job-creating construction of public facilities such as roads, bridges and sewers. And it works. Many economists believePresident Obama’s stimulus spared Americans from the longer, deeper recession that shattered lives in Merkel’s austerity-riddled Europe.

Once Republicans took control of the U.S. House of Representatives, and doubly so now that they’ve got the Senate as well, they set about condemning Americans to the austerity that failed in Europe. They cut funds for public services and food stamps. They refused to extend unemployment insurance. They tried repeatedly to rescind the health insurance that 10 million Americans received through the Affordable Care Act. They voted to cut Social Security for the disabled by 20 percent.

They’re intent on making middle class and working poor Americans suffer. Republican politicians won’t feel the pain. They’ve got their political jobs and their government-paid health insurance and pensions. Their campaign benefactors, the wealthy 1 percent, insulate themselves with millions stashed in tax-evading offshore bank accounts and with other assets. For example, a former hedge fund director told congregants at the World Economic Forum’s Davos meeting earlier this month that his billionaire crony private jet owners are buying security for themselves with airstrips and farms in secluded places like New Zealand.

It’s austerity for the other guy.

The thing is, though, austerity doesn’t work. It damages economies. It doesn’t fix them like stimulus does. Austerity shrank the Greek economy by 25 percent. So even though the government cut spending and raised taxes, it received less revenue from the higher levies in its shriveled economy, making the loan payments more difficult.

The vast majority of the money Greece borrowed through the troika repaid international creditors and bailed out Greek banks. Although the international lending institutions probably made bad bets when they lent money to Greece in the first place, taxpayers—in this case Greek taxpayers—were forced to ensure the banks didn’t experience the losses that should occur naturally as a result of risky business decisions.

After six years of austerity and deep recession, the people of Greece balked. Last week, they elected as their Prime Minister Alexis Tsipras, a leader of the Syriza party, who promised to abandon austerity, which he calls "fiscal waterboarding."

He promised to demand the creditors write down the loans by half and to use the savings to increase government spending, which will stimulate the Greek economy and employment. That would raise revenues from taxes, thus easing loan repayment and providing funds for additional stimulus.

Tsipras has support from political upstarts in other austerity-shattered countries. At one of his last campaign rallies, he was joined by Pablo Iglesias, whose far-left political movement in Spain called the Podemos party also rejects austerity. Podemos victories last year denied traditional Spanish parties majority votes in May’s European parliamentary elections for the first time in 40 years. And polls show the one-year-old party already has 20 percent support and is gaining.

Similarly, the left-wing leaders in Italy and France have demanded easing of austerity.

Beyond being a failed policy, austerity doesn’t sell well. The majority, which suffers from it, doesn’t want it. They’re unwilling to lose their jobs, their health insurance, their homes, their pensions, their savings, their children’s futures—their  everything—to bail out banks, Wall Street, the rich, all those who never feel a pinch—or even a twinge of sympathy. Let alone guilt.

When the majority gets an actual chance to vote on austerity, it goes down. As it did in Greece. Democracy cures austerity.