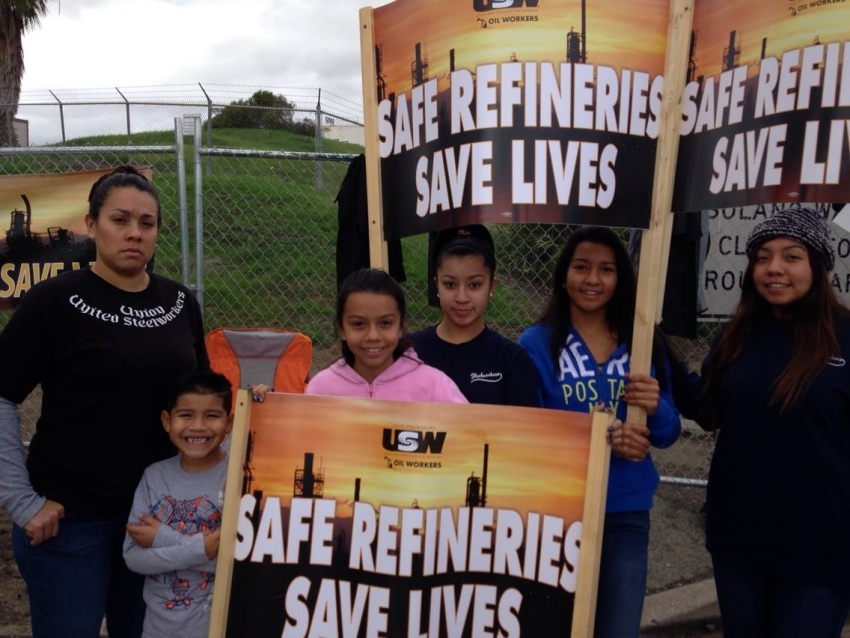 A worker at the Richmond, California, Chevron refinery and her family on the picket line. The strike—the first in a generation—has now entered its second week.   (Rebecca Burns)

MARTINEZ, CALIFORNIA—During the nearly four decades he’s worked at the Golden Eagle refinery here, Howard Jones has seen four changes in the facility’s ownership and three major workplace accidents. What Jones, a mechanical designer in the plant’s engineering department, wasn’t expecting to see was another day when workers at the plant would walk off the job en masse.

“I was hoping I’d be retired before we had to do that again,” says Jones, who took part in the 1980 strike that shut down oil refineries across the country. Last week, Jones and nearly 3,800 members of the United Steelworkers (USW) once again walked off the job in the first nationwide strike at refineries in more than 30 years.

The union says that its members are engaged in an unfair labor practices (ULP) work stoppage as a result of oil companies’ bad-faith bargaining, refusal to discuss safety improvements, and other non-wage issues. that it is seeking in national contract negotiations (though a USW spokesperson says that no ULPs have yet been filed). The Steelworkers’ current contract expired on February 1.

On Saturday, USW members staged rallies at more than 60 refineries across the country as part of a national day of action meant to spur oil companies to settle an agreement with U.S refinery owners, led by Royal Dutch Shell. The union rejected a new contract offer made on Thursday, saying it made “minimal movement” on key concerns.

USW and Shell resumed meeting on Tuesday, but an update sent to union members reported that "little progress" had been made in negotiations.

Among the changes the union is seeking are lower out-of-pocket healthcare costs, a reduction in the use of non-union contractors and adequate staffing and protections to address what workers call a “fatigue policy”: contiguous 12-hour shifts for up to two weeks at a time. Gas and oil workers are more than six times more likely to die on the job than the average American, and the union asserts that forced overtime and industry corner-cutting drive up fatalities.

At a rally Saturday at the Golden Eagle refinery, now owned by Tesoro, striking workers were joined by their counterparts from nearby Chevron and Shell plants, as well as members from several local unions and community groups. Workers at other Bay Area-refineries are still on the job, but could join the stoppage if no resolution is reached. Yesterday, the strike widened to include two BP refineries in Indiana and Ohio, bringing the total number of workers involved to nearly 5,000 at 11 refineries and chemical plants nationwide.

BP said in a statement that it was “disappointed” that the union is launching a strike at the two refineries.

Oil companies have kept most of these refineries operating in spite of the work stoppage. As reported by Reuters, refinery owners are expected to reprise some of the same measures used during the 1980 strike, such as sending managers to fill union positions.

That strike lasted more than three months, and Jones remembers the hardship that this caused among his fellow employees. The stress of the long campaign led to more than one divorce, and one union member committed suicide, he says. But ultimately, the strike led to important gains in workers’ wages and benefits, Jones says, as well as a stronger hand in designing workplace safety measures.

Today, Tesoro workers say that they are excluded from decisions that impact their health and safety. The Tesoro plant has gained a reputation as one of the most dangerous workplaces in the industry since four workers died in a 1999 explosion, and Jones fears that safety could deteriorate further in the wake of the company's 2012 decision to cancel an accident prevention and investigation program administered by the union and to back out of another safety program run by the California Occupational Safety and Health Administrations.

"Those programs did a lot of good," he says, "But I don't think management liked union people drilling down into their policies."

As a member of the local bargaining committee, Jones hopes that the first oil strike in a generation can once again improve conditions at the facility.“It’s about showing the company that we’re willing to fight,” he says.

Unions representing oil companies use a process known as “pattern bargaining,” under which negotiations proceed at two levels. “National Oil Bargaining” talks take place between Shell and the USW and focus on establishing a pattern of wages, benefits and working conditions. Bargaining by union locals proceeds simultaneously, but excludes issues being discussed at the national table. Bay Area refineries, represented by the USW Local 5, are contending with a host of safety issues specific to each plant, as well the establishment of a civil and human rights committee to concentrate on increasing the number of women and people of color hired at the plant.

Angelina Salinas, who works at the Chevron refinery in Richmond, California, rallied Saturday with a sign reading, “Women and Minorities Matter.” She emphasized that all union members at her plant share a common set of issues, but that women in particular “have to fight for fair treatment.” At the Shell plant in Martinez, the union says that management has not released figures on how many women and minorities are employed at the plant.

In August 2012, Richmond was the site of a devastating refinery fire that landed more than 15,000 area residents in the hospital with injuries like smoke inhalation. There were no fatalities, but the blaze was a near-miss for 19 workers enveloped in a vapor cloud that was released when a corroded pipe ruptured. An investigation by the U.S. Chemical Safety Board (CSB) concluded that Chevron had known about the corrosion for 10 years but had ignored a series of dire reports from its own technical personnel.

In January, the CSB released a final report, outlining a “flawed safety culture” that exerted pressure on employees to maintain operations even in the face of leaks and other serious hazards. Though Chevron maintains that employees already have a “stop work authority” to shut down operations in case of problems, the union says that managers often second-guess or punish workers who use it, and is seeking a stronger codification of stop work authority in local bargaining.

As In These Times has reported previously, the Chevron refinery fire touched off unprecedented levels of collaboration between labor and environmental justice groups in Richmond, bridging a gulf between two groups that are often portrayed as fundamentally at odds with each other. But USW Local 5 and local environmental organizations have repeatedly made the case that worker safety and community safety are intertwined—an argument that, as labor writer Steve Early noted last week, recalls the strong blue-green alliances built under the leadership of the Oil, Chemical and Atomic Workers (OCAW) union (which merged with the USW in 1999) during a series of nationwide oil strikes in the 1970s.

As the strike rolls into its second week, some green groups may join workers on the picket line. “The oil companies are creating conditions that make it impossible for refinery workers to protect us,” said Joe Uehlein, executive eirector of the Labor Network for Sustainability, in a statement addressed to environmental activists. “Their strike is about making conditions that are safe and healthy for workers and communities.”