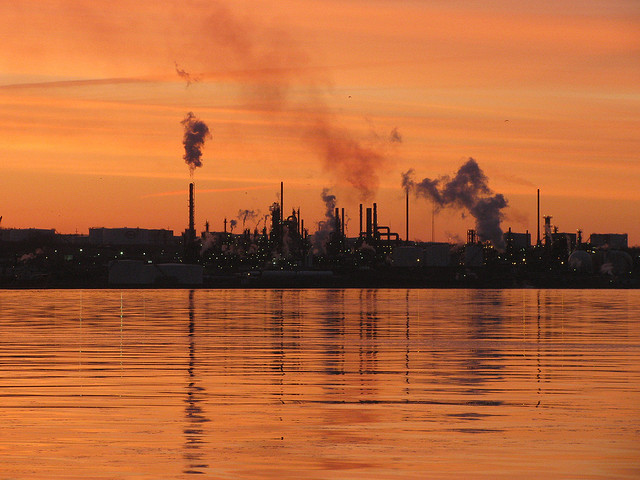 In the U.S., where the influence of organized labor has long been contracting, the death of a former trade union official is often little noted. Yet Tony Mazzocchi was no ordinary labor leader. His passing from the scene, at age 76, was widely recognized and correctly mourned as a great loss for the entire union movement.

As a top strategist for the Oil, Chemical and Atomic Workers (OCAW), Mazzocchi pioneered alliances between workers concerned about job safety and health hazards and communities exposed to industrial pollution generated by companies like Shell, Chevron, and Mobil.

In 1973, members of the OCAW (who are now part of the United Steel Workers) conducted a national contract campaign and four-month strike at Shell Oil over workplace safety rights and protections. As Mazzocchi’s biographer, Les Leopold notes, “the strike helped build a stronger anti-corporate movement” because OCAW members learned “that you can’t win these fights alone.” To win—or even just battle Big Oil to a draw—workers had to join forces with the very same environmental organizations long demonized by the industry as the enemy of labor and management alike.

Four decades later, echoes of that struggle could be heard on the refinery town picket-lines that went up in northern California, Texas, Kentucky, and Washington state this week. Thousands of oil workers walked out, for the first time in 35 years, over issues and demands that Tony Mazzocchi helped publicize and build coalitions around for much of his career.

About 30,000 refinery employees are still covered by the USW agreement that expired last weekend. Nearly 4,000 of them are on strike at nine plants already, including Tesoro refineries in Martinez and Carson, CA. Other USW members, including those employed at Chevron in Richmond, may join the walkout if industry negotiators fail to address non-wage issues summarized by USWA vice-president Gary Beevers as follows:

“Onerous overtime, unsafe staffing levels, dangerous conditions the industry continues to ignore; the daily occurrences of fires, emissions, leaks and explosions that threaten local communities without the industry doing much about it and the flagrant contracting out that impacts health and safety on the job.”

In the best Mazzocchi tradition, that list of union concerns will certainly resonate among my Richmond neighbors, who saw Chevron’s huge refinery here erupt in a major explosion and fire several years ago and often complain about the bad air quality resulting from its emissions.

Unfortunately, too many people in this community equate Chevron’s unionized workforce with the AFL-CIO building trades organizations that regularly mobilize their members to support the company’s own questionable environmental agenda. Just last fall, those unions, which represent workers employed by Chevron contractors, joined Chevron in a  $3.1 million campaign to defeat progressive candidates for Richmond city council and mayor. All of these outspoken critics of the company’s workplace safety and environmental record were elected or re-elected anyway, after a strong grassroots campaign by the Richmond Progressive Alliance (RPA).

As recently as January 28, the U.S. Chemical Safety Board was back in our city hall chambers releasing its final findings and recommendations on Chevron’s 2012 refinery accident.  The CSB again faulted lax maintenance practices for “ the catastrophic pipe rupture,” hydrocarbon release, and resulting vapor cloud that engulfed nineteen employees, nearly killing them.  Fall-out from the accompanying forced 15,000 residents of Richmond and neighboring communities to seek medical attention; the city is now suing Chevron for millions of dollars in compensation for other losses, including damage to local property values.

In its final report, the CSB criticized a Chevron “safety culture” that “encouraged continued operation of a unit despite hazardous leaks” and discouraged its unionized employees from asserting their contract safety rights. The CSB’s lead investigator, Don Holmstrom, cited evidence of “increased reluctance” among Chevron refinery operators “to use their ‘stop work’ authority despite being concerned about the results of maintenance deficiencies.”

On January 28, the company’s usual building trades cheering squad was conspicuously absent. Instead, members of USWA Local 5 turned out in force, wearing union jackets and holding signs publicizing their key bargaining demands, which overlap with the CSB’s own recommendations and proposals (none of which are binding on Chevron).

Local 5 member Jim Payne applauded the CSB and welcomed its backing for stronger “stop work” authority in situations of imminent danger.  Former Richmond mayor and now city council member Gayle McLaughlin backed Local 5 all the way. “I support the calls for workers’ right to shut down operations when they feel it’s unsafe,” she told the CSB on Jan. 28–just three months after Chevron and its building trades allies failed, once again, to drive her from office.

Divide and Conquer No More?

In a message to USW members and community supporters this week, Local 5 president BK White sounded like an RPA member himself. “Chevron for years has attempted to rule the Richmond refinery through fear mongering,” he asserted. The city’s “progressive element…has been painted in a bad light for their work of attempting to fight for local residents.”

“The company has attempted to quell the voices of workers with the fear of the refinery’s closing, whether it is from regulatory agencies or community activists, “White said. “This is a failed attempt to weaken the union and intimidate our rank-and-file from rocking the boat or fighting for their rights…To underestimate our resolve, would be a grave miscalculation.”

Union-oriented environmental activists, locally and nationally, are responding in kind. The Labor Network for Sustainability is calling for USWA picket line support and other forms of solidarity.

Like Tony Mazzocchi long ago, its national coordinator, Joe Uehlein stresses the importance of linking up with refinery workers because they “are on the frontlines of protecting our communities against the environmental hazards of the oil industry.” According to Uehlein, management is “creating conditions that make it impossible for refinery workers to protect us,” even though their shop-floor “skill and experience is critical for preventing devastating explosions, spills, and releases.”

As part of its own outreach to community allies, the USW is making the case for oil industry safety reform in a compelling video entitled Still Out of Control. The problems of understaffing, mandatory overtime, worker fatigue, lack of refinery maintenance, and too much contracting out are all well-documented in this short film, a sequel to one made by the OCAW years ago.

There are many other industries in America that put production and profits before safety but few with deeper pockets or greater environmental impact than Big Oil. So what better place to make blue-green alliance building more real than rhetorical, among labor and community partners long pitted against each other by companies like Chevron and Shell?