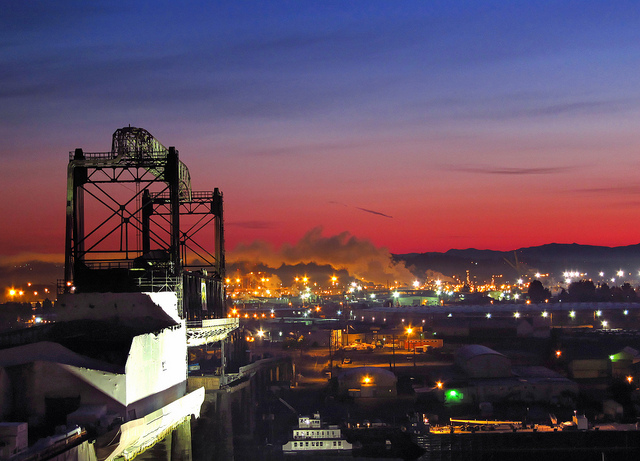 President Obama has sent the Secretary of Labor to mediate the dispute between the Pacific Maritime Association and the International Longshore and Warehouse Union. (Scott Hingst / Flickr)

Update: ILWU and PMA agreed to a tentative contract brokered by Labor Secretary Tom Perez on Friday afternoon. Secretary Perez had threatened to move negotiations to the White House if an agreement wasn’t made by the end of last week. The head of the Department of Labor brokered a breakthrough between the two sides on the pivotal issue of the arbitration process, as described by In These Times last Thursday, thus resulting in a reported new system for selecting arbitrators who are tasked with resolving worksite disputes.

This marks a major concession to ILWU, where union leaders had criticized the arbitration model for its life-term arbitrators appointments.

Secretary Perez tweeted Friday night: "If it weren’t the last issue, it would have been solved earlier. But both sides in ports dispute committed to solving problem and did it."

Details to this solution have been sparse as both ILWU and PMA have declined to release further information on the contents of the deal. During a press call that same night, Perez was quoted by Politico as saying, “I don’t think anyone knows who the next arbitrator will be.” He went on to say, “What I do know, and have great confidence in, is the new arbitration system is going to ensure that everybody gets a fair shake.”

The new contract will be tentative until the ILWU rank and file votes and officially approves of it. Craig Merrilees, communications director at ILWU, declined to give a date on a union contract vote but tells In These Times, "The ILWU’s ratification process is careful and democratic, allowing rank-and-file workers a thorough and final say in the contract process."

By the end of President’s Day 2015, thousands of containers idled on ships that were left anchored and unworked at the 29 American ports on the West Coast for six of the previous 10 days. The operational suspension was imposed by the Pacific Maritime Association (PMA), an employer association predominantly consisting of multinational shipping corporations, after concluding they were not willing to pay weekend and holiday wages for what they deem to be “diminished” productivity by union dockworkers.

The shutdown, affecting terminals that handle 40% of international trade cargo, has cost exporters deeply while also earning criticism from legislators. This latest move by port operators comes nine months into new contract negotiations between PMA and the 20,000 dockworkers represented by the International Longshore and Warehouse Union (ILWU). President Obama has now sent Secretary of Labor Thomas Perez to mediate for PMA and ILWU in hopes of spurring discussions between the two sides. Failure for Perez means potential executive action from President Obama to prevent further work shutdowns at these major American ports.

Craig Merrilees, ILWU’s communications officer, says, “Employers are pointing the finger at workers, but the biggest drops in productivity have been caused by longstanding congestion problems that were triggered by industry decisions.”

Congestion issues, according to analysts, began with use of “mega ships,” new models of container-carrying vessels that have caused severe bottlenecks in the shipping line due to increased capacity. This increase in capacity, says Dean McGrath, President of ILWU Local 23 at the major U.S port of Tacoma, Washington, is motivated by “short-sighted” corner cutting.

“They have made decisions to save a nickel, and it's ended up costing them a dollar,” he says.

According to McGrath, larger ships have to be serviced at major ports, such as the ones at Los Angeles, Long Beach, Oakland, Seattle and Tacoma, because smaller ports “aren’t ready to have mass input of cargo at one sitting.” He cites the need for mass infrastructure improvement throughout West Coast ports in order to facilitate the now-common usage of ships reported to be 40% larger than previous standards.

The challenge of increased capacity extends to port truck drivers, who now face a near doubling in wait time between trips to and from ports in addition to what they say are poor wages.

“Their decisionmaking process is getting made farther and farther away from the docks, by people sitting in board rooms,” says McGrath. “It’s a race to the bottom and sometimes it doesn’t even make financial sense for them.”

Another industry decision leading to backlog is the outsourcing of vital “chassis” at ports. Chassis are the trailers used to move containers between the terminal and the trucks. According to Forbes, “the number of chassis required for a ship is between 2,000 and 5,000.” In the past two years, operation and maintenance of the chassis has been increasingly moved from the shipping line operators and towards third parties via outsourcing—eliminating former ILWU jobs. While ILWU has made jurisdiction over chassis inspections a focal point of contract negotiations, PMA claims they have no authority over third parties who now own the chassis machines.

Regardless of ILWU jurisdiction, Dr. Noel Hacegaba, Chief Commercial Officer for the Port of Long Beach, told Long Beach Post, "We don't have enough chassis to go around, and on top of that the ones that are available are not where they're supposed to be. ... A big ship comes to Terminal A, for example, but Terminal B has all the chassis.” This recent lack of chassis compounds congestion at west coast ports.

PMA has reportedly admitted to ILWU at the negotiating table that it does not blame workers for congestion, but its press releases have indicated the opposite. Since early December, PMA has eliminated night and evening shifts at many major ports in response to supposed worker “slowdowns.”

“PMA is closing the ports in an effort to gain leverage in negotiations, while blaming workers for their actions,” Merrilees says.

When shipping lanes reopened on Monday after last weekend’s two-day shutdown by PMA, the association of employers issued another press release accusing workers of orchestrating a slowdown. This time, PMA “[revealed] the ILWU’s demand to be able to fire any arbitrator who rules against the Union.” The arbitrators are meant to be balanced judges that deal with labor disputes. Currently, arbitrators serve life terms, an issue for ILWU due to the lack of accountability with potential conflict of interest.

“Employers are deliberately distorting a perfectly reasonable proposal to end life terms for area arbitrators, and have them serve instead as long as the contract. When the contract expires, both parties could agree to reappoint and choose to agree on someone else,” Merrilees tells In These Times. “Perfectly reasonable,” he says, “but apparently the companies opposed it so strongly that they decided to close the ports … and restrict operations by 2/3—eliminating night and evening shifts—on days that the ports remain open.”

While PMA has touted wage increases for full-time dockworkers, ILWU’s employers allege that this is already atop an average full-time salary of $147,000. McGrath remarks that PMA’s press releases have been effective in spurring public outrage to the point of even getting some hate mail.

“The whole thing about the pay is just a propaganda tool to turn the public against us,” he says. “It isn’t even about money—we’re fighting our jobs and our livelihood. The workers know you can’t make $147,000. In order to make $147,000, you’d have to work at one of the highest skilled pay grade for 3,300 hours.”

The alleged discrepancies between PMA’s words and actions at this point, according to union officials, is part of a failed public relations campaign being conducted by what McGrath calls “one of the most despicable companies in the world,” Burson-Marsteller.

The global PR giant is currently employed by PMA and is the same company that led public relations for Union Carbide India Limited after the Bhopal disaster that killed 3,787 and left over half a million Indians injured, as well campaigns for the military junta of Argentina between the late 70s to mid 80s. More recently, it helped Philip Morris beat back anti-smoking legislators, and serviced the private security company formerly known as Blackwater after its scandal-plagued years in Iraq.

As contract negotiations continue and their employer continuing to shut the port down, ILWU faces steep challenges. But McGrath sees an upside.

“They have been testing our resolve, trying different strategies, thinking that we were going to cave and they grossly misjudged the unity of the membership,” he says. “In one way, I hate to see this happening, but on the other, it’s a fact that it has given [members] more education than I can do in a million programs.”