‘Uber is a rip-off for its drivers and the public’: Cab Drivers Protest Rideshares in Chicago 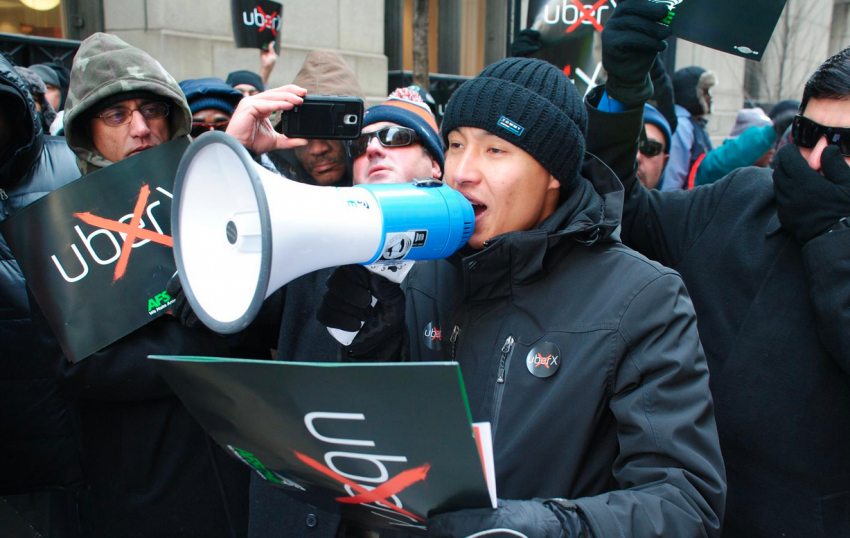 If you’ve taken an Uber recently, you probably forked over an extra dollar for a “Safe Ride Fee,” a recently-added cost that the tech giant says will help ensure that drivers and their vehicles are fit for the road. Soon, you will also be able to share details of your location and ETA with people waiting at the other end of your Uber ride, just in case your driver decides to drive you to a secluded location, sexually assault you, and/or hit you over the head with a hammer—all offenses that Uber drivers have allegedly committed against riders during the past year.

Uber denied liability in these incidents, as well as in the death of a 6-year-old girl struck by one of its drivers in San Francisco last year. But in December Uber hired a “head of global safety” and pledged to ramp up precautions. Riders may or may not be comforted by the results so far: Among them, an assurance that they will now be able to press an app-based “panic button” if things in the passenger seat start to go awry. But they’re consistent with Uber’s approach of letting the free market to take the wheel—while continuing to collect commissions of up to 25 percent. Uber is currently valued at $40 billion.

The company has faced a slew of bad headlines in Chicago as of late, including two alleged sexual assaults by its drivers over a three-week period in January. Nevertheless, the city announced this week that it would license Uber to operate as a “transportation network provider” (TNP), a new category of commercial vehicle transportation created last year.

On Wednesday, more than 100 Chicago cab drivers rallied at City Hall to protest the decision, which they say harms their livelihoods as well as public safety. Chicago cab drivers must pass background checks and drug and physical exams each year as a condition of license renewal, leading cabbies to complain that they’re victims of a “two-tier” system that subjects them to onerous regulation while giving a free pass to Uber, Lyft and other app-based ride services.

“The issues are piling up and the city is not solving them,” said Ismail Onay, who has been a licensed taxi driver in Chicago for 14 years. “Driving a cab used to be a pathway to the middle class, but Uber is disrupting and killing our industry.”

While Chicago caps the number of cabs that can operate at any given time to about 6,500, there are as many as 13,000 Uber drivers in the city according to Cab Drivers United, a labor group affiliated with AFSCME Council 31 that staged Wednesday’s protest. The United Taxidrivers Community Council, another labor group, staged a separate protest against Uber on Tuesday.

App-based “sharing economy” companies have long enjoyed a regulatory Wild West, but Chicago, Boston and several other cities have moved recently to impose new rules on ridesharing. After passing an ordinance last spring that established a licensing process and protections against price surging, Chicago issued the first TNP licenses to Lyft and Sidecar in November.

According to the ridesharing ordinance, companies whose drivers log an average of more than 20 hours per week must obtain a “Class B” license, which requires drivers on the platform to obtain a public chauffeur’s license and submit to background checks and annual vehicle inspections conducted by the city. But both Lyft and Sidecar were granted the less restrictive and expensive “Class A” license created by the ordinance, under which the companies must pay $10,000 for the licenses but can continue to conduct their own background and vehicle inspections.

The city allows companies to choose which license they apply for, and then allows them to self-report their own data on driver hours to prove that they are complying with its regulations. As a result, say cab companies and other critics of the ordinance, few companies are likely to opt for the more expensive and onerous license—effectively continuing the unregulated status quo for ridesharing.

Uber also applied for a TNP license, but the city had delayed its approval in the wake of the alleged sexual assaults by its drivers. According to the Chicago Sun-Times, the city’s decision this week to license Uber is contingent on a “promise” from the company to implement a list of additional safety measures in Chicago, including cooperating with police in investigations of its drivers, employing off-duty police officers to conduct monthly safety audits and checking the city’s list of suspended, denied and revoked chauffeur’s licenses and deactivating any drivers who appear on this list. (Neither the City of Chicago nor Uber responded to requests for comment on this decision).

“After two years of operating illegally in Chicago, the city’s response to allow Uber, a politically connected, billion-dollar corporation to operate based on a ‘promise’ is unlike anything I’ve ever seen,” said Cheryl Miller, a member of CDU.

They’re not the only ones crying foul. Alderman Bob Fioretti, who is running for mayor in Chicago’s elections this month, has accused current Mayor Rahm Emanuel of political favoritism towards Uber. The mayor’s brother, Hollywood agent Ari Emanuel, is a major investor in Uber, though his William Morris Endeavor agency has declined to state exactly how large its ownership interest is.

The mayor has said that his advocacy of ridesharing regulations are “just the opposite” of favoritism. “Let me say this about Ari. He doesn’t need his older brother to get rich. Think of it as me getting back at him,” Emanuel told the Chicago Sun-Times last year.

Uber passengers, of course, aren’t the only ones being taken for a ride by Silicon Valley. As In These Times has reported previously, drivers on the Uber platform have been staging protests of their own in opposition to what they say are erratic fare cuts and a dwindling share of the company’s profits.

Cab Drivers United (CDU), which began organizing Chicago taxi drivers last year, says that it currently has 4,000 members, none of them UberX drivers. But a spokesperson says that the group would welcome drivers who work on app-based platforms, given the exploitative nature of the industry.

Following efforts by AFSCME to organize cab drivers in New Orleans, CDU has been working to reduce the rates drivers pay to lease their vehicles; improve the process for adjudicating complaints and citations, for which drivers can lose their licenses; and decrease the maximum fines drivers can receive for violations like rider complaints or traffic violations. The group is not officially a union, and AFSCME says it has no plans at present to file for an election, but CDU was successful in passing a “taxi driver fairness” ordinance through the city council that will take effect this month.

Still, taxi drivers say that Uber is cutting into their fares and that the city needs to create a level playing field.

“Uber is a rip-off for its drivers and a rip-off for the public,” said cab driver and CDU member David Boakye. “This is our first big protest against Uber in Chicago, but if we need to we will escalate.”