SEIU Local 73 Staffer On Mayoral Neutrality: We Have a “Good Working Relationship” with Rahm Emanuel 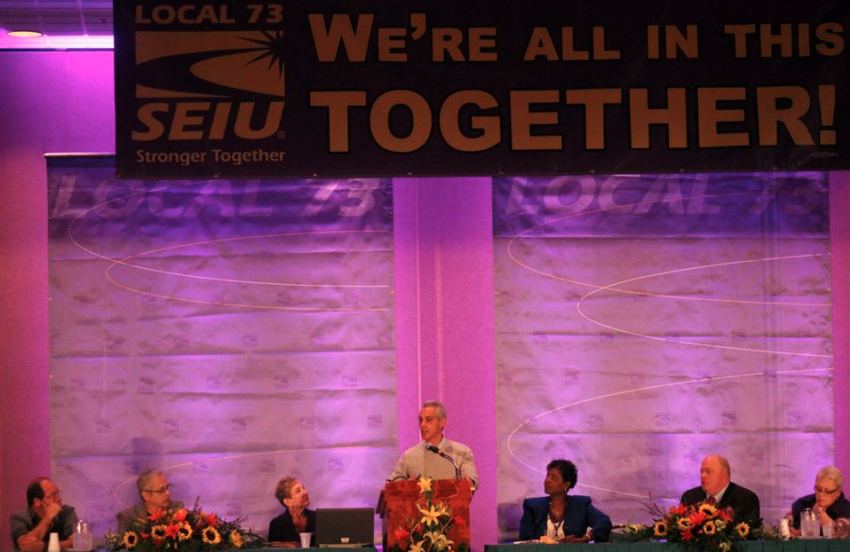 Much of Chicago was surprised to see Mayor Rahm Emanuel forced into a runoff election with Jesús "Chuy" García last week, and the city's labor movement was no exception.

The vast majority of Chicago labor—including parts of the movement's progressive wing like UNITE HERE Local 1—decided to continue backing the mayor, despite what many critics consider to be a strong anti-union and pro-corporate governing record. Of the city's major unions, only the Chicago Teachers Union and SEIU Health Care Illinois & Indiana (HCII) took a strong line against Emanuel, committing significant financial resources and members to García's campaign.

HCII's support came despite a vote in December 2014 by the SEIU Illinois State Council, the political arm of Chicago's three SEIU locals (Local 1, Local 73 and HCII), to remain neutral in the race, leading Local 1 president Tom Balanoff to state at the time that the "contribution to a mayoral candidate by SEIU Health Care Illinois Indiana is in direct violation of that vote and the constitution and bylaws of the Illinois State Council. The violation will be addressed through SEIU’s official internal processes."

But as the Chicago Sun-Times has reported in recent days, García's unexpected victory appears to have the three locals considering different paths. Local 73 remains committed to neutrality while HCII remains committed to supporting García. But Local 1 has publicly stated that it is reconsidering its decision over whether to remain neutral.

“The neutrality vote we took was a vote in the first round," Local 1 political operative Jerry Morrison told the Sun-Times last week. "This is now a different election."

But Local 73 disagrees. On Monday, it was their turn to voice their dissatisfaction with HCII's decision to make a mayoral endorsement.

“I think what SEIU has to do is decide whether they’re going to stand by the principles of unionism that they purport to support or whether they’re going to allow renegade locals to take matters into their own hands," Local 73 Secretary-Treasurer Matt Brandon told the Sun-Times on Monday. Brandon said he filed charges against SEIU Health Care in January with the international group.

One could find this stance confusing because as Ben Joravsky reported in the Chicago Reader in June 2014, Local 73 gave Mayor Emanuel a $25,000 donation last year. How could Local 73 complain about HCII not remaining neutral when it had given money to the mayor?

"That was before he announced his reelection campaign," Brandon tells In These Times. He says that the donation should not be interpreted as an endorsement of the mayor, as the local has voted to maintain neutrality.

When asked if the donation might be seen as a kind of informal endorsement despite the union's formal neutrality, Brandon says, "People are invited to think whatever they want, but the fact is, there was no vote on the mayor's race until December 2014," when the neutrality vote came from the SEIU Illinois State Council.

"That's really all before the fact—the vote came down [for neutrality] in December, then all of a sudden you've got $250,000" donated to Chuy Garcia—"10 times more than whatever we donated" to Rahm Emanuel, Local 73 communications director Adam Rosen adds. HCII later donated an additional $100,000 to García, bringing the union's total contribution to almost $370,000.

Local 73 staffers say that the other SEIU locals' members are affected by the outcome of the mayoral race differently than Local 73's.

"SEIU Local 73 has 14,000 members who work for the city of Chicago," Brandon says. "The other locals don't have that investment in Chicago. So what we asked was that they consider the impact of any decision on the mayoral race on those members in the city of Chicago. And they absolutely refused."

Brandon isn't convinced by a Local 1 staffer's statement that "this is now a different election."

"There's nothing different about this race except that there are three less people in this race. ... There are 14,000 people in this city who have had the opportunity to express to us, Local 73, their desire to maintain a good working relationship" with Mayor Emanuel.

When asked if he agreed with the characterization of Emanuel as a strongly anti-union mayor, Brandon says, "I totally disagree."

"We just finished successfully negotiating a contract in which almost 4,000 of our members have been guaranteed no layoffs for the next three years. There have been 250 additional people hired in the city of Chicago bargaining unit since the mayor's been [in office]. He's never come out and said he's 'anti-union,' although the way he started out, you would have perceived that." Local 73, Brandon says, "was the first union that felt the wrath of Mayor Emanuel," with a number of layoffs coming shortly after the mayor took office.

"We've been able, for a period of time, to get to a point of dialogue where we've been able to get some gains and maintain some job security for the members of Local 73, and that's very important to us."

Brandon says he finds it regretful that the different locals are carrying out this battle in public.

"It's unfortunate that any disagreements among labor unions are out in the open, but I also think it's important to the members that we serve that they understand the Local 73 is pursuing their interests," he says.