UNITE HERE Considers Itself Progressive. So Why Is the Union Standing with Rahm Emanuel? 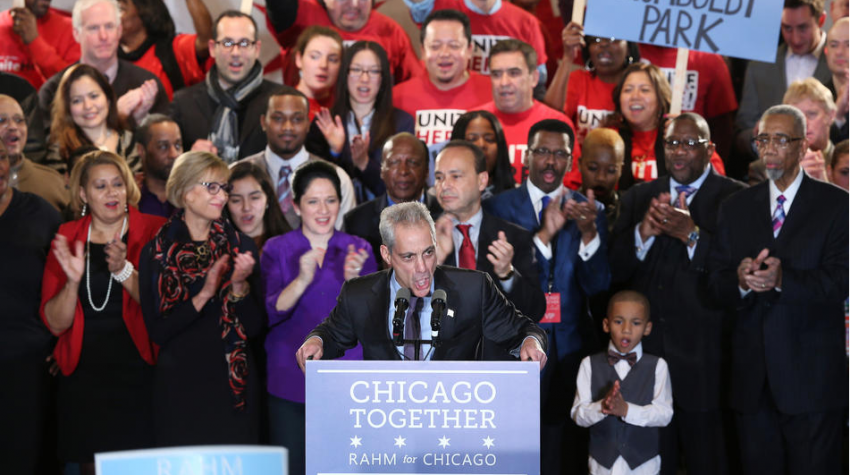 UNITE HERE members and staff, in red shirts, can be seen behind Mayor Emanuel as he spoke after Tuesday's election results came in.

In the winter of 2011, I was running as a delegate to the annual Representative Assembly (RA) of the Illinois Education Association (IEA), the largest teacher union in the state. The 1,000 delegates to the state’s RA had long met at the Hyatt Regency O’Hare in Rosemont. Running as a union delegate in 2011, my platform was simple and concise: “If the IEA RA is held at the Hyatt Regency O’Hare, don’t vote for me because I won’t attend. I don’t cross picket lines.”

UNITE HERE Local 1, who represents the housekeepers and other employees of the Hyatt Hotel chain in Chicago, were engaged in a labor dispute with the company. The downtown Hyatt Regency and North Michigan Park Hyatt were targeted with mass protests and non-violent arrests.

Members of my teachers local and I had joined with hundreds of others demonstrating union and labor solidarity against one of the city’s wealthiest and powerful corporate families, the Pritzkers. The owners of the Hyatt chain, the Pritzker family were prominent supporters and funders of the national and local Democratic Party. Penny Pritzker had been the chief fundraiser for Obama’s first presidential bid, and would soon serve on Mayor Rahm Emanuel’s hand picked board of education; later, she would leave to be President Obama’s Commerce Secretary.

I wrote to the president of Local 1 and asked that a letter be sent to Ken Swanson, then-President of the IEA, supporting my call for the RA to leave the Hyatt for another location. And the IEA did move its convention. So did the National Education Association, which held its 10,000-delegate national meeting in Chicago the next year. Soon after, many other large organizations also cancelled their meeting contracts with the Hyatt.

This history with UNITE HERE makes my disappointment in the union’s support of Rahm Emanuel in the 2015 Chicago Mayoral election that much more bitter.

In service to Mayor Emanuel’s campaign, UNITE HERE produced a slick and, assumedly, expensive video showing Rahm and a group of hospitality workers who are members of the union. Near the beginning of the video, Local 1 President Karen Kent introduces the mayor by saying, “The best city in the world, the best hospitality in the world, [and] the best mayor.”

Watch the slick video and the message is clear: UNITE HERE supports the mayor because he brings tourism to Chicago. That means jobs for the hospitality industry.

What isn’t said is, what kind of jobs? Good paying jobs with good working conditions? That would require a union leadership with fire in its belly—one that does not depend on simply having a good relationship with the mayor.

UNITE HERE has certainly shown such fire in their bellies in the past, as it did in the streets during the last campaign against the Hyatt. But the decision of Local 1 to back Mayor Rahm sends a message that says that cooperation between labor, city and corporate management is the best route for unions to take. Such relationships simply don't exist—at least for the rest of the labor movement in the city. Yet it is a message promoted by a union leadership that seems to have lost its stomach for a fight for good union wages through collective bargaining and solidarity with unions throughout Chicago—rather than cozying up to a union-bashing mayor, assumedly in the hope for future deals that may or may not even benefit the narrow interests of Local 1.

I can’t help but feel that the principal payoff for the Local 1 endorsement was the image of red-shirted UNITE HERE members standing behind Rahm on Tuesday night as he tried to explain his historic failure to avoid a runoff.

Will that photo op pay the rent? Feed their kids? What did it actually secure for Local 1 members?

Compare the UNITE HERE message of cooperation with a virulently anti-labor politician with that of CTU President Karen Lewis at a recent speech to the City Club of Chicago.

The Chicago Teachers Union is currently negotiating its new bargaining agreement. We’re in the early stages right now. We don’t know if the mayor’s handpicked Board of Education will make the same mistakes it made three years ago that sent 30,000 educators to the picket line. If they do, I assure you, we will be prepared.  Ultimately, it is up to them.  We met their threshold before—and we can meet it again.

The threshold Lewis is referring to is the law passed by Democrats in the state legislature requiring a 75% vote of all CTU members in order to strike in 2012. That year, defying all observers’ expectations, over 90% of CTU members voting voted to strike. Lewis is saying, in other words, that the CTU is ready to strike again if Emanuel and the Board of Education push them far enough.

Teachers and other supporters stood in solidarity with UNITE HERE Local 1 in their dispute with one of the world’s largest hotel corporations. Now Unite Here Local 1 has separated itself from the progressive union movement that’s trying to unseat such a viciously anti-worker mayor.