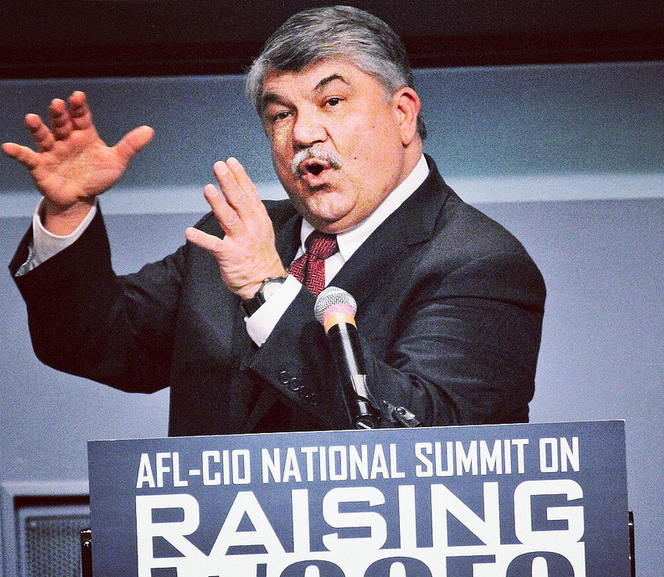 Citing “an ugly history of racism in our own movement,” the leaders of the AFL-CIO voted in late February to create a new Labor Commission on Racial and Economic Justice to examine how issues of race can be better addressed by the confederation’s member unions.

The move was prompted by the riots and related conflicts last year in Ferguson, Missouri, which highlighted the stark racial and class divide in the St. Louis suburb, says Carmen Berkley, Director of the AFL-CIO’s office of Civil, Human and Women’s Rights. The shooting death of African-American teenager Michael Brown by white police officer Darren Wilson inflamed racial schisms nationwide, including within the labor movement, she says. But “we have to have a relationship with the [African-American] community,” that is an improvement over the status quo, Berkley tells In These Times.

Berkley cited an unusually emotional speech delivered by AFL-CIO President Richard Trumka in Ferguson last year in which he said:

We as a movement have not always done our best to support our brothers and sisters of color who face challenges both on and off the job—challenges that you don’t really understand unless you live them.

The test of our movement’s commitment to our legacy is not whether we post Dr. King’s picture in our union halls, it is do we take up his fight when the going gets tough, when the fight gets real against the evils that still exist today.

Trumka’s speech also harkened back to the East St. Louis race riots of 1917, when angry white workers attacked African-American strikebreakers. The labor conflict ignited a wider riot that is judged by historians to be one of the worst outbreaks of racial violence in any U.S. city during the 20th century.

With this legacy in mind, the new Commission will attempt to develop programs to improve communication and cooperation between AFL-CIO unions and African-American communities, Berkley says. The first step will be to convene public meetings in a number of cities to air the important local issues and to formulate responses.

No such meetings have been scheduled yet, she adds, but it is expected that six to eight gatherings will be held within a year. Nor have any specific individuals been named as members of the Commission, although each is expected to the president or chief executive of one the AFL-CIO affiliated unions, she says. In any event, the Commission is expected to produce a formal report to the AFL-CIO leadership, which will then decide what further action is called for.

Patrick White, President of the Greater St. Louis Labor Council, says the commission is a necessary idea. Unions in the St. Louis area have been rattled by the Ferguson developments, he says, including the St. Louis police officers union, which is a member of the city’s labor council even though it is not formally affiliated with the AFL-CIO.

“A lot of the African-American legislators here have called us on the carpet. They want their young people to be included” in job training programs that would help alleviate the chronic unemployment problem in the African-American community, he says. “They are definitely rattling that cage, and they want us to be held accountable.”

St. Louis-area unions have a mixed record of offering opportunity across the color line, he continues. “Our percentages are better than the national numbers—for example we had 33 percent of the International Brotherhood of Electrical Workers (IBEW) apprentice class come from the African-American community, and it’s about 50 percent for the trainees for the police department—but I don’t think we are where we need to be,” White says.

Progress at IBEW and the St. Louis Police Officer Association   notwithstanding, “some of the locals really haven’t gotten out of their own way” and need to open up more opportunities, he says.

In its formal statement on the creation of the Commission, the AFL-CIO Executive Council was careful to avoid to making any specific commitments. It concluded:

The commission will attempt to create a safe, structured and constructive opportunity for local union leaders to discuss issues pertaining to the persistence of racial injustice today in the workforce and in their communities, and to ensure that the voices of all working people in the labor movement are heard. The results of the commission will lead to reports and tools to transform how we think about racial justice issues, and to providing the tools to support these discussions at the city and state levels.

“This is an internal conversation we need to have. This is not [just] a local thing in St. Louis—we see the same issues in communities across the country,” Berkley says. “A lot of the tensions with the black community come from a feeling that they want a piece of the pie,” of good-paying union jobs. Given the low numbers of African Americans in union trades that Patrick White referenced, the feeling seems understandable.