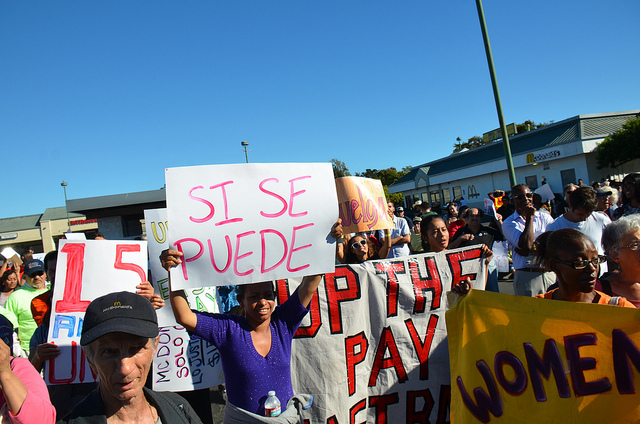 If Douglas Hunter succeeds with his plans on April 15, the public’s attention this year may be diverted from grumbling about taxes to demanding higher wages for millions of low-income service workers—including many who earn so little at their jobs that they need public subsidies for a minimal standard of living.

Hunter, 53, is a leader nationally and in Chicago of the Fight for $15, an ambitious campaign that New York City fast food workers launched two-and-a-half years ago. But other cities picked up the call, then other occupations, from retail workers and childcare providers to adjunct professors. It has caught the imagination of the public as well and notched some notable victories, such as a $15 minimum wage in Seattle and Seatac in Washington state, as well as in San Francisco.

“We can’t wait. Jewel isn’t waiting. People’s Gas isn’t waiting,” he says, referencing a Chicago grocery chain and natural gas utility, respectively. “We need higher wages to support our families. Many people thought we were crazy two years ago when we walked off our jobs in New York and demanded $15 an hour. They don’t think we’re crazy now.”

Workers’ right to form a union free from employer interference, the second goal of the campaign, often gets less attention than the pay hike, and the protest actions have not yet produced a formal national or local union recognized as a bargaining agent by McDonald’s or any other fast food employer. But the movement is already becoming a de facto union through its organizing of workers into aggressive and effective direct action, its attraction of widespread labor and community support and its legal challenges to employer abuse of the franchise model of business organization.

On Tuesday, Hunter, a member of the national organizing committee, led a press conference in Chicago announcing plans for the April 15 protest, billed as “the largest low wage worker mobilization in modern history.” Organizers also describe the event as a strike for many workers, but the planned rallies will involve many who will not actually walk out of their jobs, including community groups, student organizations, social justice advocates (such as #BlackLivesMatter, raising the slogan than “black workers’ lives matter”), and faith organizations (such as religious activists who “fasted for 15” last weekend in Chicago).

Actions are planned for about 200 cities in the U.S. and for allied demonstrations around the world in countries such as Italy, Switzerland, France, New Zealand, Brazil, Japan and Bangladesh, many organized with help from the International Union of Foodworkers, a global union federation.

The low-wage workers beyond the fast food business had distinct complaints but identified with the problems fast food workers have with low pay, unpredictable hours, bad working conditions and unsympathetic managers—circumstances compounded for students who face growing debt for school as they simultaneously work for inadequate pay.

The April 15 rally will include students for the first time from more than 170 universities. “The fight for 15 on April 15 is not just about fast food workers,” Montserrat Cazeres, a student at the University of Illinois at Chicago, who is also a retail worker. “It’s about the future for students like myself. It becomes difficult when you have to choose between what you need for your class or if you’re going to pay your bills.”

Even after graduating, a growing share of university instructors are part-time, insecure, ill-paid adjuncts, such as Matt Hoffman, who divides his teaching among several universities. “Almost one third of us part-timers live near or below the poverty line,” he says. “Faculty across Chicago and across the nation have drawn a lot of inspiration from fast food workers in the Fight For 15. Contingent faculty are in the same boat. We struggle with our bills, we have no benefits, and we have little job stability.”

Many of these conditions have worsened, but what’s remarkable is that this dismal state of affairs has persisted so long with so little protest. Hunter says he can understand how people can change, from grudging acceptance of a miserable lot to a desire for change. An African-American from the city’s west side, Hunter is the single father and sole financial supporter of a 16-year-old daughter. For the past four years, he has worked at McDonald’s, now earning $9.25 an hour.

Hunter only joined the Fight For 15 a year ago. “I didn’t want to join. It took some time. I was committed to my job. I thought I was doing what I was supposed to do. But in reality I was not.” Managers discouraged him from getting involved:  “Don’t be part of it,” they said. “They’re wasting their time.”

But his daughter changed his way of looking at the world.

“My daughter and I were having a discussion one night,” Hunter said. “I was complaining about what I wasn’t able to do. But she said, ‘What are you doing?’ I thought about it long and hard.  I went to work the next day. The organizers came around, and I said, This is something I can do. I want to have a say. And my daughter supported me 100 percent. Now it feels good every day. She feels proud of me. “

As organizers explained his legal rights, and he saw that other strikers returned to their jobs, he grew more confident. He won recognition from other workers, winning positions of leadership, as well as from his daughter and her friends. He also developed a new sense of morality, a view that justified opposition to injustice and challenge to illegitimate authority. The movement also helped open up his social universe and expand his sense of solidarity with workers around the world—which is what Douglas says so excites him about the April 15 actions.

“I remember when we were out at Oak Brook last year,” he said. He was part of a protest on the McDonald’s Chicago suburban corporate campus that involved a sit-in blockade of a street leading to the office complex and arrests for the acts of civil disobedience.

“It was the first time I was arrested for doing something right.” For Duncan, the Fight for 15 has turned into a fight not just for money or a union, but a fight for meaning in his life and a moral community. That fight is part of what will continue to grow on April 15.