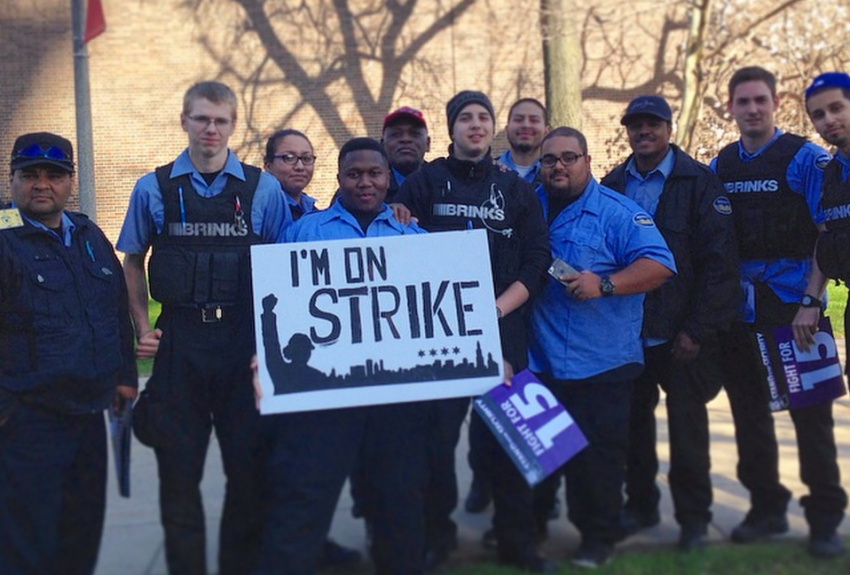 Brink's workers at the Fight for 15 rally at the University of Illinois-Chicago.   (Arielle Zionts)

The Fight for 15 campaign says that yesterday’s protests in over 200 cities around the country were the biggest yet since the movement began almost three years ago. Organizers say their numbers have grown larger with each round of strikes. But they have also expanded in ways that no one, including the campaign’s staffers, thought possible—like when nearly 50 drivers and security guards employed by Brink’s, the global security and logistics company known for its armored bulletproof trucks, suddenly decided to walk off the job early Wednesday morning.

The workers say they made the decision that morning after reaching out to an organizer from the campaign a few days before April 15. After making the decision at their headquarters that morning, they were joined by a group of Fight for 15 staffers and supporters. The workers attempted to present a signed letter to management stating they were going on strike, but messenger John Downes says managers refused to come to the door. Workers have not yet received a response from management.

At 5:00 a.m. this morning, a group of about 20 Fight for 15 staffers and community supporters accompanied a group of around two dozen workers back to work, a tactic which the movement has used after every strike. Workers attempted to deliver another letter to management today that explained their strike, but management instead called the police on the group. Staffers say the workers did, however, successfully return to work.

At the Fight for 15 rally yesterday, driver Johnny Cantu said almost 50 of Brink’s Chicago’s nearly 80 drivers and messengers decided to strike and demand a raise, overtime pay, increased staffing and vehicle repairs. Cantu says that some people think of low-paid workers as “oh, they flip burgers, oh they're just cleaning up the place. … It’s not about that. It’s about people trying to make a living.”

Cantu said his children are working while attending college to help support his family. He said Brinks reduced contribution to workers’ 401(k)s and only pay overtime for five hours per week, even though many workers work 60- to 80-hour weeks; other workers confirmed this story. Downes said new messengers, the workers who carry bags of money or other valuables, make $13.75 an hour while drivers make $12.50. Cantu compared these wages to FedEx and UPS workers who can make over $20 an hour with overtime.

Downes said Brink’s’ trucks are in poor working condition, lacking air conditioning or heat and extremely uncomfortable to drive in, and more workers are needed so employees don’t have to work up to 16-hour days. He also wants to see truck teams of three workers, so one worker can provide security while co-workers deliver the valuable cargo (most trucks only have two workers, a driver and a messenger) and improved safety training. He cited the death of 60-year-old Brink’s messenger Alvin Kinney in Houston this February after armed assailants robbed his truck.

Messenger Alex Alvarez says the company’s management has “led us on, giving us false hope. [They say] … we’re not the bad guys, it’s not up to us, your raise is coming, … just hang tight.” Cantu says workers have communicated these complaints to managers for over a year. After seeing no changes, he says, they decided to join the Fight for 15. Workers and Fight for 15 staffers would not comment on plans to move towards union recognition.

Brink’s spokesperson Ed Cunningham says he “understands employees’ concerns.” He explains that Brink’s works in a very competitive industry and “had to take some actions to cut costs,” so he was “wasn't surprised” to hear of the workers' grievances. Brink’s is attempting to ensure the strike does not affect the company’s customers, Cunningham says, and he hopes to “contin[ue] to try to have a dialogue, understand and resolve [workers’] issues” as soon as possible.

The Fight for 15 has expanded its focus greatly in recent months, going beyond fast food workers to other low-wage workers including home health care workers (many of whom are current or potential members of SEIU, the principal union sponsoring the Fight for 15), higher education workers like adjunct faculty and others. The Chicago Teachers Union recently announced it would make a demand for all Chicago Public Schools employees to earn at least $15 per hour as part of its upcoming contract negotiations with the Board of Education.

But armored security guards have never been a target for organizing in the campaign. A Fight for 15 spokesperson confirms that they still are not.

Nearly 12 hours after they had decided to go on strike yesterday, Brink’s workers—still in their uniforms including bulletproof vests and holsters for guns—joined thousands of fast food workers, union members, community organizations, adjunct professors, home health care workers and supporters to rally at the University of Illinois-Chicago. The crowd then took over the streets and passed by the Board of Trade as they marched to a McDonald's in the Loop.

As the march turned north onto Halsted Street, a reporter approached a group of about a dozen Brink’s workers chanting and holding picket signs. When asked to confirm that the workers had indeed decided to stage the walk-off only that morning, one worker nodded.

“We don’t fuck around,” he stated plainly, then walked away.

Arielle Zionts is a Spring 2015 In These Times editorial intern. She studied anthropology at Pitzer College and radio at the Salt Institute for Documentary Studies. Micah Uetricht is the Associate Editor of In These Times and author of Strike for America: Chicago Teachers Against Austerity.