Adjunct Faculty Around the Country Join Fight for 15 Protests 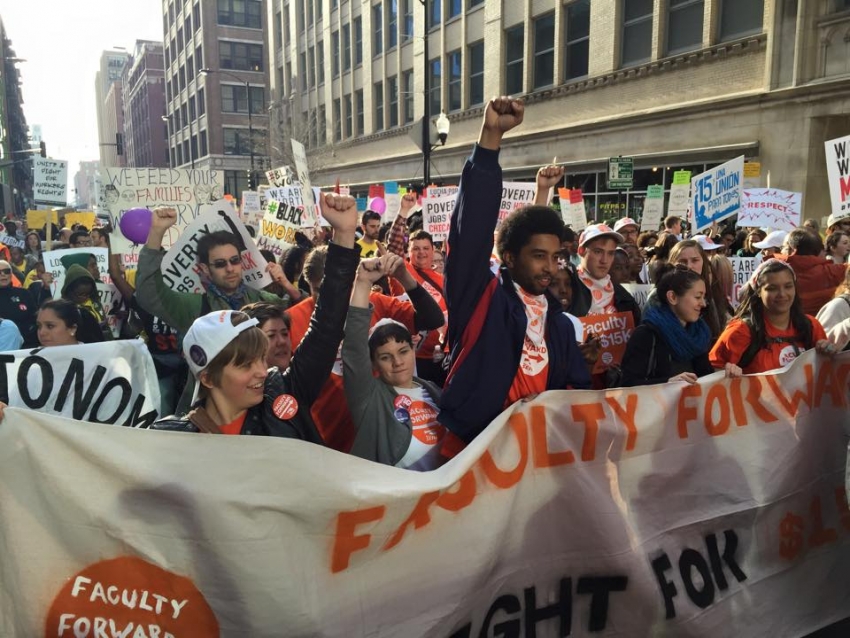 Members of Faculty Forward, a nationwide organization of professors, march through the streets of downtown Chicago with Fight for 15.   (Faculty Forward Chicago)

After speaking to an adjunct instructor participating in yesterday’s massive low-wage worker protests, I thanked her for her time and walked away. Another adjunct, who had been listening on the sidelines as my interviewee talked about her 12 years piecing together part-time work at five different Chicago colleges, approached and introduced herself. “I just wanted to make sure we connected today,” she said to my interviewee before adding knowingly, “It sounds like we have a lot in common!”

A key component of any union drive is workers’ recognition that their problems on the job are shared rather than unique ones, and that they therefore must be solved by collective action. Organizers involved in the growing effort to unionize contingent faculty say that this is often an especially difficult realization for highly educated, low-wage workers who are trained to pursue individual success by putting their noses ever harder to the Ivory Tower’s grindstone.

But that appears to have changed as of yesterday’s walkouts and rallies in more than 200 cities nationwide, in which adjuncts joined fast-food, homecare and other low-wage workers in what organizers say was the largest such protest in history. The day’s actions marked a new phase of the “Fight for 15,” which will head to colleges as contingent faculty press for union representation, a wage bump and greater job security.

Earlier this year, the Service Employees International Union (SEIU), which backs both adjunct and fast-food worker organizing, announced a new campaign called “Faculty Forward,” which will demand a minimum compensation of $15,000 per college course taught, plus benefits. That would be a staggering increase over adjuncts’ current median pay of just $2,700 per course nationwide, but it complements the bold demand of a $15 minimum wage that fast-food workers have been advancing since 2012.

“This is the time to be heard for all low-wage workers,” said Alyson Paige Warren, an adjunct who has worked at Loyola University Chicago and other Chicago-area schools for 12 years, sometimes making as little as $100 per weekly class.

Chicago is one of the most recent cities where SEIU is hoping to organize adjuncts citywide, following considerable success in the Boston, San Francisco and Washington, DC metro areas. While the city’s major public school and several community colleges already have active faculty unions, there are approximately 8,000 part-time and contingent faculty members across the city that remain non-unionized, including at private universities such as Loyola and DePaul.

Ahead of yesterday’s main Fight for 15 protest in Chicago, a group of about 50 adjuncts, students and full-time faculty supporters rallied at Loyola on the city’s far North Side. Carrying signs that read, “Invest in instruction, fight for $15K” and “No more profs in poverty,” the group marched across campus before boarding buses to join an estimated 6,000 demonstrators calling for a living wage.

The group of adjuncts also delivered a petition with 500 signatures to Loyola administrators, urging them to live up to the school’s Jesuit values of social justice by granting instructors fair benefits, fair wages and the right to unionize. Adjuncts at Loyola are not formally demanding $15,000 a course, but they say their current rate of between $4,000 and $4,500 isn’t enough to make ends meet.

They’re not alone. A study released this week by the University of California Berkeley’s Center for Labor Research and Education finds that a full 25 percent of part-time college professors rely on some form of public assistance to supplement their wages. That’s not as high at the 48 percent of homecare workers who received assistance from programs including Medicaid, food stamps, welfare payments or the Earned Income Tax Credit, or the 52 percent of fast-food workers who do so. But it’s a stunning statistic that flies in the face of the assumption that higher education is a path to prosperity.

Paige Warren believes that it’s also a basis for solidarity with other workers, something that adjuncts are increasingly attuned to. “If someone who serves my coffee before I go to teach my students is struggling to make ends meet,” she said, “it’s my job to be concerned about his plight, just as he should be about mine.”