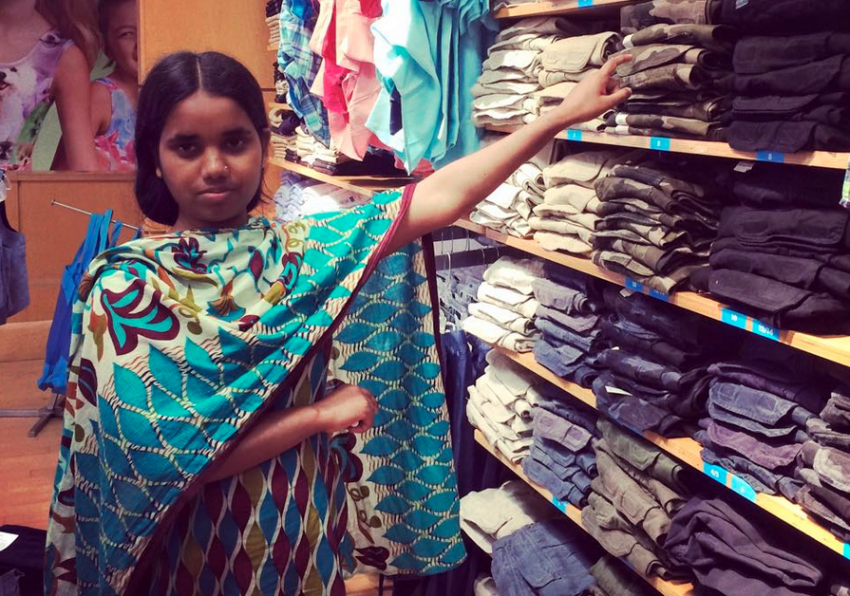 Mahinur Begum, an 18-year-old Bangladeshi garment worker who was completely buried in rubble during the Rana Plaza factory collapse two years ago today, points to pairs of pants on a shelf at The Children's Place—the same pants she sewed while working at Rana Plaza. (USAS)

On February 24 Mahinur Begum visited a Children’s Place store in Miami where she discovered a shelf full of the pants she used to sew at the Rana Plaza factory in Dhaka, Bangladesh—before the factory where she worked collapsed, burying her in debris and killing hundreds of workers around her.

Mahinur was 16 at the time of the factory collapse, and lost a toe when machinery fell on her. She says she continues to suffer emotional trauma from the event. Workers like Begum, along with students and activists across the U.S., are demanding that brands that sourced from Rana Plaza pay fair compensation to workers that suffered from the factory’s collapse and their families. And today, on the two-year anniversary of the factory’s collapse, those activists announced a major victory as The Children’s Place agreed to pay $2 million into that fund after a months-long battle with workers and advocates.

Over 1,100 workers were killed and thousands more injured when the Rana Plaza factory building collapsed on April 24, 2013. The event marked the deadliest disaster in the history of the garment industry. The Rana Plaza building housed five factories that produced clothing for almost 30 western ret­ailers and brands including Primark, Loblaw, Walmart, Mango and The Children’s Place.

According to the International Labor Organization, more than 2,800 claims relating to over 5,000 injured workers and dependents of the deceased had been received by late 2014. By April 2015, around $24 million had been made available for compensation by brands, retailers and other donors. That number falls short of the $30 million dollar goal set for the fund based on the estimated amount needed to cover the claims.

The Children’s Place had come under particular fire for its failure to contribute the $8 million it has been asked to pay to the victims of the collapse. Before today’s announcement, The Children’s Place has contributed only $450,000 to the Rana Plaza Trust Fund. Activist organizations increased their efforts to persuade The Children’s Place to pay in full ahead of the two-year anniversary of the collapse. As a part of these efforts, United Students Against Sweatshops (USAS), a student-labor advocacy group with chapters on more than 150 college campuses, organized a worker tour at colleges around the country featuring Begum and Kalpona Akter, Director of the Bangladesh Center for Worker Solidarity. Akter and Begum joined students for speaking events, deliveries of demand letters and rallies in ten different cities across the country, demanding accountability from U.S. brands for their workers in Bangladesh.

On March 12, 27 students and workers, including members of USAS, the garment workers union Workers United, and the International Labor Rights Forum, along with Akter and Begum, staged at demonstration at The Children’s Place’s headquarters in Secaucus, New Jersey, demanding that the company pay the remainder of the $8 million owed to workers. All 27 protestors, including Akter and Begum, were arrested and charged with trespassing.

A letter issued by USAS intended for distribution at The Children’s Place locations around the country stated that “Mahinur Begum traveled from Bangladesh to share her story with The Children’s Place executives and ask for fair compensation for the health conditions and emotional trauma she now struggles with as a result of the tragedy. Instead of hearing her story and talking about solutions, The Children’s Place had Mahinur handcuffed and arrested.”

Today, The Children’s Place agreed to contribute an additional $2 million to the Rana Plaza Donors Trust Fund. An announcement on the USAS Facebook page reads, “After two years of campaigning, The Children's Place has agreed to pay $2 million into the Rana Plaza Donors Trust Fund to compensate the victims of the collapse.” Julia Wang, a National Organizer for USAS, further adds, “This contribution came after hundreds of actions across the country at Children’s Place stores.”

The Children’s Place isn’t the only company that has faced heat for refusing to put adequate money into the fund—Benetton has also come under international pressure in the aftermath of the Rana Plaza disaster. The company has also given to the Rana Plaza Trust Fund, but far less than the amount allegedly owed based on its level of production in the factory at the time of the collapse. The Financial Times recently quoted Toni Airoldi, chief executive of Benetton, as saying that because brand contributions were voluntary and undisclosed, “Only a miracle would have brought $30m.”

While supernatural intervention may not be in the cards, companies like Benetton can certainly expect to see escalating action from frustrated students and workers angry at the brands’ lack of action as workers and their families continue to go without full compensation two years after the Rana Plaza collapse. In the past year, other brands like the North Face and Jansport—by way of their parent company, VF Corporation— have also been the targets of protests at stores where they are sold as a result of VF’s failure to sign onto the legally binding Accord on Fire and Building Safety in Bangladesh.

USAS chapters around the country are also asking their colleges and universities to help “End Deathtraps” in dangerous factories like Rana Plaza and require that all brands producing college-logo apparel sign the accord as a condition of doing business. Twenty-six schools have required the licensee companies who produce their apparel to sign since the start of the campaign, and 16 universities have ended contracts with JanSport as a result of VF’s continued refusal to sign the Accord. This campaign has led to several sit-ins in the offices of university presidents. A sit-in at the University of Oklahoma on April 7th culminated in the university agreeing to cut ties with VF Corporation. Students at the University of Louisville have been occupying a building on their campus with the same demand since April 20.

USAS’s Wang sees the effort to secure compensation for survivors of the Rana Plaza collapse and their relatives as addressing the immediate and essential needs of workers, while action around the accord takes a longer view.

“The long-term solution to ensure that these types of disasters never happen again is getting brands to sign the accord and remediate unsafe factories. The brands that are being targeted are collegiate brands who have substantial production in Bangladesh who have refused to thus far sign the Accord,” she says.

In the meantime, Wang is confident that with enough public pressure, more brands like The Children’s Place will pay compensation to victims of the Rana Plaza Collapse in the near future. “Hopefully this will spur other brands to do the same,” she says.