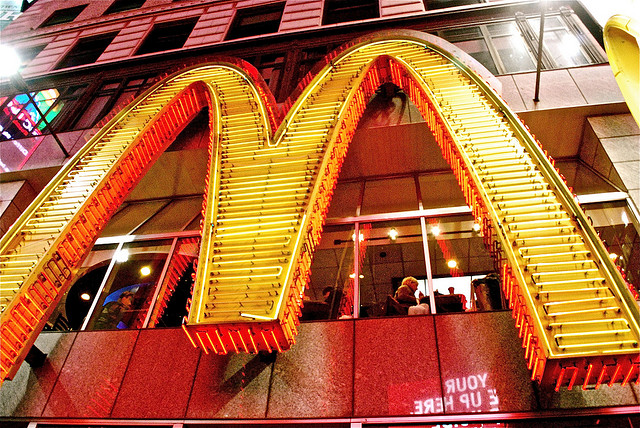 The case could open the door to unionizing McDonald's restaurants around the country. (Miguel Vaca / Flickr)

Lawyers representing the company, its franchisees, the Service Employees International Union (SEIU) and the government met to discuss the future of a case that could lay the groundwork for union representation and collective bargaining at the country’s largest fast food brand.

McDonald’s “entire business model is put at risk” by the litigation, Jones Day’s Willis Goldsmith told Administrative Law Judge Lauren Esposito during the three-hour hearing. If Esposito finds that the company’s oversight and workforce management policies make it a “joint employer,” as the charging parties contend, it could be held responsible for the working conditions in its franchised stores. Nation-wide, 90 percent of McDonald’s stores are owned by franchises.

During the hearing Esposito required McDonald’s to deliver over 700 documents relating to the structure of the corporation to the government and the union.

“The evidence will show that McDonald’s directed or helped direct how to deal with employees at the franchised facilities in response to protected activities,” said Jamie Rucker, General Counsel for the NLRB.

If the judge found coordination that established joint-employer status, the Board would be able to hold McDonald’s liable for illegally retaliating against workers who engaged in activity protected by the National Labor Relations Act in the Fight for 15 protests and organizing campaign, and eventually to be named as a party in collective bargaining for those stores.

But before that can happen, the board must prove that both McDonald’s and the owners of its franchised stores “share or codetermine those matters governing the essential terms and conditions of employment” or “meaningfully affect” employment issues such as hiring, firing, discipline, supervision and direction of work. The Board believes it can prove joint employer status with information from the shift scheduling software the company provides to its stores, as well as communications between company and individual locations. Evidence and testimonials are to be presented beginning May 26.

“McDonald’s is a complicated company”

Asked about the exact relationship between McDonalds Illinois, the subpoenaed store, and McDonalds USA, the national company, Goldsmith explained that “McDonald’s is a complicated company.”

The Board and the unions also requested details about McDonald’s USA’s corporate structure. But Jonathan Linas, also of Jones Day, explained that finding that information would not be so easy. “There’s no one organizational chart,” Linas said.

“The entire organizational structure of McDonald’s USA will not be produced,” he said. “I don’t know [if] it exists. We’ve been looking a long time and we don’t have one.”

The stakes of the proceedings are high and McDonald’s has hired the law firm Jones Day, which oversaw the bankruptcy and restructuring General Motors and the City of Detroit, to lead its defense.

McDonald’s business model in part rests on its exemptions from liability for the working conditions at its franchised stores. But even if these exemptions were to change, it is unclear what the implications for the rest of the fast food industry would be.

First, a finding of joint-employer status would have to survive in federal court, an institution notoriously unfriendly to workers’ collective action. And then it would only apply to the specific locations and conditions named in the complaint.

“As soon as there is some kind of a determination that an employer is a joint employer, the company just restructures the relationship,” says Michael Duff, a law professor at the University of Wyoming who worked at the NLRB for nine years. “And then you get another round of litigation.”

Because the joint-employer status would only apply to franchises named in the consolidated case, Duff explained, organizing campaigns through the NLRB could only occur at those stores. However, he added, an expanded joint employment standard could facilitate organizing at other similar franchises in the future.

“Once you have a broader way of thinking about the employment relationship, it opens up more kinds of workplaces to the credible allegation that this is a joint-employer relationship,” said Duff.

The charging parties are skeptical that McDonald’s workforce management systems can be restructured. Citing an April 2014 statement by then-CEO Dan Thompson, they allege the company has responded to falling profits with a “reset” plan that requires the company to take greater control of staffing and scheduling to maximize in-store revenues.

In its defense, the McDonald’s is arguing that any coordinated response at its franchised stores against protected activity was lawful-employer free speech, protected under the NLRA.

Under the 1947 Taft-Hartley amendments to the Act, Goldsmith explained, McDonald’s has “the absolute unfettered right to engage in non-coercive free speech in response to attacks on the brand.” Coordination on these grounds, he argued, does not constitute joint-employer status.

To establish its case, McDonald’s subpoenaed information on the internal workings of SEIU’s campaign, including internal documents from the union, the public relations firm Berlin Rosen and two investigative firms.

“We are entitled to find out who they talked to and what they spoke about,” Goldsmith said, referring to one of the investigative firms hired by the SEIU which may have spoken to workers. The union countered that revealing the insides of its campaign would have a “chilling effect” on organizing, as the fast food corporation could threaten those revealed with retaliation.  On Thursday, April 10, Esposito revoked the subpoenas against SEIU and the third parties.

The pace of the proceedings since workers began protesting in 2012 also gives some sense of the scope of the campaign drive being led by SEIU.

Since November 2012, at least 310 charges of illegal retaliation against workers engaging in protected activity have been filed by workers and their representatives. Over 100 of these charges have been found to have merit, and as of February 13, the Board had filed 19 complaints across 14 administrative regions across the country—offices in Los Angeles, San Francisco, Phoenix, Minneapolis, Kansas City, St. Louis, New Orleans, Chicago, Detroit, Indianapolis, Pittsburgh, Atlanta, Philadelphia and Manhattan. As the protests have continued, so have the unfair labor practice charges filed by the union.

If McDonald’s is found to have coordinated a national response to protesting workers, as the Board is arguing, that could prove that the company exercises more control over the workers in its stores than it claims.

Such a finding would be initially limited and establish a legal basis for collective bargaining at just a handful of stores. However, the finding could facilitate traditional NLRB organizing across the heavily franchised service sector, forcing the company to bargain with workers who opt for union representation.

SEIU has made a considerable investment (“over $18 million at least,” said Goldsmith) in an open-ended campaign with little promise of immediate returns. The current case in front of the NLRB shows that the union is far from guaranteed from obtaining new dues-paying members any time soon, making the union’s investment an incredibly risky gamble—something most unions would be loathe to even consider.

The campaign has sparked a nation-wide movement that has already won minimum wage increases and raised entry-level pay for workers across the retail and fast food industries. Whether that momentum will translate into joint-employer status or fast food worker union membership may depend on the ruling handed down in Judge Esposito’s courtroom.