Union and Nonprofit Leaders: Labor Should Shift Its Focus to Organizing Black Workers 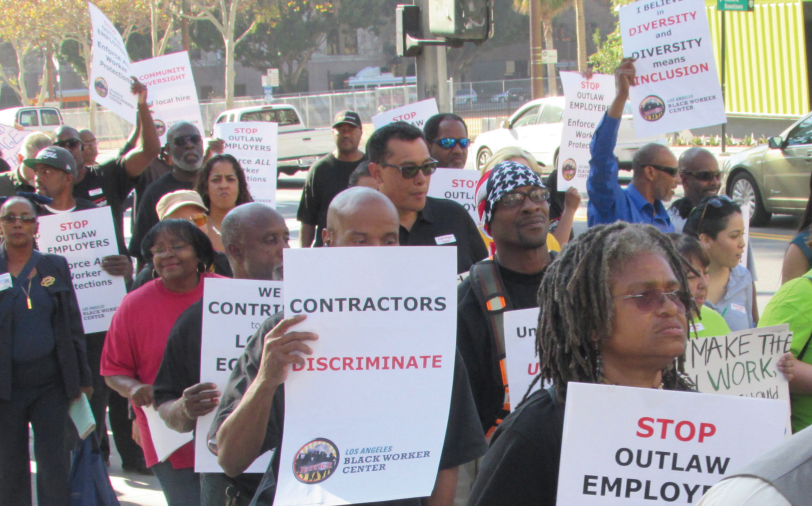 Labor leaders are urging a focus on black workers to rebuild the labor movement. (Discount Foundation)

In 1956, as Martin Luther King Jr. and Bayard Rustin struggled to sustain the historic boycott of segregated public transit in Montgomery, Alabama, Rustin turned to the union leader A. Phillip Randolph for advice. The carpool for black workers was faltering. “Go up to Birmingham,” Randolph told them, “where the steel workers are making enough to afford two cars. Ask them to donate their second car.” According to historian Judith Stein, King reported the steel workers saved the boycott.

At their height, American labor unions proved an invaluable resource to the civil rights movement—through both financial security, which helped enable private activism, and the institutional funding of organizations like SNCC and events like the 1964 March on Washington. Today, despite years of decline, the labor movement continues to provide economic stability in many black communities. Of all demographic groups, black workers have the highest union membership rates.

These historic ties have led some to see black workers as a cornerstone to any effort to rebuild a movement in deep decline. And drawing from the national momentum of organizing around police reform, many black labor leaders today are leading the charge. On Friday, May 1, black labor and community leaders met at Columbia University for the third-annual State of Black Workers in America Conference, where they made this case to an audience of philanthropy staffers and activists.

“We’ve got to resist the black jobs crisis,” said Lola Smallwood Cuevas, director of the Los Angeles Black Worker Center. “Our movement sees the deep connection between economic justice and racial justice, and what that means for the safety of our community, particularly young black men and women.”

Nationally, black unemployment is more than double white unemployment. Cuevas points out the tremendous wealth gap between white and black families—median household wealth is $142,000 for whites, while only $11,000 for blacks—and says, “We’re living through the same poverty that’s been with us since after Reconstruction.”

The conference also occasioned the release of two reports on black leadership in labor unions and nonprofits, and served as a pitch for philanthropy to begin investing in a new wave of black-led organizing.

“I am hopeful that this [conference] is an indication that there is an opening in philanthropy to support race-conscious efforts to organize black workers and communities,” said Susan Wefald, Executive Director of the Discount Foundation, which is hoping to spark increased funding in black-led nonprofits as it spends down its endowment this year and closes its doors.

Beyond philanthropy, the conference highlighted the critical role union jobs have played in building the black middle class. “Because black women disproportionately are single heads of households,” said Kimberly Freeman Brown, the lead author of one of the reports, “their income, their economic stability, their retirement security—that determines the community’s security.”

Deindustrialization and austerity have taken away much of that security. To cite one city, between 2010 and 2015 Baltimore lost nearly 9,000 government jobs according to the Bureau of Labor Statistics, despite a growth in population. Since 1990, the earliest data available, the city has shed over 17,000 public sector jobs, a rate slightly higher than the city’s population decline during the same period.

Responding to this crisis means enlisting the black community to protect the public sector against budget cuts and right to work, says Pierrette Talley, Secretary Treasurer of the Ohio AFL-CIO. “When you first look at the policy of the elimination of collective bargaining rights for public employees, it appears to be race neutral,” she said, recounting the labor-led campaign against the 2011 Ohio law SB 5, which strongly limited collective bargaining rights for public employees. (A massive campaign by unions in the state eventually repealed the law.) “But when you looked closer, of the 350,000 public sector workers that were under attack in Ohio, twenty percent of those workers were African American.” Less than 14 percent of Ohio’s total population is black.

But the simplest response to the black jobs crisis urged at the conference is for unions to organize black women workers.

“Black women want to be organized,” said Freeman Brown, citing research conducted by Kate Bronfenbrenner, as well as her own survey of nearly 500 black women in organized labor and worker centers. Disaggregating NLRB data from the late 1990s, Bronfenbrenner found that women of color have the highest union election rates among all workers, winning 82 percent of union elections when they made up three-quarters of the bargaining unit. This is in part because majority-women workplaces tend to be in the low-wage service sector—workplaces least vulnerable to outsourcing—where workers stand to win much through collective bargaining.

Many panelists argued that investments in black women organizers are a much-needed catalyst for union growth. “Black women want to be organized by other black women organizers,” said Freeman Brown, citing Bronfenbrenner, who found that when the organizer was also a woman of color, union election win rates for majority-black bargaining units jumped to 89 percent. “It’s not just that they want to see other people that look like them,” Freeman Brown explained. “The black community has been promised so much and has received so little, that there is often a high degree of mistrust [of white organizers].”

And it is not only union leaders who stand to benefit from black worker activism. Because significant numbers of black workers are located at some of the key strategic nodes in the American economy, many have tremendous leverage to affect employers’ bottom line, allowing them to negotiate better wages and working conditions from a position of strength.

“Warehousing and transportation has one of the biggest concentrations of black workers of any economic sector,” says Mark Meinster, Executive Director of Warehouse Workers for Justice (WWJ). “There’s about 1.5 million—the concentration’s bigger than retail, it’s bigger than healthcare. A quarter of all forklift operators in the United States are black.”

Meinster, who is white, has worked for five years organizing among the 120,000 warehouse workers who staff the national retail supply chain centered in Illinois. He says the black workers at the bottom of the industry pay scales have always been a critical part of the campaign.

Whereas working in a warehouse was once a high-wage union job, in the past two decades there has been a massive explosion of non-union temp employment, with around 80,000 temp workers in the local industry, according to Meinster. The remaining direct hires are often subjected to “structural discrimination” including the “misuse” of criminal background checks, forcing much of the black workforce into the temp agencies that pay as much as $6 an hour less in wages. “That bottom rung is now being occupied by formerly incarcerated black workers,” Meinster says, explaining that “criminal background checks are now really becoming a management strategy to depress wages.”

Nearly half of the temp warehousing workforce is black, he says, and “every year the proportion has gone up and up and up.”

Because of the standardization of the temping strategy in the warehousing industry, Meinster’s organization has had to use race-conscious efforts to organize those with the most to win from collective action. Warehouse Workers for Justice has a black caucus, and the new strategy means developing black leadership in the campaign to transform the low-wage economy.

But opening employment to former inmates won’t be enough to recreate the high-wage jobs that once sustained the black middle class. As Meinster notes, “There are few instances in industrial economies where policy advocacy, workforce development strategies and relying on good-hearted employers alone have worked to transform an entire low-wage sector.” In 2012, warehouse workers supported by Warehouse Workers for Justice led a three-week strike which culminated and a civil disobedience action by warehouse workers and community supporters in Joliet and Elwood, Illinois, “greatly impacting” the Walmart supply chain throughout much of the Midwest. Workers say they may have cost the company millions of dollars.

In the years since, wages in that warehouse have risen dramatically, says Meinster, with starting wages moving from $8.50 per hour to around $12, and warehouse operator Schneider Logistics has committed to phasing out the use of temps, moving to direct hire positions that earn around $16.

“At some point you have to challenge capital directly, and that means looking at those areas of the economy where workers have potential economic power. One of those is warehousing,” said Meinster.

Doing so won’t just mean more stable jobs at higher wages for only black workers. As Smallwood Cuevas says, “the conditions that were once unique to the black community are broader.” The loss of unionized, high-wage jobs, while particularly dear to the black workforce, has affected neighborhoods of every color. “It impacts everyone now. If the black jobs crisis is allowed to exists, where over 50 percent of some communities are allowed to be unemployed, it will also undermine white families,” she says. “These conditions will end up suburban Illinois, where we’ve seen them, in Appalachia, in Virginia.”

“If we want to rebuild our economy,” she says, “we have to start with the black community.”