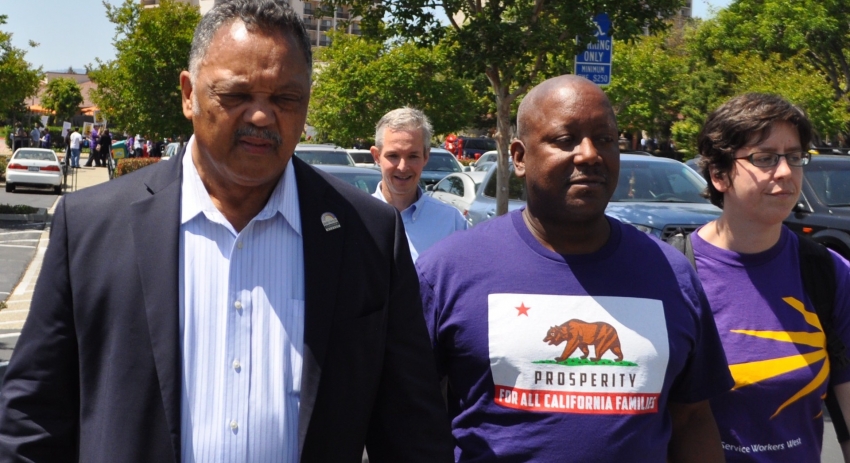 Reverend Jesse Jackson joins Silicon Valley security officers for a rally against Broadcom offices on May 5. (Stand for Security)

On May 5, Silicon Valley security officers rallied outside the office of Broadcom, a wireless-component maker (which produces the WiFi chips in Apple iPhones), in hope of drumming up support for an organizing campaign at the company's security subcontractor, Universal Protection Service (UPS). They were joined by a high-profile supporter: Rev. Jesse Jackson.

“We must confront income inequality in Silicon Valley,” says Jackson, who has launched a campaign to diversify the tech industry. He calls the valley “an oasis for some, a desert for others.”

UPS’ Silicon Valley security officers began organizing three years ago, after comparing the wages and benefits of largely non-union officers in Silicon Valley with those of the 5,000 officers unionized by SEIU-USWW in the San Francisco Bay Area, just 50 miles north. The Bay Area security officers get paid time off and other benefits as part of their contract with the union, and SEIU-USWW estimates that union contracts have increased their wages by nearly 40 percent since 2003, with $3,432 guaranteed increases in annual income over the next two years; Silicon Valley officers have none of these assurances.

Instead, they have instead seen drops in job security and guaranteed wages, says Michael Johnson, a UPS security officer who has been doing security work in Silicon Valley for 10 years.

“When I first started, security companies used to compete by the variety of services and the talent of their officers,” he says. “Now, they are just trying to compete by being the lowest-priced bidder—they’re following the Walmart model.”

Silicon Valley is one of the wealthiest metropolises in the nation. But, according to a 2014 analysis of Census data by Working Partnerships USA (WPUSA), a think tank associated with the South Bay AFL-CIO Labor Center, the valley has an “invisible workforce” of primarily Black and Latino contract workers who can’t make ends meet.

WPUSA found that Blacks and Latinos constitute 41 percent of Silicon Valley’s private security guards, 72 percent of its janitorial and building cleaning workers, and 75 percent of its grounds maintenance workers, with respective median wages of $14.17,  $11.39, and $13.82. Working 40 hours a week at these rates, the study found, is not enough to cover even rent in Silicon Valley, which averages $2,321 a month.

“Michael Johnson is just one of thousands of the many hardworking service workers that keep the tech economy running, yet barely scrape by because of the low wages their employers pay them,” says Rev. Jackson.

By contrast, Blacks and Latinos hold only 3 to 4 percent of Silicon Valley’s lucrative “core tech” jobs, with median wages of around $60 an hour, according to WPUSA’s analysis of companies that have disclosed racial demographics.

WPUSA Executive Director Derecka Mehrens described the situation as “economic and occupational segregation.” And Mehrens places the blame squarely at the feet of the tech companies, most of which rely on subcontractors for their janitors, maintenance workers and security guards. “They deny responsibility for the working conditions of the vast majority of [the] African American and Latino workers [at their sites],” Mehrens wrote in a 2014 statement released with the WPUSA study. “There are simply no standards for their subcontractors.”

The AFL-CIO’s South Bay Labor Center, a coalition of 90 local unions (including SEIU-USWW), has sought to hold tech companies accountable with a “Silicon Valley Rising” campaign launched in February 2015. Connecting their struggle to the one fought by Cesar Chavez for farmworkers in the same region half a century ago, the coalition of unions and community organizations aims to unite the “janitors, food service workers, maintenance workers, security guards, and shuttle bus drivers who help build and sustain the tech economy.”

Efforts of campaign members have not only resulted in the unionization of shuttle bus drivers at Facebook and Ebay, but also gains for security officers at some of Silicon Valley’s largest tech giants. This March, Apple agreed to go in-house with its security, bowing to protest by SEIU and security guards over the tech-giant’s contract with a Security Industry Specialists, a company allegedly known for anti-union tactics. Google had previously decided to kick the same company to the curb a few months before that, allowing the 200 previously contracted employees to be full Google employees eligible for company benefits. The in-house security officers at both companies now have access to full health insurance, retirement contributions, and other benefits previously afforded to the rest of Google and Facebook’s full-time employees. On Tuesday, Facebook announced it will be implementing new standards for contracted workers in 2015, including a $15 minimum wage and $4,000 child care bonus for workers who don't receive paid parental leave.

A seat at the table

The May 5 rally was prompted by UPS’s dismissal of Johnson, a leader in the organizing campaign, from Broadcom in early April. SEIU has filed a complaint with the National Labor Relations Board alleging Broadcom requested Johnson’s removal in retaliation for his organizing activities.

Two days after being removed from his post, Johnson delivered a petition to UPS for union recognition, signed by 75 percent of the UPS security officer workforce. Thus far, Johnson says, UPS has refused to recognize the petition.

The rally was part of a broader strategy to push UPS to recognize the union by enlisting the support of the high-tech clients UPS services—a strategy similar to the one used at Apple and Google.  “[UPS] says they’re here to serve the customer,” says Johnson. “So we must go to the customers so they can talk to UPS.”

UPS has seen explosive growth recently, with 35 security company acquisitions in the past four years. It crossed the billion dollar revenue mark in 2014. Yet workers have seen none of those profits, according to SEIU-USWW. The union describes the company’s growth strategy as corner cutting and profiteering at the expense of workers.

“If you talk to these guys at Apple or Broadcom or any of these high tech companies, they will tell you they made these big profits because of their innovations—their employees are willing to burn the midnight oil to innovate and develop these new products and services,” Johnson says. “[Service workers are] the ones that are creating the environment for all this stuff to happen. We’ve made a valuable contribution to the profit these guys are enjoying, so why shouldn’t we participate in the prosperity?”