30,000 Teachers Walk Out in Protest of Big Class Sizes in Washington State 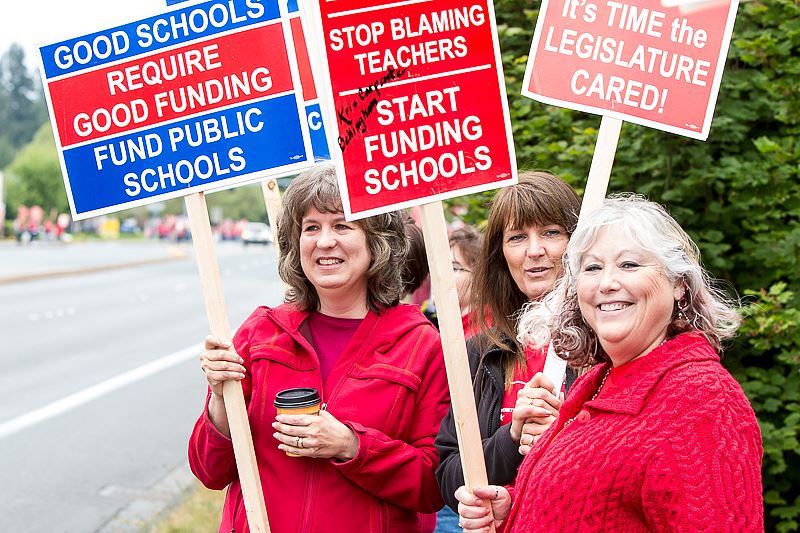 On Tuesday, May 19, thousands of demonstrators marched through downtown Seattle to support a rolling strike by public school teachers across Washington state. The teachers are protesting what they say are unacceptably high class sizes and low pay, stemming from their state legislature’s failure to fully fund public education.

Six thousand teachers and supporters from Seattle Public Schools and the nearby districts of Mercer Island and Issaquah shut down intersections for blocks in the largest coordinated action since the rolling walkout began on April 22. In total, at least 30,000 teachers in 65 striking school districts have participated in one-day strikes.

The strike is unusual in that the teachers are not pressuring their respective school districts, but rather targeting the state legislature for its unwillingness to fund education enough to decrease class sizes and increase teacher compensation. Popular signs at rallies across the state have read “Educators care for our kids every day - It’s time the legislature cared” and “On strike against legislature - stop blaming teachers - start funding schools.”

On the class size and funding issue, union members say they have both the courts and the voters on their side. In 2012, the state Supreme Court ruled in McCleary vs. Washington that the legislature had failed in its constitutional duty to “amply provide for the education of all children within its borders” and ordered it to implement adequate funding increases by 2018. Last September, the Washington Supreme Court found the legislature in contempt of court for failing “to provide the court a complete plan for fully implementing its program of basic education,” warning lawmakers that the legislature would be “sanctioned” if it did not develop a plan by the end of the legislative cycle.

Compounding this legal pressure is the binding initiative 1351 approved by voters in November 2014, which calls for a 20 percent reduction in class size and the hiring of 15,000 teachers over the next four years, according to advocates of the initiative.

While both legislatures have put forward proposals to fund class size decreases up to the third grade, none have proposed fully funding initiative 1351. Gov. Jay Inslee has called for two consecutive special sessions to address the funding issue and other budgetary matters before a July 1 deadline. If they don’t resolve the budget, legislators risk a government shutdown.

Jesse Hagopian, a history teacher at Garfield High, says that teachers’ “backs are to the wall,” necessitating collective action.

“The old strategy of supporting politicians and hoping that they will enact pro-education policies has not worked for so long that it has actually caused a state of crisis for our union as a whole,” he says. “It's reached a level of absurdity. I think [lack of support from the legislature] made [WEA] leadership more willing to back some of our smaller locals that began this one-day strike wave in the state.”

The strikes have been primarily organized by teachers union locals, rather than by the statewide union. On the eve of the first strikes in late April, a WEA spokesperson told Washington’s News Tribune that it was up to locals to “decide how big the protest gets this year.” What began with eight districts has now swelled to 65.

The legislature’s unwillingness to go fully fund I-1351 and adhere to McCleary has galvanized teacher in a way that Susan DuFresne, a kindergarten teacher at Maplewood Heights Elementary, describes as “truly grassroots.”

Indeed, Washington has the nation’s most regressive tax structure, according to a study published in January by the Institute on Taxation and Economic Policy. The study found that the state’s top 1% contributes 2.4 percent of family income in state and local taxes while the poorest 20 percent contribute 16.8 percent, making Washington the “highest-tax state in the country for poor people.”

Meanwhile, the state’s largest corporations have received eye-popping tax breaks in recent years: In 2014, Boeing was awarded the single largest tax break a state has ever given a company: an $8.7 billion cut. Microsoft reportedly avoided $528 million in state taxes between 1997 and 2008 due to lax legislative oversight concerning the company reporting its revenue through its licensing office in Nevada, despite basing its software production in Washington.

At the same time, lawmakers have suspended voter-approved cost-of-living increases for educators every year since 2008. Washington’s teacher pay now ranks 42nd in the nation. Teachers also say that legislatures are undermining their job security by introducing legislation that would tie state standardized tests to teacher evaluations. This has helped push hundreds of educators and students across Seattle high schools to boycott the tests, placing the city at the vanguard of a larger emerging wave of test boycotts across the country.

WEA members say that if legislators don’t resolve funding issues by the end of the second special legislative session, rolling strike waves will begin again when school begins in September. Hagopian expects even wider support from teachers at that time.

“I can’t imagine that after feeling the collective power that we found in the streets on Tuesday when we walked out,  that teachers would just go quietly back into the classroom and submit to the humiliation of being in one of the richest regions the world has ever known and seeing kids come to school without basic supplies and ballooning class sizes,” he says.