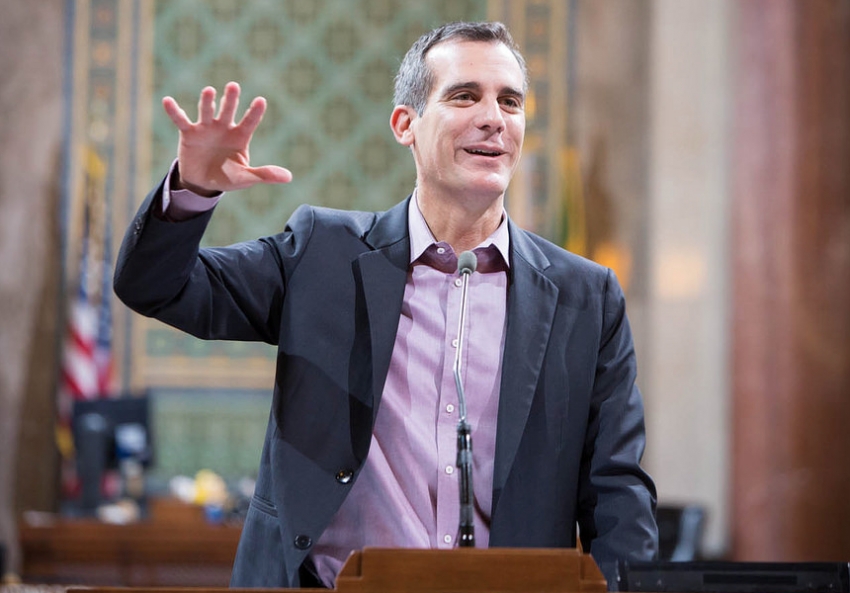 On June 13, Los Angeles Mayor Eric Garcetti signed the city’s landmark $15 minimum wage into law. Although the city’s workers won’t be seeing that full figure until 2020, the new law will bring billions of dollars into the pockets of at least 36% of the workforce, and should be seen as the culmination of grassroots action supported by a coalition of labor groups such as Raise the Wage and Fight for $15.

But in the aftermath of its initial approval a few weeks ago, right-wing pundits, with help from mainstream news outlets, succeeded in pitting minimum-wage activists up against labor leaders, drumming up charges that the unions were acting to actually undermine the minimum-wage-increase movement. Rusty Hicks, the head of the Los Angeles County Federation of Labor, had to save face after he led a failed last-minute push to include a clause into the city’s minimum wage ordinance that would allow employees the option of having their collective bargaining agreement supercede the local minimum wage policy.

Opponents have argued that the provision potentially allows for unions to negotiate contracts that include wages below the minimum, and that unions would use the wage carve-out to offer a kind of carrot to employers in exchange for allowing the union to gain new members—assumedly leaving new union members earning, in total, less than the minimum wage.

Mostly due to the inability of Hicks or anyone else in the city’s labor movement to offer a strong and convincing rebuttal to these charges, this talking point has largely taken hold. With labor at the front of Fight for $15 battles in Los Angeles and across the country (Hicks himself has been a leader in Los Angeles’s Raise the Wage coalition), pundits on Fox News have spread the idea that “big labor” could be trying to get around the minimum wage that “they tried to impose on others.”

“They want to make unions basically the cheapest labor and have more money for themselves—that’s what this is all about,” libertarian journalist Michelle Fields told host Eric Bolling on the conservative network on May 30.

It’s an easy talking point to run with, and admittedly the optics of it are pretty bad. But those trashing the union’s attempt to insert the provision have failed to realize the nuances of the situation. Glancing at the data of union workers’ compensation in cities that already have such wage exemption provisions on the books, as well as applying a bit of logic in thinking about why a worker would vote to join or choose to stay in a union, show that such provisions haven’t and won’t result in unionized workers earning below the minimum wage, and in fact can serve to protect minimum wage increases from legal challenges from business interests.

Why do workers organize?

To explain why this is the case, let’s examine some of the arguments against the provision. The U.S Chamber of Commerce, often labor’s foe, outlined a modern history of minimum wage policy and the union carve-out in a study they published last year. The study suggested that what the Chamber calls the “union escape clause” is nothing more than a ruse to gain “new members, new dues revenue, increased political clout, and, most likely, increased payments into its pension fund.”

The Chamber’s study points to hotel worker union UNITE HERE’s explosive growth in San Francisco (where minimum wage ordinances have typically included “union escape” provisions) as an example of a “real-world correlation” between the provision and labor’s supposed self-interest:

UNITE-HERE Local 11, which represents hotel workers in Los Angeles, California, saw its membership and revenues jump after the city included a union escape clause in a minimum wage hike on hotels. Local 11’s membership increased from 13,626 in 2007 to 20,896 in 2013, while its revenue increased from approximately $7.5 million per year to nearly $12.7 million. … When San Francisco, California, passed a citywide minimum wage ordinance with a union exemption in late 2003, membership in UNITE-HERE Local 2 rose from 8,000 in 2004 to more than 14,000 in 2013. Notably, these increases occurred as union density nationally declined from 12.9% of the workforce in 2003 to 11.3% in 2013.

Reading the Chamber’s study, you would think that the principal reason UNITE HERE membership in LA and San Francisco grew during this time was the wage carve-out. But that’s absurd, and doesn’t reflect the way workers join unions or how union membership grows in general.

In case the Chamber has forgotten, workers are the ones who choose to join unions, either through a secret-ballot vote or through a “card check” process. And if they don’t like their union, they can vote to decertify it. If workers joined a union and paid dues to it every month but continued earning a wage below the minimum after they joined, why wouldn’t they vote to leave the union? They would have no financial incentive to stay, and assumedly UNITE HERE’s membership would be tanking rather than growing as workers realized they were getting a raw deal and voted to leave the union.

But of course, rather than seeing their compensation tank, hotel workers are seeing their wages and benefits increase as union members. UNITE HERE says that its members in San Francisco—remember, a city with the minimum wage carve-out for union workers—earn, on average, an hourly wage of $20.94. The deal also gets sweeter for those members when quality-of-life benefits like secure hours and compensation packages are included.

In Los Angeles, where the union’s members are also allowed to have their collective bargaining agreement supercede local wage ordinances, union workers earn slightly less, $16.47 plus benefits. Still, union workers’ wages alone are higher than the $15.37 wage floor enacted for hotel workers last year; when you include the benefits those workers typically receive through their collective bargaining agreements that most minimum wage earners do not have a right to, the total compensation becomes even higher.

Beyond hotel workers, the numbers make it clear that union workers earn on average considerably more than the minimum wage, even in cities that have these carve-out provisions. A 2014 study by the Institute for Research on Labor and Employment at UCLA reports that, when adjusted for cost of living, hourly earnings for union workers in Los Angeles stand at $20.35, whereas their nonunion counterparts earn $16.13. Clearly, few union members in the city earn less than minimum wage.

Hicks remarked at a recent press conference, “Unfortunately, too many in today’s society do not have the benefit of being a part of a collective bargaining opportunity or experience, so it can be confusing.” The confusion might have been cleared up, however, with a few concrete facts showing how collective bargaining helps put money in workers’ pockets—far more money than any minimum wage.

Hicks had a lot of material to work with to beat back the anti-union rhetoric that he didn’t use. But his press conference did mention what is apparently the foundation for collective bargaining supersession clauses that have been included in other minimum wage laws of Los Angeles, San Francisco, Oakland and Chicago, among others: The provision is actually intended to provide a safeguard for union workers against potential legal challenges to minimum wage laws.

Herb Wesson, Los Angeles’ City Council President, has admitted as much, with his spokesperson telling KPCC, a local NPR affiliate, that Wesson "continues to have questions about the policy as it relates to exposing the city to legal liability.” The concern, KPCC reported, is that “federal labor laws could be interpreted as preventing cities from interfering with contracts between employers and unions.”

James Elmendorf, deputy director of the Los Angeles Alliance for a New Economy, a progressive policy group affiliated with the city’s labor movement, told the Los Angeles Business Journal last year upon the passing of the hotel wage ordinance that “in a previous decision, the U.S. Supreme Court recommended that local and state laws and regulations of private businesses contain such exemptions.”

The provision actually ensures that collective bargaining will trump any local statutes. If any wage increase ordinance is challenged in court (as they frequently are by industry groups), local collective bargaining agreements that were formed while new “imposed” wage floors were in place would be protected from legal challenges through the supersession clause.

When combined with the fact that employees will earn higher wages and benefits when unionized, it easy to see why this provision makes business interests and their allies jump at the chance to turn the tide in a war of sound bites.

While the $15 minimum wage ordinance became official on June 13 without the “collective bargaining supersession clause,” the ordinance may be expanded by the time it takes effect next July. The expansion could include the supersession clause, as well as two other provisions that the union fought for during the legislative process: 12 days of paid sick leave and banning restaurants from keeping bogus “service charges” rather than considering them workers’ tips.

The boost in the minimum wage will undoubtedly help improve the quality of life and economic situation for masses of non-union workers in the city. But rather than undermining those gains, Hicks’s provision would have helped protect against potentially damaging legal challenges to the real benefits and increased wages that come with unionization.

For now, one can only hope that LA’s labor leaders will speak out for the provision and get organized labor past an embarrassing and largely untrue spate of headlines to convince low-wage workers that unions are not the villains Fox News and the Chamber of Commerce are attempting to portray them as.