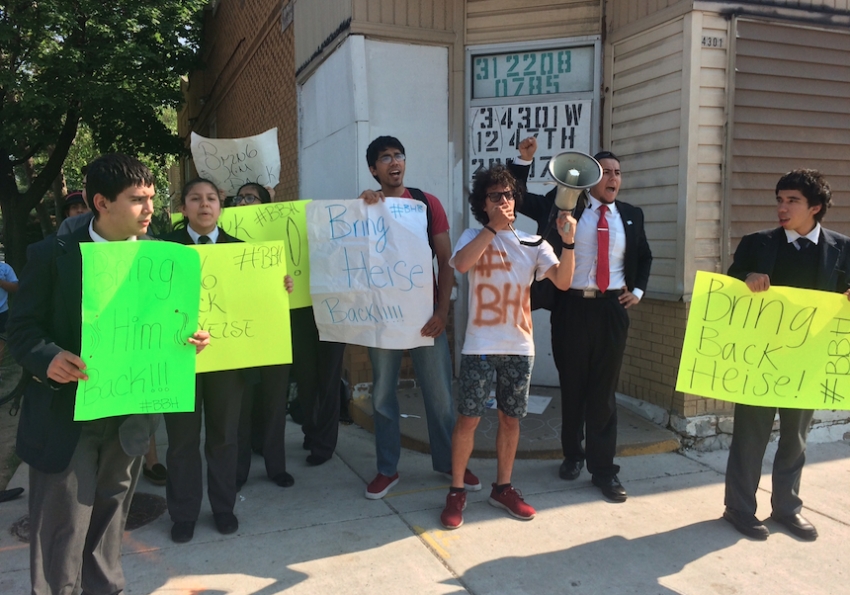 "Who do we want?! Heise! When do we want him?!" "Now!" students chanted on the afternoon of June 9 as commuters drove down 47th street in Chicago, occasionally honking their horns to show support and solidarity.

A young man in a suit and tie led the call-and-response chants, wielding a megaphone and firing up a small crowd of student protesters. That young man is Berto Aguayo, a graduate of Major Hector P. Garcia MD High School, an UNO Network charter school located in the Archer Heights neighborhood on the southwest side of Chicago. He's also a former student of English teacher Rob Heise, who was fired by the school on June 3.

Heise, an educator and activist who was active in the recently successful campaign to unionize his school—one of the most prominent charter chains in Chicago, which has recently come under heavy fire for accusations of corruption—was fired earlier this month for reasons the administration has declined to comment on. (The school did not respond to requests for an interview.) But according to students at Tuesday's protest, Alex Rock, the school's principal, told students that Mr. Heise was fired for failing to turn in students’ grades and assignments. Other students say they think Heise was fired for showing a Victoria's Secret commercial to a class during a discussion about how the media influences and distorts teens' body image and confidence. (Heise declined to comment on his case in light of upcoming legal challenges to his firing.)

Daniel Izguerra, who was in Heise's mentorship program before graduating last year, says he knows the real reason why Heise was fired. "They fired him for being an outspoken union activist."

Heise was fired on the same day that teachers at Urban Prep charter schools voted to join the Alliance of Charter Teachers and Staff (ACTS), a union that is part of the American Federation of Teachers (AFT). The firing also occurred just days before the Chicago Teachers Union (CTU), which represents some 27,000 teachers, administrators and paraprofessionals in the Chicago Public Schools system, rallied and marched in downtown Chicago, demanding a fair contract and a "just Chicago."

Word of Heise’s termination quickly spread among the student body, and on June 11, as fifth period lunch ended, dozens of students flooded the school’s third floor hallway to demand his reinstatement.

Jessica Ramirez, one of his former students who is now a junior at Garcia High School, explained that students "were on the third floor linking hands in the hall protesting." "We said we were not going to go into [class] until they brought him back," said Ramirez.

Protests continued the next Friday when some 30 students walked out during fifth period lunch. The students returned to school in time for sixth period but resumed their political activity once school let out. Dozens of current students joined alumni across the street on the southwest corner of 47th and Kildare to continue protesting. Over 50 students chanted in unison: "A good teacher belongs in the classroom! Bring back Heise!" Some even wore handmade spraypainted t-shirts with the hashtag #BBH—standing for “Bring Back Heise.”

By Monday, a Facebook page created by unidentified students called "Bring Mr. Heise Back" had garnered over 500 likes, and a second afterschool protest drew out over 50 current and former students once more who picketed and chanted demands for the administration to reinstate Heise at once.

The turnout for Tuesday's afterschool protest, however, was significantly smaller with only 18 students picketing, most of them alumni. According to the few current students present at Tuesday's protest, this is because Principal Rock called a mandatory afterschool meeting with all of the students who participated in Friday's fifth period walkout.

"Threatening students with suspension on the week before finals is making it hard to keep the momentum going," explains Aguayo of the low turnout for the fifth and latest afterschool protest that took place last week. He says the administration has successfully intimidated most students from participating in any type of protest, but adds that they will continue to strategize ways to keep pressuring the school to reinstate Heise.

This isn't the first time that Chicago has witnessed students standing up for unjustly fired teachers. Weeks before CTU's 10-day strike in 2012, students at Little Village's Social Justice "SoJo" High School staged a number of sit-ins, walk-outs and protests when two English teachers, Katie Hogan and Angela Sangha, were fired—allegedly because of their union activism. Three weeks of protests forced the administration to reinstate both teachers and all school programs that had been cancelled when Hogan and Sangha were fired.

Heise is scheduled to appear at a hearing with the National Labor Relations Board (NLRB) this Friday. While it's hard to say what will happen as the UNO high school wraps up the school year, last week's student protests ended on a sober yet determined note.