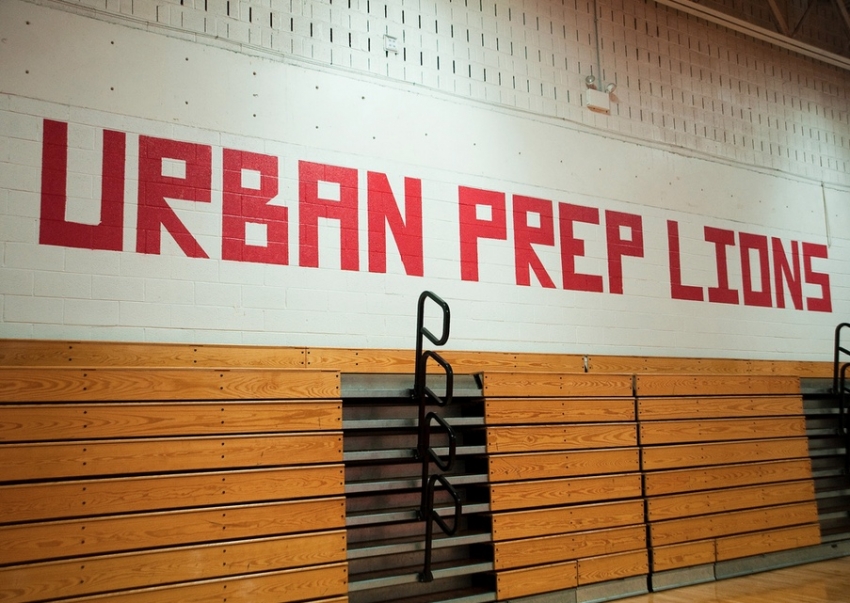 The battle over unionization at one of Chicago's most celebrated charters will be key to the future of organizing charter schools in the future.

On June 19, during their biannual semester-end interviews, 17 teachers were informed by school staff that they would not be returning to Chicago’s Urban Prep Academy come fall. The terminations came just weeks after 61 percent of Urban Prep’s teachers voted to form a union; activists say the firings were a blatant act of anti-union retaliation.

Last Thursday, around 100 teachers, students, parents and supporters attended Urban Prep’s board meeting to protest the firings and accuse the board of harming their community and hindering student progress. They also accused the board of resisting transparency and accountability, and creating a high teacher-turnover rate through firings and policies that push teachers out of the school.

This is only the latest case of such allegedly unjust firings, as more and more charter schools in Chicago and across the country are organizing to unionize despite the legal hurdles, backlash, and the common belief—at least among school management—that charter teachers don’t need unions.

Matthias Muschal told Catalyst Chicago he was fired after working as a lead English teacher at Urban Prep's Bronzeville campus for six years for “insubordination—specifically because he threw a pizza party for student-athletes and their families without notifying administration,” according to the administration. He says the real reason was his union activism—a huge disappointment because “I wouldn’t be able to teach my students anymore,” Muschal told In These Times.

Urban Prep CEO Evan Lewis wrote in a statement that "the suggestion that anyone was fired as a result of their organizing activity is both wrong and offensive. … “We respect and support the right of our teachers to choose a union as their exclusive representative. … Many of the teachers returning next year were active in the effort to organize, and we look forward to continuing our work with them."

At the board meeting, 26 people signed up to speak, although roughly half were allowed to address the board. Parents also delivered over 200 letters in support of the fired teachers in an effort to influence the board's decision. Not all board members, however, were present at Thursday's meeting—even though, according to Samuel Adams, a former Urban Prep English teacher, they all live in Chicago. Those who did not attend the meeting called in—a gesture seen by some union supporters as disrespectful.

Teachers, parents and students who attended the meeting praised Urban Prep’s mission and success, but said the recent firings go against the school's mission and will ultimately harm the students. Englewood Junior Lamar Strickland told the board he “would just like to ask that you guys bring back our teachers because ... they have all taught us something different that we can take in our life."

Students were especially upset about the firing of English teacher Natasha Robinson. Robert DuPont, a junior at the Englewood campus, said Ms. Robinson went above and beyond her responsibilities like calling students she knew were having trouble getting to school on time. Mr. Adams said that his former colleague had the highest freshmen test scores in the school and continued to teach even soon after her mother died.

Of the outpouring of student support over the past weeks, Robinson said, "It's nice to know I made an impact during my time at Urban Prep—to know that I was able to help these young men." (Urban Prep is an all-male school.)

At the meeting, James Thindwa of the American Federations of Teachers (who is also a member of the In These Times board of directors) also accused Urban Prep’s majority-black board of directors of harming the black community and instituting measures similar to anti-union, right-wing politicians like Wisconsin Gov. Scott Walker.

“I can't believe that this institution, this publicly funded institution, ... anchored in the black neighborhood, that is itself reeling from economic disinvestment that in part has been caused by the attack on labor unions ... is participating in a vile attack on a legitimate institution that serves as a legitimate counterweight to what we're seeing as unchecked corporate power in the United States.”

The audience highlighted the irony in these firings, as one of the main reasons teachers wanted to unionize was to change what they say are Urban Prep’s high teacher turnover rates. They say students don’t know if their favorite teachers will return the following year, which affects their learning environment.

“It's unfortunate that they would fire veteran teachers and that there will be so much uncertainty for these students going into the new school year,” said Robinson, who had taught at the school for seven years. Teachers say high turnover rates also mean devoting important time to train new teachers rather than to develop the skills of existing ones.

According to Brian Harris, a special education teacher at CICS Northtown Academy and Chicago Alliance of Charter Teachers and Staff (ACTS) president, “across the network, only nine teachers have been at Urban Prep more than five years. Now, only about half of them are returning.”

"Students are calling for a stable learning environment, and their teachers know that unionization is the only way to get stability for these students and their communities," says Rob Heise, an educator and activist who says he was fired from an UNO Network charter high School earlier this month for his involvement in helping unionize his school last year. Heise filed his own unfair labor practice complaint with the NLRB two weeks ago.

Chicago Teachers Union members made their way to the South Side school from their own union's contract negotiation meeting earlier that afternoon to show support for the fired Urban Prep teachers. Sarah Chambers, a special education teacher at Maria Saucedo Scholastic Academy, was among them. Chambers said that all the Urban Prep teachers who voted to unionize wanted was a voice for their students. Having played a major role in preparing her school for the historic 10-day CTU strike back in 2012, Chambers knows first hand the power of belonging to a union and added that teachers "know that if they don't have a union they don't have a voice."

"Urban Prep punished their staff for unionizing. They lied about what ACTS is and used teachers' professional development time to spread anti-union propaganda," said Brian Harris. "Their actions show a real disrespect for teachers and democracy and scream ‘we don't want to be accountable to anyone.’ ”

Chris Baehrend, Vice President of Chicago ACTS and English teacher at Latino Youth High School, said retaliation is the main reason why 39% of eligible voters chose not to join the Urban Prep union. "They're afraid. They're afraid of things like exactly what happened right here happening to them."

An unfair labor practice suit has been filed with the NLRB, and Chicago ACTS will be planning future demonstrations.

During the public comment period, Samuel Adams called on supporters to put pressure on Urban Prep by sending emails, and parent Shoneice Reynolds called for a local school council. Reynolds cited Urban Prep’s creed to make her point: "It states, we have a future for which we are accountable. I challenge you all to be accountable for our children's future."

Arielle Zionts is a freelancer writer and, beginning in August, a producer at the Interfaith Voices radio show in D.C. She studied anthropology at Pitzer College and radio at the Salt Institute for Documentary Studies. Crystal Stella Becerril is a Chicago-based Xicana activist, writer and photographer who regularly contributes to Socialist Worker, Red Wedge and Warscapes.