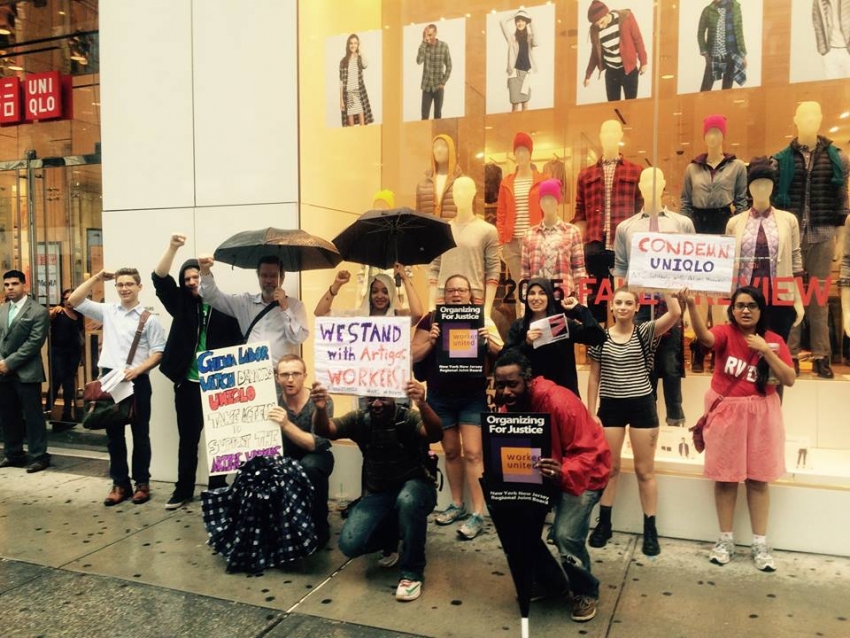 As protesters handed out flyers to pedestrians walking outside of a Manhattan Uniqlo store on July 15, the chant of “From China to the USA / Worker solidarity!” rang out on 34th Street. The action, organized by Workers United (WU), an affiliate of the Service Employees International Union (SEIU), was taken in solidarity with the workers at China’s Shenzhen Artigas Clothing and Leatherware factory, a major contract supplier for Uniqlo, the popular clothing retailer owned by Japan’s Fast Retailing Co.

Such acts of international solidarity are not an everyday occurrence within the American labor movement. But WU members were responding to what the Chinese workers say is a particularly egregious case of employer abuse.

In December 2014, workers at the factory went on strike, demanding that the company pay them legal social insurance, a central part of the Chinese social safety net which enrolls all employees into pension, medical insurance, work-related injury insurance, unemployment compensation and maternity leave. Many of the workers had been employed at the company for one to two decades, but discovered that Artigas had only been paying into China's version of social security since 2003, meaning that they would retire without their full benefits. After walking off the job, the workers were met by hundreds of riot and military police, and some were detained.

The workers posted a statement on Sina Weibo (China’s version of Twitter) explaining the situation, and say they were told that they would be released if they signed statements agreeing to stop the strike. The workers refused and issued another statement on Weibo: “The proper way to address labour disputes is through collective bargaining. But our employer has allied with the government to arrest workers at the presence of the lawyers of both sides. The employer’s move has completely ruined the trust of this negation and escalated the conflict, which is not conductive to social harmony!” The workers were forced back to the factory and their demands were not addressed.

On June 8, the workers went on strike again after managers began removing machinery from the factory without notice and fired a number of older employees in a plan to relocate the facility. About 500 of the factory’s 900 workers occupied the factory, preventing further machinery from being removed. Hundreds of the workers began a hunger strike on June 13, and workers released a statement in which they again demanded collective bargaining so they could negotiate with Artigas management on issues like pensions, overtime pay and contract revision. On June 25, at least one striking worker was detained by public security.

The Weibo account linked to the striking workers posted the message, “We are still struggling in the nightmare of our coworker being taken away by the police from his/her apartment in the night for no good reason. This afternoon, police have again entered our workshop, yelling at and threatening us workers. Is there no justice in Shenzhen? Are they trying to kill us?”

Management rejected the call for collective bargaining and said they would only agree to meet with workers individually, a common union-busting tactic used to diminish the power of strikers in China and elsewhere. The response prompted the workers to take their grievances to Guangdong Provincial Government in Guangzhou City at the beginning of July. Once again they explained their situation on Weibo: “While legally defending our rights over the past 25 days, we Artigas workers have been bullied and suppressed.” On July 6, the workers were forced to leave the government building by public security and put on a bus back to Shenzhen where they were detained by police upon arrival; on July 7, management cut off utilities at the factory.

Uniqlo’s labor issues aren’t limited to this facility. In January 2015, undercover researchers from Hong Kong’s Students and Scholars Against Corporate Misbehaviour (SACOM) discovered that workers at two Uniqlo suppliers in southern China were being overworked and underpaid in factories with poor ventilation, extreme temperatures and sewage-covered floors. In July 2014, a worker was killed after an electrical leak touched the sewage. The investigation also revealed that workers at Pacific Textiles and Luenthai Garment factories in Guangdong province (a Uniqlo supplier) were paid as little as one third of the average monthly salary of other workers in the area. According to one worker, a representative for Uniqlo visited their factory every week and nothing changed.

Fast Retailing, the company that owns Uniqlo, released a statement after the report claiming that working conditions would improve. “Fast Retailing has urged swift action against the factories on the issues identified in the SACOM report, and we will cooperate fully with them to ensure that improvements are made,” said Fast Retailing’s executive officer Yukihiro Nitta. “Together with third parties, including auditors and NGOs, we will check progress within one month.”

Fast Retailing has released several statements insisting that they are concerned about these issues—yet worker unrest has continued.

None of that unrest has slowed the growth of Uniqlo’s brand, however. The company plans to open 100 new stores in China every year over the next decade. Uniqlo’s ability to supply consumers with cheap, stylish clothes positions it at the forefront of “Fast Fashion,” the clothing trend that has completely changed the apparel retail industry. As a recent piece in Forbes describes it: “There are two keys to the success of Fast Fashion: one is clearly price. The other is a continuous supply of fresh, cute clothes.”

So how can activists, like the ones who showed up in front of the Uniqlo’s store in Manhattan, get consumers to connect the fashions they’re wearing to the people who make the clothes? Kevin Slaten, Program Coordinator at China Labor Watch, was on hand at the NYC action and told me that things have actually been getting easier on that front.

“It’s undeniable, if you look at people who are doing research like we are, a lot of this information is now coming from social media,” said Slaten, “Every day workers are posting their struggles, and this particular struggle has been easier for many people to follow. People are now able to read the workers’ own words and connect them to the supply chain.”

“The brands have enormous power to communicate their ideas because they have a lot of money,” Workers United Campaign Researcher Michelle Flores told me. “On the other hand, I think the most powerful thing is to listen to the workers. Having a network of people throughout the world who are willing to put workers’ voices first is what’s going to make a difference.”

Workers United believes that global comradeship is a crucial part of this fight. Julie Kelly, General Manager of the New York New Jersey Regional Joint Board and Vice President of Workers United, told me that her organization stands in complete solidarity with the workers.

This kind of fellowship is tremendously important going forward. While many in the West either view Chinese workers as conspiring competitors or faceless victims, the reality is much different. Eli Friedman, author of Insurgency Trap: Labor Politics in Postsocialist China, writes that “China is undeniably the epicenter of global labor unrest. While there are no official statistics, it is certain that thousands, if not tens of thousands, of strikes take place each year. All of them are wildcat strikes—there is no such thing as a legal strike in China. So on a typical day anywhere from half a dozen to several dozen strikes are likely taking place.”

Friedman also points out that workers are actually winning, as many have obtained better conditions and higher wages through their strikes. These seldom-discussed victories could potentially multiply if more pressure is successfully applied to brands operating in China like Uniqlo.