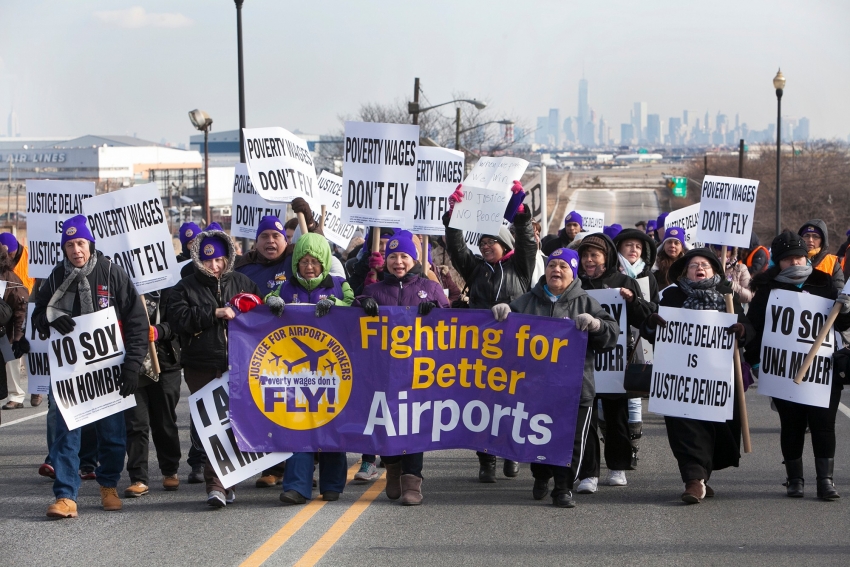 The success in New York is a victory for a nationwide movement to organize subcontracted airport employees. (SEIU 32BJ)

Twelve hundred workers at New York’s John F. Kennedy and LaGuardia airports may soon be negotiating a union contract after pressuring management with the threat of a strike. On July 22, Local 32BJ of the Service Employees International Union (SEIU) announced that the workers’ employer, Aviation Safeguards, has agreed to remain neutral as they seek to join the SEIU through a “card check” recognition process.

The day before the agreement, employees had vowed to walk off the job and potentially strike. The subcontracted baggage handlers, security guards and wheelchair attendants have been fighting for higher wages and better working conditions for years. In February, a number of Aviation Safeguards baggage handlers went on strike at JFK, despite a threat of termination. Rahim Akhbarally, who has worked for 21 years at the company, told CNN, “We fight, we win. If we don't fight, we're not going to win.”

“The agreement with Aviation Safeguards last week shows the power that airport workers have when they come together and fight for good jobs,” 32BJ President Hector Figueroa told In These Times. “This agreement brings the number of subcontracted airport workers who have won, or are on a path to win, 32BJ recognition to almost 7,000 in the New York City area—a majority of subcontracted workers at the airports. … The fight isn’t over, but this victory shows worker solidarity is still a force for change in this country. Airport workers across the country are fighting for better wages and we have seen them win significant wage increases, including a raise up to $12 an hour in Philadelphia and soon an increase to $11 an hour in Boston. And the fight continues for good jobs and respect for all workers at airports across the US.”

Figueroa is referring to a massive nationwide campaign to organize subcontracted airport employees, who have won a number of workplace victories against what they often allege are horrible working conditions. In addition to the examples of Philadelphia and Boston that Figueroa mentioned, airport workers in cities like Minneapolis and Los Angeles have seen wins.

In a June In These Times story about Logan Airport workers striking in Boston, Eugenio H. Villasante, Regional Communications Manager for New England’s 32BJ SEIU, also pointed out that the struggle is a nationwide one.

“This is very much same fight throughout the country,” he said. “These are workers helping people getting people from point A to point B. … Our country depends on them.”

According to the union, negotiations for a union contract are expected to begin this fall (assuming a majority of workers choose to join the union). Workers will be seeking a wage of at least $15 an hour and affordable health care.