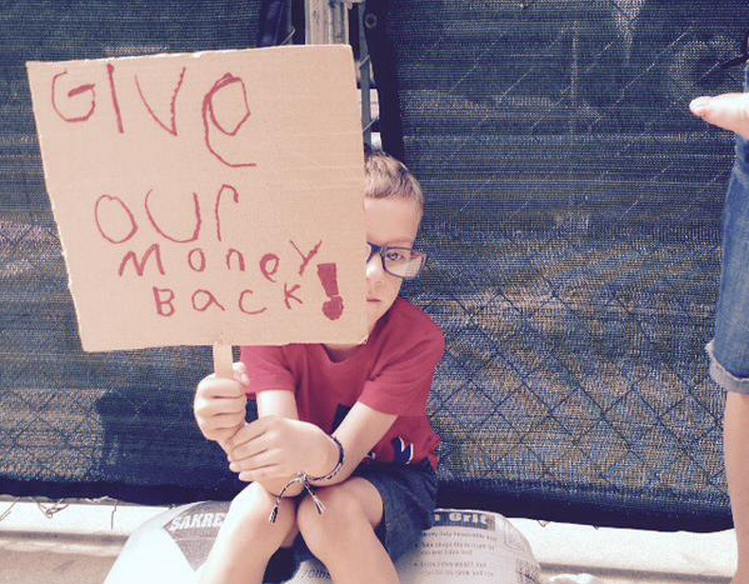 "We need teachers! We need books! We need the money that the banks took!" chanted a group of protesters outside of Chicago Public Schools (CPS) headquarters July 22. The crowd was protesting the Board of Education's recent decision to slash funding to Chicago schools by $200 million while paying massive amounts of debt to banks like Bank of America. This latest round of cuts includes cutting 1,400 positions—200 of which serve special needs students in the city.

In less than an hour, the crowd of about 200 people—most of them members of the Chicago Teachers Union (CTU)—had grown to over 500. Among them were teachers, parents and members of community organizations like Communities United, Brighton Park Neighborhood Council (BPNC), the parent group Bad Ass Moms (BAMs) and Fight for $15, all of whom rejected the cuts and accused the Board of Ed of being "broke on purpose."

"CPS is telling Chicago students and teachers that there is no money, but we see funding being shifted to charter schools and banks," said Rousemary Vega, a CPS parent, education justice activist and founding member of Bad Ass Moms. "CPS just spent 10 million dollars on new furniture! How can you say you don't have money for our schools but you have 10 million for new furniture? Now that’s being 'broke on purpose'!"

Community and parent groups were also there to protest what they say is an expansion of charter schools in the city that comes at the expense of public schools. The BPNC and students and teachers from Kennedy High School were there to protest plans for two new Nobel Charter School campuses to be built blocks from Kelly High School, which has lost an estimated $6 million over the last five years and had cuts to their acclaimed band program, now almost exclusively funded through private donations. Parents say they don't understand how the Board of Education can continuously find money to open new charter schools, but can't properly fund existing public schools.

Across the street, a charter school counter-protest held a press conference. With around 40 supporters in attendance, those gathered said they wanted choices for their students beyond public schools.

Chris Baehrend, the Vice President of the Chicago Alliance of Charter Teachers and Staff (ChiACTS), which represents teachers and staff in over 150 charter schools across Chicago, disagrees. "ChiACTS and CTU, we both want the same thing: We want all students to get a great education. We want all teachers to have a voice."

Baehrend, who is an English teacher at Latino Youth Charter High School, joined the CTU picket in solidarity with public school educators and students. "Even though I teach at a charter school, it's not in my interest for charters to proliferate,” he says. “I'm critical of the charter school model because [public] schools are not the problem—it's this model of privatization that is." The movement to unionize charter schools in Chicago and across the country has grown in recent years.

CTU Vice President Jesse Sharkey, who was seen rolling up to the protest on a bicycle through the city’s Divvy rideshare program while wearing a suit and tie, told reporters, "If there's no new revenue, our schools are going to go bankrupt. It's not a sustainable model." He added that CPS has already made $2 million worth of cuts in the last month—cuts which he says will decimate conditions for students. "We're talking about eliminating elementary school sports. We're talking about taking the aides who help special education students get on the bus and eliminating them. These are going to be devestating cuts."

As City Hall begins to roll out a new wave of austerity, progressive forces like the CTU are arguing that this is not a “budget crisis” in which Chicago is responsible for too many social services and public sector jobs, as the City claims it is, but rather a revenue crisis which the State has created. Sharkey added that "there has to be more revenue; the people who have the most wealth in our society have to pay more. If they don't do that, we're going to cannibalize and ultimately shut down public schools."

CPS has been trying (and failing) to smooth out its image as acting on behalf of the City's corporate elite for years, but teachers, parents and education justice activists say the aren't buying it.

"We know they're mismanaging money," says Tammie Vinson, who is a special education kindergarden teacher at Oscar DePriest Elementary and a former aldermanic candidate for the 28th ward. "Public schools are a right and we have to keep protesting and agitating to let those benefiting from our losses know that they can't keep ignoring our inequities."

In light of the latest round of budget cuts and layoffs, CTU has called for a series of protests and actions over the last two weeks in an effort to raise awareness of what they say are Mayor Emanuel and his appointed Board of Ed's plans to create crises in order to push privatization.

"The governor is imposing a crisis on this state and the pressure, the stress is going to break the chain at its weakest link. And the weakest link is the public schools in Chicago," said Sharkey. "What you're seeing now is an outpouring of frustration among our front-end educators in this city, who are saying, ‘There has to be a political solution. There has to be revenue.' Expect more protests. Don't expect us to be quiet. We're going to demand that the politicians of this state do the right thing."