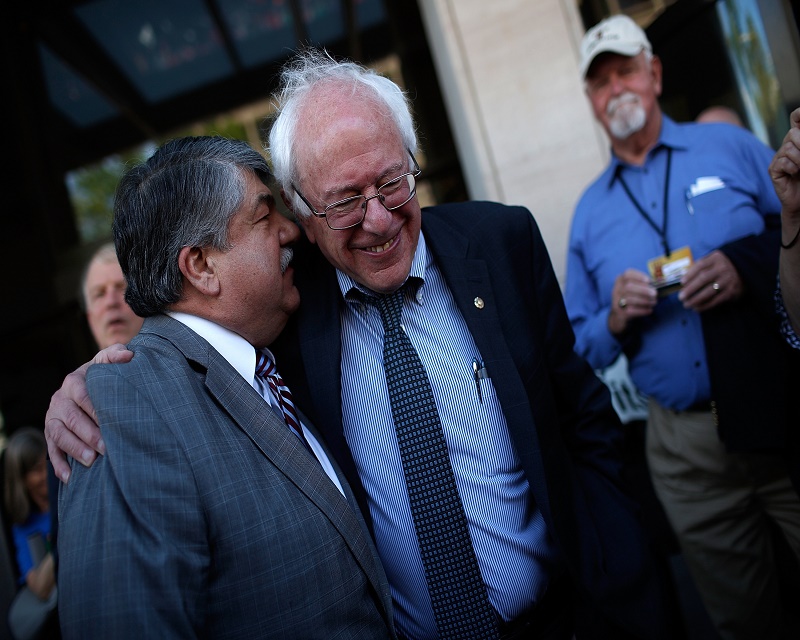 Sen. Bernie Sanders of Vermont has emerged as the most outspoken pro-labor candidate in the 2016 Democratic primary. With his introduction of federal $15 minimum wage legislation and his frequent targeting of Walmart’s Walton family in his stump speech, Sanders has his finger on the pulse of the some of the most vibrant and large-scale economic-justice movements in decades. That stands in stark contrast to the front runner, Hillary Clinton, who’s been mum on $15 and is a former Walmart board member.

As Bloomberg labor reporter Josh Eidelson recently reported, there also exists a widespread “dissatisfaction or distrust” toward Clinton among AFL-CIO local and state leaders in the key early-primary state of Iowa over her promotion of the unpopular Trans-Pacific Partnership. The trade agreement is largely deemed by labor to be corporate-driven and has been likened to 1994’s North American Free Trade Agreement for its potential to drive down wages and decimate jobs. Clinton has recently begun condemning the deal, but some doubt her new stance. Sanders, on the other hand, has consistently opposed the TPP, describing it and similar trade policies as a “disaster” for the American worker.

His muscular rhetoric on the issue, among others, explains the grassroots support among rank-and-file union members that has manifested as Labor for Bernie, a political network of workers pushing their unions to endorse Sanders. A public letter released by the organization urging unions to endorse Sanders has attracted the signatures of over 5,000 union members around the country.

While the AFL-CIO rarely makes an endorsement during the primary season, endorsements from its 56 national affiliates and other major unions are expected to trickle in between now and the 2016 primaries. The endorsement process in most unions, however, is far from democratic, as union officials rather than rank-and-file members are the ones who hold most influence over such questions. In such an environment, and against the gleam of Clinton’s name recognition and significant lead, the question for Sanders’ union backers seems to be how much bottom-up agitation can win unions to the Vermont Senator’s side.

‘A crisis of union democracy’

The 45-member executive council of the American Federation of Teachers (AFT) endorsed Hillary Clinton on July 11, becoming the first national union to make an endorsement in the Democratic primary. The move comes considerably early compared to the AFT’s process in past elections. The union waited until October 2007 before endorsing Clinton for the 2008 race and held out until February of election year 2004 before endorsing John Kerry.

In an op-ed criticizing the decision, education professor Lois Weiner called the endorsement “a rushed decision [that] was made without any semblance of legitimacy,” noting that the union used a single, early-June poll of 1,200 members—when Sanders was just seeing his first surge in the polls—to tout the Clinton endorsement as representing the union’s 1.6 million members.

“If you want to shape something, you get in before the primaries,” AFT President Randi Weingarten said in defense of the endorsement. Weingarten, a longtime Clinton ally, is currently sitting on the board of pro-Clinton Super PAC Priorities USA Action.

Beth Dimino, an 8th-grade science teacher in Long Island and president of the Port Jefferson Station Teachers Association, an AFT affiliate, describes the process as a “stifled debate.” “[AFT] made a decision to commit to this endorsement 15 months before it was necessary to do so, without, I believe, consulting rank-and-file.”

Megan Moskop, a middle school teacher in New York City and member of the social justice-minded Movement of Rank-and-File Educators (MORE), paints the situation as “a crisis of union democracy,” connecting the AFT’s “deal-making” endorsement to the dearth of progressive policy under such a system.

“It’s about candidates like Bernie Sanders, candidates that actually have pro-labor positions and pro-working class positions, and positions that would support my students and their families in the way that they need support and don’t get it,” Moskop says. “If unions worked differently, then candidates like that would be more likely to have a place at the table. Whereas when unions buy into the same political process that doesn’t allow for candidates with little money and little name recognition, [unions] increase what's already broken” in the political process.

David Moberg reported in 2012 that organized labor’s support was a crucial in driving the turnout to re-elect President Barack Obama.

But could the AFL-CIO’s state and local level federations provide a similar, if smaller, effort during the presidential primary? Not if AFL-CIO President Richard Trumka has anything to say about it.

After AFL-CIO divisions in South Carolina and Vermont endorsed Sanders in June, Trumka sent out a memo of rebuke reminding state and local leaders in the labor federation that such explicit endorsements were banned. “There’s only one endorsement in a presidential election, and it comes from the national,” Trumka later told Politico.

Ian Robinson, a Labor for Bernie member and president of the AFL-CIO Huron Valley Central Labor Council, says the AFL-CIO national endorsement, like the AFT’s, should not be based on the “pretense of unity.” Labor should “decentralize endorsement decisions down to the level where [an] organization, whether it is a federal body like the AFL-CIO or a union like AFT, is able to achieve a broad consensus on who to endorse.”

When consensus isn’t there, Robinson says, “The claim to speak on behalf of the entire national union is revealed for what it is—overreach. … What benefits can an endorsed candidate deliver that are worth dividing and alienating important sections of your organization's base?”

Sanders’ progressive and pro-union credentials certainly provide ample fodder for energized rank-and-file support. Will they energize union leaders, too? His years of support for postal service expansion in the face of cuts brought glowing praise from American Postal Workers Union (APWU) President Mark Dimondstein after a meet-and-greet with the candidate in mid-July.

“There has been tremendous interest and excitement about [the Sanders] campaign in the labor movement,” Dimondstein says.

The second major union to endorse thus far, the 185,000-member National Nurses United, chose to endorse Sanders on Monday. NNU executive director RoseAnn DeMoro alleges that the decision was made after union polls featured significant amount of member engagement, though the ultimate decision for the endorsement seemed to come from the union’s top leadership. The union’s social movement roots, however, are clearly in line with Sanders’ stances on priority issues like single-payer health care.

Eric Robertson, a Sanders supporter and the political director of Atlanta’s Teamsters local, believes that endorsements are overemphasized. As Sanders’ grassroots supporters tout the candidate’s pro-worker policies, other union workers will get active for Sanders, Robertson says, resulting in a campaign that relies more on a politicized public than on union endorsements.

“I think that there’s a tendency among Bernie’s labor supporters ... to be overly alarmed at labor not jumping on the Bernie bandwagon,” says Robertson. “I think it's really important that people just continue to do the work ... and really demonstrate the breadth of support that Bernie has. The bigger the grassroots support, the more you’ll have official support come out.”

One hundred thousand people reportedly participated in more than 3,500 grassroots meetings throughout the country on July 29 to try to figure out how to build and expand the “political revolution” that Sanders consistently describes as being necessary for victory.

“That’s what we need—bottom up, millions of Americans not just voting, but organizing groups in their neighborhoods like we’re going to see tonight,” former Communication Workers of America President Larry Cohen told In These Times on the day of the event.

He shares Robertson’s view: “What we want is to build a political revolution in America and that means grassroots across the country, not just in key primary states. … That’s what is key—it’s activism, not top-down endorsements.”

The organized people power and fundraising capabilities that organized labor can provide could make a crucial difference in favor of a strongly progressive candidate like Sanders in a campaign already engulfed by money everywhere else. But given labor's tendency to support centrist Democrats like Clinton whom they believe will have a better chance of winning elections (despite offering very little tangible reassurance that those centrists will ease the downward slope of union density over the past 30 years), Sanders' pro-worker stances may not be enough to win the endorsements of a majority of American unions or the AFL-CIO. But that won’t necessarily slow the “political revolution” he’s trying to foment .