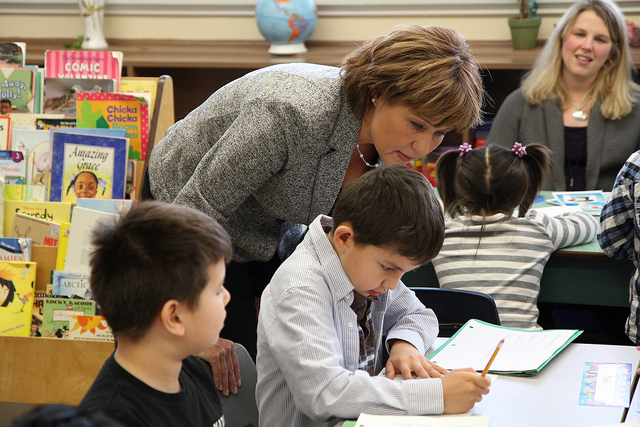 The solutions to the shortage—insofar as it even exists—are easy, but they aren't what corporate reformers want to hear. (Province of British Columbia / Flickr)

Like much else in the national education debate, panics about teacher shortages seem to be a perennial event.  In a widely discussed article for the New York Times earlier this month, Motoko Rich called attention to sharp drops in enrollment in teacher training programs in California and documented that many districts are relaxing licensure requirements as a result, pushing more and more people into the classroom without full certification or proper training.

“It’s a sad, alarming state of affairs, and it proves that for all our lip service about improving the education of America’s children, we’ve failed to make teaching the draw that it should be, the honor that it must be,” mused Times columnist Frank Bruni.

That Bruni would bemoan such a state of affairs is ironic, as he has used his column over the years to repeatedly argue that teaching is too easy a profession to enter and too easy to keep, and amplified the voice of reformers who want to want to make the profession more precarious. But the reality is that speaking of a “shortage” at all is a kind of ideological dodge; the word calls to mind some accident of nature or the market, when what is actually happening is the logical (if not necessarily intended) result of education reform policies.

“This is an old narrative, the idea that we aren’t producing enough teachers,” says Richard Ingersoll, an educational sociologist at University of Pennsylvania who has written extensively on the subject of teacher shortages. “As soon as you disaggregate the data, you find out claims of shortage are always overgeneralized and exaggerated. It’s always been a minority of schools, and the real factor is turnover in hard to staff schools. It may be true enrollment went down in these programs nationally, but there are so many former teachers in the reserve pool.” In other words, the problem isn’t that too few people entering the profession, but rather that too many are leaving it.

Such high turnover rates are disruptive to school culture and tend to concentrate the least experienced teachers in the poorest school districts. A 2014 paper by Ingersoll and his colleagues shows “45 percent of public school teacher turnover took place in just one quarter of the population of public schools. The data show that high-poverty, high-minority, urban and rural public schools have among the highest rates of turnover.”

“If you look at the shortage areas in terms of subject or what districts are having trouble filling jobs, it’s a shortage of people who are willing to teach for the salary and in the working conditions in certain school districts,” says Lois Weiner, an education professor at New Jersey City University and author of The Future of Our Schools. “It’s not a shortage in every district.  Look at the whitest, wealthiest districts in every state and call up the personnel department, ask if they have a shortage in special ed or bilingual ed. They don’t—in fact, they are turning candidates away.”

Ingersoll says it’s no secret what kind of policies will keep teachers in the classroom.

“The most important thing in retaining teachers, according to the data, is sufficient leeway and autonomy in the classroom,” he says. “If low-performing schools that are sanctioned actually allow teachers more autonomy discretion and leeway, their turnover is no higher than high-performing schools.”

A recent survey by the American Federation of Teachers and the Badass Teachers Association cited by Bruni sheds some light on the state of teacher autonomy and job satisfaction. Only 15% of teachers in the survey strongly agreed with the statement “I am enthusiastic about my profession at this point in my career,” although 89% strongly agreed with such feelings at the start of their career. Seventy-three percent said they were “often stressed,” citing mandated curriculum, large class sizes and standardized testing” as their top everyday stressors in the classroom; 71% said adoption of new initiatives without proper training or professional development were major sources of workplace stress. Among the 30% of teachers who claimed to have felt bullied in the last year, 58% of these identify an administrator or supervisor as the culprit.

Far from granting more autonomy to teachers, we appear to be giving them less.

And such working conditions are taking a toll. Last year, a report from New York’s United Federation of Teachers documented a “teacher exodus” from the city’s schools, with nearly half of teachers leaving within the first six years of their career, either to higher-paying suburban districts or to other careers altogether. A new trend in the New York City, according to the UFT, is a sharp increase in resignations among mid-career teachers—those between six and 15 years of service. These teachers are resigning at three times the rate of 2008.

One of corporate school reform’s many ironies is that its ideological justifications often yield their opposite. In the name of “raising standards” and holding educators accountable, teachers lose their professional autonomy and face an ever-increasing stream of new mandates. This leads to higher turnover. In order to fill the gaps, licensure rules are relaxed and “supports” are provided for an increasingly amateur workforce—through prefabricated curriculum and assessments. And the cycle starts all over again. The demoralization of the American teacher is leading to the deskilling of their profession, which leads to teacher resignations, which leads to more demoralization, ad infinitum.

Kevin Prosen is a teacher in New York City and chapter leader in the United Federation of Teachers.