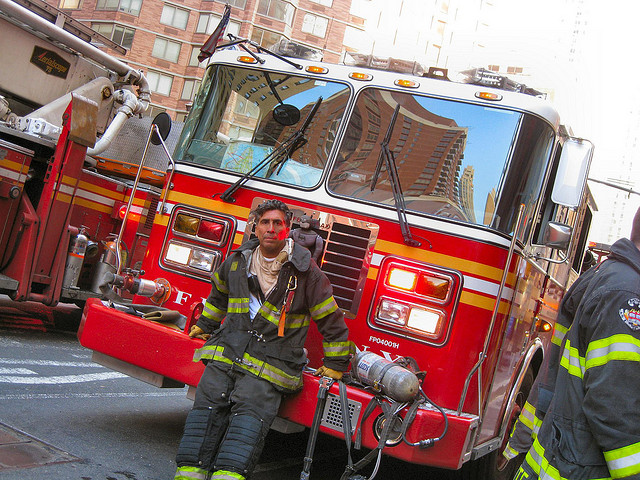 In a city that is nearly two-thirds people of color, only 14 percent of New York City firefighters aren't white. (Flickr / PittCaleb)

While much of New York City’s political class was on vacation in the last week of August, the head of the city’s main firefighters union, Steve Cassidy, blasted a modest program meant to advance minorities to the head of the department’s hiring line.

Invoking the doctrine of fairness, Cassidy told the New York Daily News, “It’s obvious this decision is being done on a political basis, who is going to pick these 100 cadets who will almost certainly be guaranteed a firefighter job? Who picks them, who decides?" adding, “This is making things worse, not better, and it’s undermining civil service.”

Last March, it seemed that New York’s new mayor, Bill de Blasio, was on course to bring the Fire Department of New York (FDNY), where people of color are vastly underrepresented on the force (only 14 percent of the department’s 11,000 firefighters were people of color in 2014, according to the Daily News), in line with other more diverse fire departments  around the country—and the city’s own demographics (according to census data, only 33.1 percent of the city was non-Hispanic white in 2011). The city settled a lawsuit with the Vulcan Society, an organization of black firefighters that has fought since the 1940s to integrate the department, that granted $98 million in back pay and benefits to black and Latino candidates who believe they were subjected to discriminatory entrance exams in 1999 and 2002.

The administration also agreed to further measures to diversify the ranks, including hiring a chief diversity officer giving Fire Academy graduates who have city residency priority in appointments to fire companies. The Vulcans have long argued that part of the reason the department has stayed monochrome is because whites come into the department from the suburbs.

All the efforts by groups like the Vulcans to have more non-whites and women have aroused resistance among some in the ranks, but even the anti-affirmative actionists have taken hit. This summer, the leader of the anti-diversification group Merit Matters, Deputy Chief Paul Mannix, chose to disband the group after he was docked 50 days’ pay for leaking department documents to the press in an attempt to show that non-white firefighters were ill-qualified. The department also forced him to reject $35,000 raised by his sympathizers to make up for his pay loss.

The Chief-Leader, the government workforce weekly newspaper in New York, said in an editorial, “The fact that such leaks were not proffered—or at least not published in the Post —about white male candidates who were having trouble measuring up undermined the claim that Merit Matters’ sole concern was upholding FDNY standards.”

But for John Coombs, a former president of the Vulcan Society, these advances are cosmetic, and Cassidy’s last offensive against change is proof that there’s a long way to go. “To be brutally honest, they’re back to business as usual,” he said of what he characterizes as the department’s unwillingness to listen to advocacy groups like the Vulcans. “They’re just doing it with a smile now.”

For starters, he believed that the FDNY’s newly appointed  diversity officer wasn’t listening to concerns from the Vulcans for groups representing Latinos, Asians and females that while the entrance exams are fairer than in the past—the Vulcans had said in the past that the written exams were biased toward people with families already in the department, which made keeping minorities out of the department a self-fulfilling prophecy—the Fire Academy’s recruitment tactics are still failing people of color and women. One department source noted that in the academy, after cadets have passed physical and written examinations, whites fail out of the medical exam at a rate of 12 percent, while blacks fail out at a rate of 30 percent.

“The numbers are improving, but my bottom line is that it’s not enough to say we let in 10 women, but you’re going to fail three,” Coombs says.

Sarinya Srisakul, president of the United Women Firefighters, says the de Blasio administration has been more receptive to her group, and has consulted with the US Army to remake the Fire Academy to being both non-discriminatory. "It's not perfect, but it's on the way," she said. She also hailed the end of Merit Matters, but she noted that the gender gap is still large, noting that 2,000 women took the last exam, 19 were hired and four were in the academy. "We have a long way to go," Srisakul says.

For her, the biggest problem is changing the firehouse culture. The more progress made in racial and gender diversity, the more white, male firefighters will denounce the changes and say that increased diversity is only the result of lowering standards. "It's a good old boys club," she says. "The purist form of racism and sexism is the idea that any any person that doesn't look like me who achieves what I achieve is taking something away from me."

Cassidy’s harsh words came as no surprise to Coombs. In his estimation, Cassidy’s union, the Uniformed Firefighters Association (Local 94 of the International Association of Firefighters), “has always been against [diversity] in some form or another. …  They were against women coming into the department. They’re against everything. It’s their mantra.”

In the past, Cassidy has called for the department to hire more recruits out of the military as well as high school athletic departments, on the idea that it would lead to a more diversified hiring pool without undercutting quality. But the union’s opposition to the recent lawsuit as well as efforts to give priority to New York City residents in the hiring process has put the union at odds with many progressive city politicians who have stood with the Vulcans in past fights like the push for funding for health treatment for 9/11 responders. The diversity issue has put the firefighters union in the same conservative corner that the police unions often find themselves. (The UFA also endorsed President George W. Bush in 2004.)

“Historically, the union has been about maintaining the status quo,” says Ginger Adams Otis, the author of Firefight: The Century-Long Battle to Integrate New York's Bravest. She says the union has long justified its positions on the grounds of meritocracy. “Their position is, you take the test and if you score high enough, you get hired.”

The tension between the Vulcans and the UFA isn’t new, Otis says, but there is one level of agreement. The Vulcans and other rank-and-file advocacy groups have been able to be so outspoken on all issues—whether within the union or beyond it—because the union is strong enough to protect them from management retaliation.

“They’ve been able to be vocal advocates and real gadflies,” she said. “It’s given them tremendous protections.”