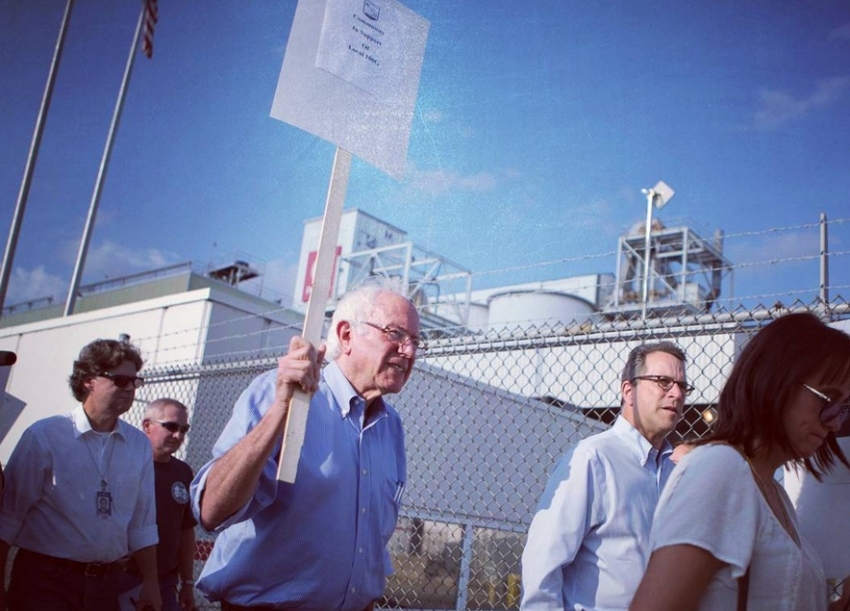 Senator Bernie Sanders hosted a national phone call Wednesday night focused on the labor movement in which organizers say 26,000 people participated. The campaign hopes to drum up support from union members as Sanders inches his way to front-runner status in the early Presidential primary and caucus elections of New Hampshire and Iowa.

Organized by Labor for Bernie, the network for union members aiming to secure endorsements for Sanders, the call featured remarks by Sanders outlining his economic platform.

“How does it happen that we continue to be in a situation where millions of American worker want to join unions, want to be involved in collective bargaining, they want to stand up for their rights, but they can’t join the union because their employers use unfair, illegal tactics to deny them their constitutional rights to form a union?” Sanders asked before announcing that he will be introducing the Workplace Democracy Act into legislation this fall in order to significantly ease up union drive efforts and subsequent first contract implementation.

“This exists in other countries, and we all know that one of the reasons that the American middle class is disappearing is because we have seen a significant reduction in the number of people who are in trade unions in this country.”

Some activist rank-and-file union members throughout the country have labeled Sanders as the only viable candidate for workers and, with Labor for Bernie, are attempting to upset an endorsement process that has thus far—in the American Federation of Teachers and the International Association of Machinists and Aerospace Workers—favored his opponent Hillary Clinton early on.

“We need someone who won’t give us any more false promises. We need a warrior in the White House. Bernie Sanders is that warrior,” says Roseanne DeMoro, president of the progressive National Nurses Union, who spoke about her union’s endorsement for Sanders, making them the first major union to endorse the candidate thus far. “The National Nurses Union so proudly endorsed Bernie the first minute that we could. We know and we trust who Bernie is.”

SEIU members involved with Bernie Sanders fear that their union will be labor’s next major player to endorse Clinton without much input from the rank and file, with a decision expected for late September. SEIU for Bernie, a Labor for Bernie affiliated group, has collected hundreds of signatures in a petition to push SEIU leaders to stave off any endorsement, but the union has recently told Politico that internal polls shore up Clinton as the members’ preference.

At IBEW, a different kind of endorsement process is being undertaken, and as Carl Shaffer of IBEW Local 153 puts it, Sanders supporters within the union are making their voice heard, telling call participants of their mass email to IBEW’s political department, a concerted effort hoping to delaying any decision until after primary season has actually unfolded.

“So many IBEW members took the opportunity to express their views to the international president that he responded a little over a week later to all of them on August 28, saying that IBEW had no intention of making an early endorsement. He finished his statement by encouraging all IBEW members to become involved in the grassroots political efforts and to study the candidates’ positions on the issues,” Shaffer says.

Another participant in the call was Adolph Reed, a University of Pennsylvania political science professor and longtime writer and activist, with an organizing report from the South where he says he has been drawing interest for Sanders’ campaign from students and faculty at the University of New Orleans, Tulane University, and historically black colleges and universities throughout the region. Reed also stated that he is considering forming a group called National Academics for Sanders.

Sanders’ call to union members Wednesday night enabled Labor for Bernie to bring in thousands of volunteers, according one of the group’s representatives Larry Cohen, the former president of Communication Workers of America.

As Sanders made clear during his remarks, these volunteers should be crucial to his campaign: “No president can bring about the changes we need in the politics and economics of this country—no president can do it alone. We need a political revolution, we need millions of people to be involved in the process and the trade union movement has got to be in the middle of that.”