Scott Walker Is Down in the Polls. His Strategy To Climb Back Up: More Union-Busting. 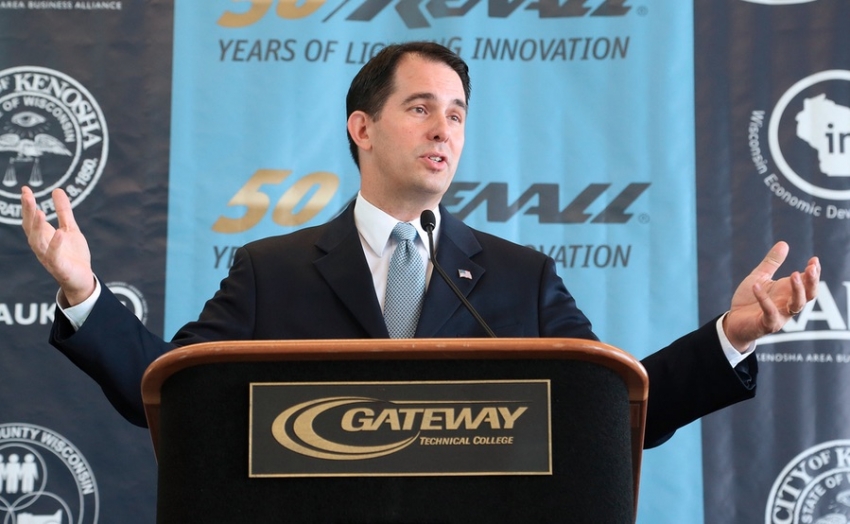 Walker's recent speeches are a kind of rhetorical jiu-jitsu, exploiting working class resentment against “bosses” but steering it away from the wealthy. (Gateway Technical College / Flickr)

Guess which Presidential candidate wants to be the champion of the working class?

But Republican Gov. Scott Walker of Wisconsin says that you are wrong: the right answer is, of course, that he has won the title through his successful, aggressive campaign to weaken and even eliminate public worker unions in his state by passing a statewide right-to-work law (which hurts private sector union workers, as well), restricting bargaining rights of public sector unions and making it easier to get rid of—and harder to organize—unions, especially “big government unions.”

Having plummeted in the presidential primary polls, Walker needs to figure out a way to stand out in the pack, and he has apparently decided that running hard against labor unions and their “bosses” can endear him to many blue-collar voters as well as such billionaire backers as the Koch brothers.

Recently—especially in a Las Vegas speech on Monday—Walker has returned to his right-wing glory days of the winter of 2011-2012, when he led his Republican legislative majority to curb public employee unions despite massive protests.

On Monday, he unveiled a new plan for his presidency that, he says, “will eliminate the big government unions entirely and put the American people back in charge of their government.” If elected, he promised, “On Day One, I will repeal all of President Obama’s regulations that have reduced employee freedom”—that is, freedom from the right to have a union—“and that have made it harder to create jobs” (though his intention is to get rid of many public sector jobs without offering any evidence that will stimulate private sector job growth).

But he clearly doesn’t believe that those hard-working people have any rights on the job (except to reject unions), especially when they work for the government.  “Collective bargaining is not a right, it is an expensive entitlement,” he says, linking collective bargaining to anti-welfare sentiments by calling it an “entitlement,” one of the vilest epithets in the right-wing lexicon.

Walker extols the freedom of every worker—“every state or local worker and every private sector worker has the freedom to choose whether they want to be in a labor union or not.”  But he proposes wiping out all public sector unions and supports Republican legislation—the Employee Rights Act—that would make it much more difficult for workers to choose freely to be in a labor union.

Walker’s renewed anti-labor gambit goes against the political grain, since polling shows a rise in public approval of unions, and even among blue-collar conservatives whom Walker clearly hopes to win over, it is not likely that large numbers see unions as as much of a burden as Walker and his billionaire backers do.

But give Walker, or his speech-writers, some credit: His recent speeches are intriguing examples of a kind of political rhetoric jiu-jitsu, attempting to exploit a working class resentment against “bosses.” Instead of focusing on Sanders’ “billionaire class,” Walker tries to turn discontent against “union bosses,” then associates them with the bogeymen of “taxes” and “big government,” all on behalf of “individuals,” or at times, “hard-working people” or “the working class.”

Even if this gambit does not win him the nomination, or even keep him in the race for long, it illustrates some of the potential of a tortured class struggle politics from the Right, whose destructive potential should not be underestimated.