Right to Work Is Coming to the Public Sector. The Only Way to Survive: Social Movement Unionism 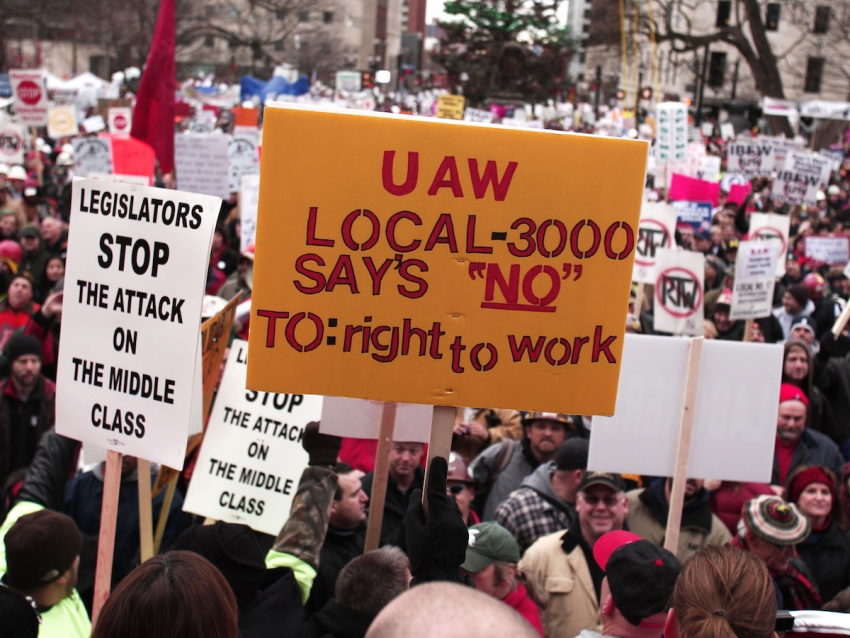 Top-down unions unaccustomed to active organizing have a lot to lose under a right-to-work regime.   (Bill Pugliano / Getty Images)

The new issue of Jacobin, commemorating the 150th anniversary of Union victory and emancipation, is out now. Subscribe today to get a copy or order a single issue.

Around the country, public-sector unions are either wringing their hands or strategizing about a response to the likely demise of the agency shop and the ushering in of “right-to-work” for all government workers.

Later this year, the Supreme Court is expected to rule that workers who choose not to join the union that goes to the negotiating table for all employees in their bargaining unit cannot be compelled to pay a fee to cover that representation. Unions say that scrapping this requirement creates a free-rider problem — workers receive the benefits of union representation without paying a thing — and unlawfully takes union resources.

It would be perhaps the greatest victory for the anti-union right since the passage of the 1947 Taft-Hartley Act.

The case, Friedrichs v. California Teachers Association, could expand last year’s Harris v. Quinn decision, which enforced right-to-work only for health care workers employed by private, state-funded entities. In Friedrichs, ten teachers backed by the right-wing litigation group the Center for Individual Rights (which has also fought affirmative action in higher education) are claiming they are required to fund an organization whose political aims they oppose.

According to CIR, the union “takes the inherently political view that more of scarce taxpayer resources should be devoted to education rather than other needed government services, such as parks or public safety,” and the “CTA bargains for stronger tenure protection, a position which many teachers, especially younger teachers, disagree.”

For many, the court’s decision to rule narrowly in Harris seemed like a temporary reprieve. Some unionists believe it was part of the conservative bloc’s strategy: create a precedent, then reverse Abood, the 1977 case that established the legality of agency shop agreements.

If the agency shop were dismantled, it would deepen the existential crisis plaguing public-sector unions and the labor movement more broadly.

A sudden, sizable drop in dues money could force unions to become barebones operations with little to offer members other than contract administration. Political departments would have to be scaled back, eviscerating the already dwindling influence labor has at the state level. Membership could plummet. And even if unions were successful in persuading workers to stick around, they would have to use organizing resources almost exclusively for dues collection rather than for strike organizing, political advocacy, or to fight management.

In addition, a favorable ruling for unions would likely only deliver momentary relief. Additional litigation would be all but inevitable, and the attacks on labor protections — in the courts and legislatures, at the state and federal levels — would continue. Whichever way the court rules in Friedrichs, the case is an unsettling reminder that the continued existence of the legal framework to which unions have grown accustomed is almost entirely dependent on the whims of nine judges.

It’s hard to talk about silver linings, but for radical unionists this is a time for deep renewal and rebuilding. Rank-and-file dissidents have long had doubts about most forms of automatic dues collection, worrying that such a set-up helps create an ossified system in which a complacent top never comes face-to-face with a demobilized bottom.

Case in point: as a result of the 2005 New York City transit strike, illegal under the state’s public sector labor law, Transport Workers Union Local 100 lost automatic dues check-off for eighteen months. Thousands of members didn’t pay dues in order to save money, as one would imagine, but dissident organizers in the union, who felt the leadership of Roger Toussaint had become too conciliatory toward management and anti-democratic internally, organized voluntarily to collect dues from members.

That kind of interaction with fellow workers on the shop floor was key in the next election — giving them an opportunity to meet members and urge them to pay dues, but also to build a basis of support against the incumbent. The leader of that group, track inspector John Samuelsen, successfully beat Toussaint’s chosen successor in the 2009 election, and remains president today, in part because dues collection allowed them to engage in grassroots organizing.

If anything, the fear Friedrichs inspires could force unions to do the type of everyday, internal organizing that dissidents and reform activists often complain doesn’t happen. While this could distract from other efforts, it could also drive unions to reconnect with their membership — actually improving their chances of surviving in the long term.

In addition, some argue it’s too fatalistic to equate right-to-work with union decline, because a well-organized union could still thrive. Union membership in Indiana has remained steady despite right-to-work legislation passed in 2012 (although a failure to reach good contracts in the years to come could spark a mass exodus). Culinary Workers Union Local 226, which primarily represents Las Vegas casino workers, maintains a 90 percent density rate in a right-to-work state because of its on-the-ground organizing.

The obvious counterexample to this is Wisconsin, where union membership has plummeted since going right-to-work. But there’s an obvious explanation: public unions there can’t collectively bargain. For unions who can demonstrate dues money makes it possible to fight and win, it’s a much easier sell.

Top-down unions unaccustomed to active organizing have a lot to lose under a right-to-work regime. Corporate unions where shop-floor delegates have been replaced by an 800 number — resembling insurance agencies more than social movement participants — would likely see more members depart than a union where rank-and-file workers are actively involved.

Unions representing workers at the lower end of the pay scale are also at risk: saving a hypothetical $35 per paycheck by opting out of union membership makes more sense for someone earning $35,000 than for skilled trades workers earning twice that.

Unionists rightly believe that all workers deserve a union and that there should be more solidarity across industries and sectors. But Friedrichs and the impending legal landscape reveal an uncomfortable truth: private-sector and public-sector unions are different in one key way.

While both are institutionally inclined to advocate for the expansion of their particular employer — the better to get a slice of the growing pie — private sector unions are more prone to falling into the trap of supporting very conservative projects, like the Keystone XL pipeline or increased military production. When government workers bargain along these lines, it usually (though not always) results in more public investment for things that leftists support, like public education, public hospitals, and public parks.

The last New York gubernatorial election illustrates this split well. In that race, the left-liberal Working Families Party (WFP) backed Democratic incumbent Andrew Cuomo, even though he built his first term on fighting government unions. The WFP’s union base is mostly comprised of members in building services who would benefit from an expanded private real-estate sector, which Cuomo backed. Private-sector growth often comes at the expense of the government sector — giving tax incentives to companies diverts money from direct government projects.

It’s useful to think of public-sector unions not just as a section of the labor movement, but as the organized force best able to push for increased public investment. The 2012 Chicago Teachers Union (CTU) strike, for example, was more about fighting for better public schools than about improving teacher pay.

All of the assaults on public-sector unions, from Friedrichs to Wisconsin, are directly related to the decades-long war on the public sector. “Starving the beast” is the mantra, and public-sector unions, which resist privatization and for tax spending on public works, are a central part of that food supply. Therefore, the struggle to rebuild and reform public-sector unions must be undertaken alongside progressive groups and constituencies outside of organized labor.

Following the lead of the CTU, unions in Massachusetts and Los Angeles have responded by electing reform slates and working with parents and students to fight for a more just education system, not simply a more generous contract. Seattle teachers led a standardized testing boycott in 2013 that has now spread across the country, and the ongoing dispute between the Seattle Teachers Union and the district also goes beyond pecuniary matters. This kind of social movement unionism must proliferate if public unions are to survive.

If Abood is eventually overturned — and unions should expect nothing less, whether it’s in Friedrichs or further down the road — organized labor may face depleted finances and hollowed-out membership.

But the spread of right-to-work also might impel some unions to get their act together. Unions with a tenuous relationship to their rank-and-file could be forced to establish firmer ties. Less money coming in could prompt unions who devote too much to officials’ pay to trim spending at the top. And above all, labor would have to rethink some of its most basic assumptions about the structure of unions and how to relate to members.

A reformation of American labor is badly needed. It will be up to leftists and other union reformers to make sure the death of Abooddoesn’t mean the death of the labor movement.