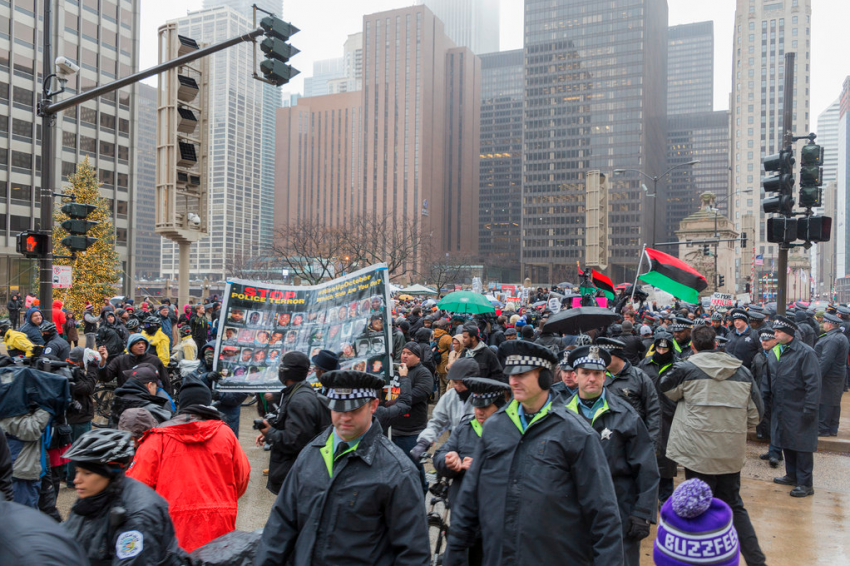 Amazing but true: not all Americans are devoting their long Thanksgiving weekend to expanding both their waistlines and their credit card debt. Many of us, despite holding down a job or jobs, often go hungry, and millions more are already drowning in debt, often paying usurious interest rates. And as “Black Friday” sales have spread over more days, including Thanksgiving, growing numbers of retail workers are losing a holiday with their families, on top of already having far less time off for paid holidays and vacations than their peers in other rich countries.

Yet Thanksgiving time is also becoming more of a focus for protests from labor unions and other social groups, taking advantage of the Thanksgiving themes of peace, cooperation and gratitude for abundance as a time to call for solidarity and support for those who have fewer material reasons for thanksgiving this year.

The trend got a big kick-off in 2012 with the actions of OUR Walmart, an organization of Walmart workers started by and principally supported up until the middle of this year by the United Food and Commercial Workers.   On Black Friday , busloads of Walmart workers and their allies set up picket lines as close as possible to Walmart store entrances on the heaviest shopping day of the year.  This year OUR Walmart has highlighted the problems of Walmart workers who often do not have enough food for themselves or their families, many of whom rely on food stamps because Walmart pays too little or provides inadequate hours of work.

This year, for example, a couple hundred Walmart workers, joined by 1400 supporters, have taken part in a Fast for 15—going without food for one day to two weeks before Thanksgiving and black Friday in order to win $15 an hour in pay and an adequate, predictable schedule of work.  For several days, a group of Walmart workers and supporters, such as Rev. William Barber, founder of the Moral Mondays movement, maintained a presence outside the New York City mansion of Alice Walton, the leading heir of the family’s Walmart fortune. OUR Walmart captured the event in an emotional video.

Then OUR Walmart called for more traditional demonstrations in major cities across the country against Walmart policies, such as the corporation’s refusal to re-hire most active OUR Walmart workers at five west coast stores. The company had recently re-opened the stores after keeping them closed for months, supposedly for plumbing problems. “Walmart was very clearly trying to pick off our people,” says OUR Walmart executive director Dan Schlademan. A former Pico Rivera OUR Walmart member, Denise Barlage, explained how at her wages, she often had to choose between buying gas to get to work or lunch, but if Walmart CEO Doug McMillion spent the average percentage of the wage or salary that Americans pay out each day for food, he could comfortably set aside $5,225—and even at Michelin 3-star restaurants for every meal, he would not go hungry (and have money left over).

OUR Walmart demonstrators also linked up with workers from other movements—in Seattle with Black Lives Matter, in Minneapolis with Target employees, and in New York with the Retail Action Project of the Retail, Wholesale and Department Store Workers (a division of UFCW).

“We need to understand how many people work in this country and don’t have enough to eat,’ says Cynthia Murray, 59, a founding leader of OUR Walmart who participated in the fast. “I fast all the time, involuntarily. It’s not just a problem for Walmart workers. If we [members of OUR Walmart] do actions, it’s for all of us. Walmart raised our minimum wage to $9, as a result of pressure on them. That’s not enough. But if we get Walmart up, the rest [of the retail industry] should follow if we continue to keep pushing. I want this to continue all year.”

OUR Walmart members’ call for much higher wages, starting at $15, and full-time work for those who want it, received reinforcement from two new reports issued by sympathetic non-profit research and advocacy groups. Both Demos and the Alliance for a Just Society presented evidence that a “living wage” in most of the country would be higher. Even the $10/hour minimum the company promises in 2016 would yield less than half the income needed for a single adult working part-time would need for a basic standard of living in 33 states, and working a 34-hour week-“full-time” by Walmart standards, a Walmart worker with one child would earn only 39 percent of the median needed for a living wage, as calculated using a formula developed at the Massachusetts Institute of Technology. The Alliance study concluded that even $15 is inadequate: a national living wage for a single adult would be $16.87. In 35 states and the District of Columbia, a single worker needs more than $15 an hour.

But workers, especially at Walmart, face systematic employer opposition to their attempts to raise their pay.  Based heavily on documents from a National Labor Relations Board case, Business Week reporter Susan Berfield (with help from Josh Eidelson) present in the current issue one of the most detailed accounts of how the Walmart intelligence apparatus tracks the slightest signs of organizing or discontent, even employing an arm of the giant defense and government services contractor, to help suppress workers’ efforts to improve their work lives (which would likely spill over to help most retail workers).

The demonstrations this year were different in tone and somewhat smaller, but they demonstrate the tenacity and resiliency of OUR Walmart as an organization and the new depth of worker commitment to changing Walmart. Considering the organizational upheaval that shook OUR Walmart’s foundation this year, it rebounded quite well.

More groups of workers and others constituencies have joined OUR Walmart in trying to transform a day that was once an all-American celebration of the morally and materially full life, then captured and warped into a day of mass marketing into a front in the fight for a more just society.

The biggest demonstration in Chicago had nothing directly to do with labor but rather was an attempt led by some African-American youth groups to shut down Black Friday shopping on ritzy North Michigan Avenue.  They were protesting not only the killing 18 months ago of a 17-year old black man, Laquan McDonald, by a Chicago police officer, Jason Van Dyke, but also the long delay in revealing and acting on evidence in the hands of police. After public pressure and a judge’s order led to release of one of several police videos showing McDonald’s killing, including footage of the officer firing most of his 16 shots into McDonald as he lay on the ground, the authorities ended what many observers think was a deliberate cover-up and indicted the officer last week—the first time a Chicago policeman has been charged with murder in 35 years.

Rev. Jesse Jackson, accompanied by several prominent black and Latino politicians, led a Black Friday rally for justice in the case. The Chicago  Teachers Union sent a strong delegation, and Service Employees International Union Local 1 president Tom Balanoff was a high-profile labor leader marching with Jackson.   However, more militant groups took control of the action, leading to shutdown of many elite stores, such as Neiman Marcus and the Apple Store.  Chanting “indict Rahm,” referring to Mayor Rahm Emanuel, the mobile groups found support but also hostility among shoppers. Although there were some scuffles, police made only three arrests, according to the Chicago Tribune

Unlike most of the labor actions, the protest against the police killing tapped into deep anger, especially among young people, and the crowd was led by people apparently intent at inflicting economic damage, should have—been a labor march. The black youth that are disproportionately victims of police misconduct are in large part victims of city economic policies that help black communities very little as well as historic legacies of racism found throughout society.  With less discrimination and more opportunity, many more of those young people would be heading into working or even middle class jobs. They are workers in waiting for opportunity and a job, which would make them likely strong union members disproportionately ready to sign union cards, not gang bangers making the lives of their neighbors and themselves more deeply traumatized.

Labor unions have their own history of falling short of what they need to do to combat racism, but as the presence of white labor leaders like Balanoff and CTU vice president Jesse Sharkey indicates, labor still remains one of the most important elements of a broad coalition against the consequences and continuation of systematic racism, but it would have made a strong statement if there had been high-profile participation by union leaders are more heavily white than SEIU and CTU. But it doesn’t help when a publicist and talk radio host, Maze Jackson, questions why any white leader should be among the heads of a march against racist police practices. “Explain to me why Tom Balanoff would be at the front of a march for a dead black child,” Jackson told the Chicago Sun-Times. “Does he have a black child?”

From peddling pro-union books to promoting fasts for the holidays, the scope of activity around Thanksgiving by progressive organizations, especially unions and other worker groups,   is making an old holiday new again, and much closer to its best meaning. Although it’s too late for this year’s Thanksgiving dinner, be prepared for next year with a guide to arguing against your relatives’ right-wing Fox drivel prepared by the Economic Policy Institute’s research director, Josh Bivens. Then again, reading Bivens’ guideis a good idea all year ‘round, not just at Thanksgiving, as are the protests themselves.