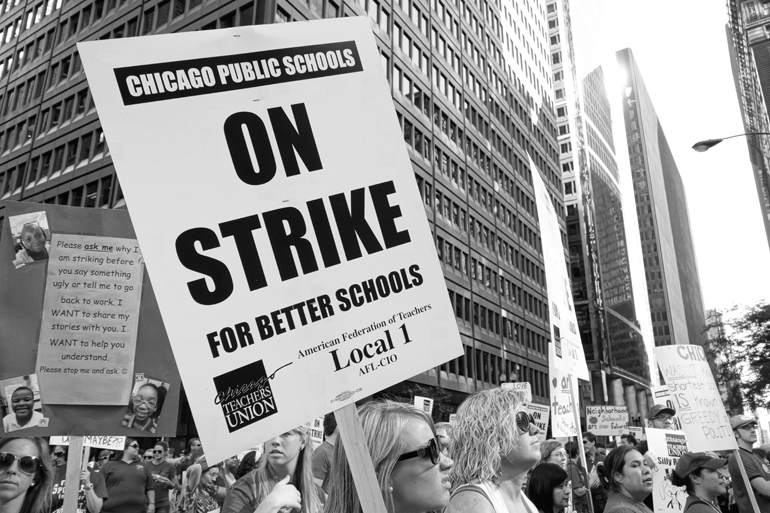 The Chicago Teachers Union currently finds itself in strange territory for a 21st-century U.S. labor union: defending a recent victory.

Labor has lost so often in recent decades that defeat has become most unions’ default position. So the CTU’s 2012 strike was a breath of fresh air for many American unionists: when unionized workers around the country were negotiating over the terms of their defeat, Chicago teachers fought back and actually won.

But such victories are never permanent. The contract the union negotiated during that strike has expired, and CTU members began voting Wednesday on whether to authorize another walkout. Given the strong internal push to vote “yes” and assuming the union meets the legally required yes vote threshold of 75% of its members, we will likely see another Chicago teachers strike sometime next year.

Yet a victory this time around will require more than proving that a strike can be a galvanizing tool for workers in the 21st century, or a public embarrassment of Mayor Rahm Emanuel and his handpicked, unelected school board. If the CTU is to win this battle, they will have to lay the foundations to end the city’s austerity regime.

It won’t be enough to publicly rebuke the rich and their political emissaries; Chicago teachers now have to figure out how to force them to give up their money.

The 2012 CTU strike was a critical battle for American labor, and unlike most similarly critical battles in recent decades, the teachers managed to win. That strike, as I’ve recounted elsewhere, was the result of over a decade’s worth of organizing, multiple failed union reform efforts, a commitment to union democracy and militancy, a commitment to making community and parent groups central to the union’s agenda, and much more. None of it was easy, but the strike proved it could be done and was universally acknowledged as a victory for the union.

But with labor as beaten down as it was in 2012, the bar for what qualified as a victory was low. That the CTU simply managed to go on strike without alienating poor and working-class Chicagoans and without producing a 21st-century equivalent of PATCO was enough to get American unionists’ blood pumping; the actual details of the contract that was negotiated during that struggle seemed secondary. At a time of widespread demoralization, the 2012 strike was a desperately needed moral victory.

But that moral victory has not produced enough tangible ones. The union has lost more often than it has won in the strike’s aftermath: despite massive outcry, Emanuel’s school board closed 50 public schools in mostly poor, African-American neighborhoods in 2013; union members have seen round after round of mass firings, with the immediate threat of 5,000 more hanging over the current contract negotiations; special education has been cut to the bone, with 500 layoffs over the summer; bus stops have been eliminated throughout the city; classrooms are so packed that teachers often report focusing on pure crowd control. Whatever confidence teachers gained from the strike, it has been smashed by an unending onslaught of brutal austerity measures.

Strikes offer workers, particularly in the public sector, an opportunity to create a crisis for elites. When a union like the CTU can establish itself as a body that fights not just for its members’ own narrow interests but for the entire working class, it can become the vehicle for a much broader leftist agenda.

For the CTU, a repeat of 2012’s strike, as a kind of 27,000-person middle finger to the mayor and the neoliberal project he represents, won’t be enough. The novelty of such a win has long dissipated; this time around—either in the early months of the spring or as late as the beginning of next school year—the union has to figure out how to use a strike to halt the forward march of austerity.

To prevent more closures and firings and threats to public sector workers’ pensions, Chicago needs new, progressive sources of revenue. It needs, in other words, to force a crisis for the city and the state around taxing the rich.

The union has insisted that the aforementioned austerity measures aren’t unavoidable, but that the district is deliberately creating a fiscal crisis in order to wring concessions from public-sector unions and gut social services.

Examples of this abound. The city is paying incredible amounts of money on badly negotiated deals with Wall Street for auction-rate bonds, “toxic” interest-rate swaps, and other exotic financial instruments. Researcher Saqib Bhatti estimates that the city has paid more than a billion dollars for swaps through 2014; the Chicago Tribune estimates the auction-rate bonds will cost the city in excess of $100 million more than if they had stuck to traditional bonds. The city could sue to renegotiate some of these deals, but Mayor Emanuel has steadfastly refused.

Though Emanuel promised reform on the city’s $1.4 billion tax increment financing (TIF) program, it still serves as a massive slush fund controlled by the mayor with no outside oversight, and has been repeatedly used to give away millions to wealthy corporations like United Airlines and downtown real estate developers. (The Chicago Mercantile Exchange, a central player in the city’s financial sector, was infamously approved for $15 million in TIF funds to carry out renovations for, among other things, new bathrooms.)

And there are major possible sources of revenue from the city’s richest that are currently going untapped. Firms on LaSalle Street, Chicago’s equivalent of Wall Street, like the CME and the Chicago Board Options Exchange are making absurd amounts of money (the CME brings in over $3 billion a year and is the most profitable corporation in Illinois); they could easily pay a financial transactions tax on each of their trades.

The union has made these issues central to much of its recent organizing. They will have to be central to the strike.

But an overhaul of the city’s financial system can’t be won at the bargaining table. As with the rest of US labor, the CTU’s enemies have successfully whittled down the scope of the union’s legally permissible bargaining and strikeable subjects. The union can’t stay on the picket line, say, until the city produces a financial transactions tax or a renegotiation of interest rate swaps—not legally, anyway. As it did during the previous strike, the union will have to walk the delicate line between upping the ante on taxing the rich without running afoul of the absurdly circumscribing law.

These cases are only the latest in the shockingly depraved, racist history of the CPD, which ranges from nearly two decades of physical torture of black men by a white police commander to the recent revelations about a West Side “black site,” Homan Square, where prisoners would sometimes disappear for days at a time without being charged and were allegedly abused. The city has spent over half a billion dollars in payouts to victims of police brutality over the last decade alone.

With the continued unrest in the wake of the video’s release, the union has an opening both to advance its own contract fight and to tie its organizing to the struggle against racist police brutality in the city.

The CTU has long made racial inequality in Chicago’s public school system and beyond central to their organizing. (The genesis of the union’s current radical leadership lies, in part, in rank-and-file members’ discontent with the previous leadership’s inaction on organizing alongside communities of color.) Since the release of the McDonald video, the union has remained true to form.

Union leaders encouraged members to join the militant and massively disruptive Black Friday protests in the city’s downtown shopping district and recently passed a resolution in favor of a new, democratically elected police review board. Given the union’s previously friendly relationship with the CPD—former Chicago Fraternal Order of Police president Michael Shields has spoken at CTU rallies, and Lewis pledged to put more police on the street when she was briefly flirting with a run for mayor—and the existence of a small but vocal pro-cop segment of the union’s membership, these steps are significant and not without risk.

The outrage over the Emanuel administration’s cover-up of the tape, which was clearly delayed to save his reelection campaign, has been widespread. Protests at City Hall and across downtown Chicago have become daily occurrences. Police chief Garry McCarthy was asked to resign, and other CPD leaders have tendered their own resignations; State’s Attorney Anita Alvarez will  probably not be reelected in March’s primary. Emanuel’s own approval rating stands at 18 percent; and incredibly, a majority (51 percent) said in the same poll that he should resign because of the scandal.

The likelihood that Emanuel will step down—barring any new revelations of gross, illegal misconduct—is minute. But he is incredibly vulnerable. Given the overwhelming number of CPS parents of color that backed the union over Emanuel during the last strike, a walkout that also spoke to the continued anger over the Laquan McDonald cover-up would be devastating for the mayor.

The last time Chicago Teachers Union members were on the picket line, they reminded American workers that it’s still possible to wage class struggle and win—not through timidity and collaboration with elites but through militant action, democratic organizing, and community support. In the next year, they will have a chance to do so again. It won’t be easy, but it may be as good of an opportunity as the union will ever get.