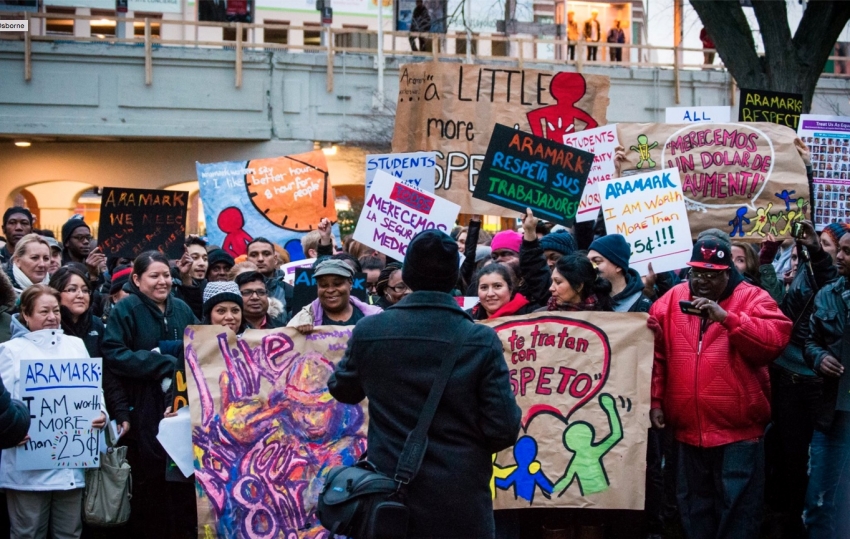 This piece has been updated with comments from Loyola's administration since its initial publication.

The “Jesuit Education” provided to students by Chicago’s Loyola University has five characteristics. One, the school’s website proudly states, is a “values-based leadership” that focuses on “personal integrity, ethical behavior in business and in all professions, and the appropriate balance between justice and fairness.”

Yet four of the university’s students say they are being punished for trying to push Loyola to live up to this credo. In recent months, Loyola students and workers have been waging a campaign for campus workers to receive a living wage, and for the administration to roll back what student activists say is a draconian demonstration policy, which requires students to request and receive approval from the Office of the Dean of Students for any on-campus protest not being held on the campus’s Damen North Lawn three days prior. (A moratorium on several sections of that policy was recently declared by the university, though it isn't clear how long that moratorium wil be in effect.)

The four students—along with their student government, a sponsoring organization of the protest—are being charged with harassment of a staff member and disrupting the operations of a facility after participating in a protest with on-campus food service workers. Officially handed down on December 18, the charges were preceded by a lengthy period of limbo where the students were threatened with charges, but not officially charged, two of the student organizers of the protests told In These Times. If found guilty, they could be put on probation.

The charges relate to a November 20 demonstration where around 60 protesters marched into the university’s student center and confronted Bill Langlois, the campus representative for Aramark, the foodservice contractor for which Loyola’s workers work. The protesters read him a list of demands before dispersing.

After being informed of the charges, Lillian Osborne, an organizer with the on-campus group USpeak former president of Students for Justice in Palestine (SJP) Loyola, and Melinda Bunnage, lead organizer for Students for Worker Justice (SWJ), say they were called in to attend an informational meeting. (Full disclosure: Osborne is a former editorial intern at In These Times.) The purpose of the meeting, they say, was for administrators to gather more information about the incident in question—although none of the students had been officially charged with anything.

“They’re basically asking you to incriminate yourself so they can charge you,” says Osborne.

“It’s really hard right now, not knowing if the student body is behind us or not,” she says.

Nonetheless, one positive outcome of the matter, according to the two, is that a sense of solidarity and “community spirit” is starting to develop on campus. When organizers have requested extensions for assignments from their professors, they have acknowledged that they are on the protestors’ side. Even so, the demands of balancing organizing with the routine stresses of college life have not been easy.

“It’s really difficult to be a full time student and be burnt out from organizing,” says Osborne. “You have numerous papers to do and then you’re slapped with charges, threatened with meetings, you have the administration trying to turn people against you. Your mental health is not great because there are so many things coming at you.”

Both Bunnage and Osborne say the charges won’t stop them from continuing to organize demonstrations on campus. In fact, they say, the university’s heavy-handed response is, in a way, encouraging, as it shows the pressure being put on the university administrators is working. The tumult around the charges can be frustrating, however.

“All of this is distracting from what the real problem is,” says Bunnage.

That problem, and the focus of protestors’ ire, is the fact that most of the workers at Loyola lack the health care benefits that activists say are routine at other Jesuit universities. In addition to this, workers are paid low wages. While dining hall workers succeeded in unionizing in 2010, Aramark refuses to grant them a pay raise of any more than 25 cents a year, which one dining hall worker calls a “slap in the face.”

In addition to this, protesters are also targeting various actions that they say are stifling free speech on campus, which they view as intimately connected to the struggle for worker justice. The school’s demonstration policy is the most visible manifestation of this. Loyola, a private university, first adopted the policy in response to a series of protests in 2007, sparked by a number of racist incidents on campus not dissimilar to those animating student demonstrations now. Its existence brings up the question of how university administrators can be trusted to fairly apply the policy when demonstrations have the potential to bring the university unwanted, and potentially embarrassing, publicity.

Even apart from this paradox, the policy is restrictive, making protesters jump through hoop after hoop to get their action approved. The university’s “Demonstration Proposal Form” requires organizers to specify the name of their demonstration, its start and end time, the number of participants and a short description of the demonstration.

Once the form is submitted and reviewed, the organizer must then meet with a university representative to discuss the demonstration, including “any intended movements to other areas of campus.” If the application is successful, the organizer then receives written notification that the protest may go ahead. All of this assumes that such information is precisely known by organizers ahead of time, as well as that a protest is not a spontaneous reaction to breaking news.

Protesters are also not allowed to use amplified sound, nor hold demonstrations at the same time as certain events, such as Board of Trustees meetings, when disruptive action would be most effective.

The demonstration policy’s enforcement doesn’t have a great track record. In 2014, a group of Palestinian students organized a protest at a Taglit-Birthright Israel event, a program that sends young Jewish people on free trips to Israel to “strengthen Jewish identity, Jewish communities and solidarity with Israel.” Although Loyola SJP denied it organized the protest, the group was nonetheless held accountable for violating the demonstration policy. It was temporarily suspended, its funding was revoked for a semester and its members were forced to attend training for how to engage in civil dialogue. Hillel, the group which organized the Birthright event, also failed to register its event. The university held it responsible for breaking a "no solicitation" policy and was also required to undergo such training.

Similarly, earlier this year, when black students on campus wanted to stage a demonstration over events in Ferguson, they were unable to because of the policy.

More recently, three students who organized a November 12 protest in solidarity with students at the University of Missouri were charged with violating the policy. The charges have since been dropped.

The alleged stifling of expression at Loyola goes beyond simply public protests and extends to private speech. Students say that in order to prevent students and workers from getting too close, Aramark forbids its employees from talking to students. Workers allege that they’ve been threatened with firing if they’re caught doing so. It’s an especially sore point for dining hall workers, who like to build relationships with the students who they watch grow up over the years.

“The students are what make us happy and keep us coming to work every day, so why can’t we smile and talk with the students?” one dining hall worker, Janet Irving, asks.

“We see them every day,” says another dining hall worker. “We know people’s names, special orders, so how can we not interact with students?”

Workers also allege they’re not allowed to speak in their native languages amongst themselves, even if, in some cases, workers’ lack of English knowledge means they have to rely on others to communicate for them. One dining hall worker, Eileen, who has worked at Loyola since 2006, was uncompromising in her defiance of the ban.

“This is America,” she says. “You can speak whatever language you want.”

Living up to Jesuit values

The Loyola students’ organizing efforts have their roots in Georgetown University’s Jesuit Just Employment Policy (JJEP), which was adopted by the university in 2005 after a steadily escalating, three-year long campaign. The policy not only established a living wage for campus workers—both contractors and university employees—that was indexed to inflation, it also guaranteed workers’ right to organize. Since then, activists have been attempting to export the policy to other Jesuit universities around the country—including Loyola, whose student government passed a draft of the JJEP in 2013, to no avail.

Although it’s contractors like Aramark that have direct control over their workers’ wages, organizers believe the university can hold the company accountable. The protests are part of a campaign of pressure aimed at making administrators do so.

It would seem to be a no-brainer for Loyola. Aside from its Jesuit values, it’s one of the few college in the country that offers a masters program in social justice, and when convenient, the administration touts the school’s commitment to social justice. In 2006, it launched a marketing campaign calling on students to “use your ethics as much as your Blackberry,” and declaring that “social justice isn’t just for rock stars.”

The university even maintains a social justice blog centered on events taking place in Chicago, on which there is no reference to the protests happening on its own campus. The only mention of the matter is a link to a September 28 article from Loyola’s student newspaper congratulating the university for raising its minimum wage by $1.75 to $10 an hour.

If the protesters succeed, it will be a significant victory for workers at the university. Several of the workers who attended the November 20 protest talked about the inadequacy of Aramark’s wages. For one worker, Toni Mitchell, the lack of health care benefits meant her mother was paying for her health insurance, including emergency surgery she had carried out earlier in the year.

“I’m living on my own,” she says. “The money that I make—I don’t have any kids—is still not enough for me to take care of myself, so just imagine if someone had a family, if someone had a husband and kids.”

For another worker, Ivory Lewis, free health insurance would mean being able to take on the stock advice about fiscal responsibility that is so often the conservative answer to the plight of low-wage workers like himself. Asked what free health care would mean for him, he replied: “I could save.”

Aramark could certainly afford to pay its workers a little more. The company posted a profit of $57.2 million in the fourth quarter of 2015, up from $44.5 million the year before. Its total profit for the year was $235.9 million.

Until they do, workers and students say they will keep fighting. Despite potentially facing probation, and the threat of suspension or expulsion if they’re charged again, Bunnage and Osborne say it won’t stop them from continuing to protest. As for the workers, Aramark’s employees have already been struggling for higher wages and health care benefits for several years now, and their fight will continue even after the students they’re protesting alongside have graduated. As long as the Jesuit values Loyola espouses, and falls short of, continue to attract socially conscious students to its campus, they’ll always have allies on hand.