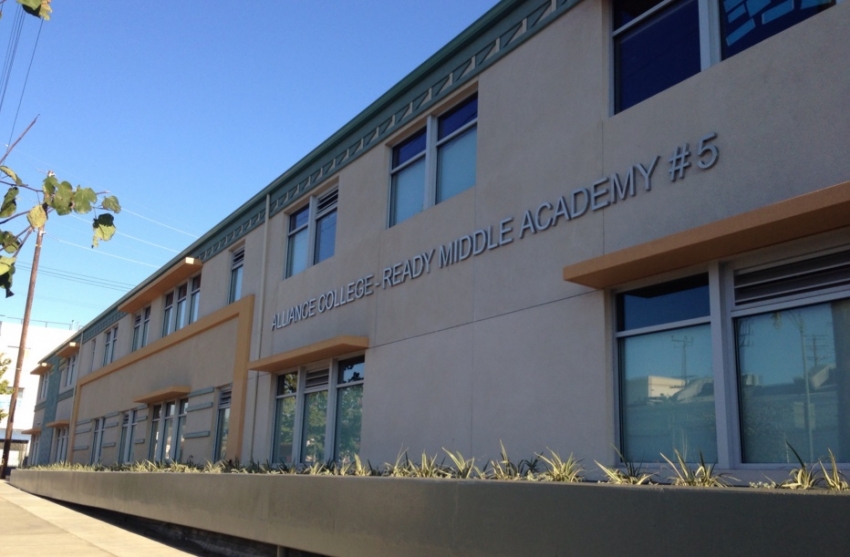 A formerly low-profile union organizing campaign by teachers at the largest charter school operation in Los Angeles is emerging into the public spotlight as the charter operator is ramping up its effort to defeat the organizing effort, teachers say.

The school operator, Alliance College-Ready Public Schools, has been so aggressive against the union that a local judge issued an injunction December 3 against the operator’s apparent labor law violations. But the injunction isn’t deterring Alliance’s broader efforts against the union, labor activists say, and the company is scheduled to go to court again next month in an unusual effort to overrule state labor law and employ slower and more cumbersome federal labor laws to defeat the union.

All of this is taking place in a highly charged political atmosphere surrounding the public schools system (formally known as the Los Angeles Unified School District), the United Teachers Los Angeles (UTLA) union and an anti-union charter school lobby backed by billionaires like Microsoft’s Bill Gates and local philanthropist Eli Broad (In These Times’ Mario Vasquez reported earlier this year on how this atmosphere was prompting fears of a teacher strike). The push to expand charter schools in LA is in full cry, union backers report, with the organizing drive at Alliance emerging as a rallying point for opposition.

“The campaign against us has been illegal, and incredibly demeaning and debilitating,” says Xodil Johansen, a teacher at one of Alliance’s 27 middle and high school campuses spread across L.A.  An active union supporter, Johansen was among some 70 teachers who opened the campaign in March with a letter requesting that Alliance administrators remain neutral as the organizing drive got underway. The administrators never officially answered that request, she says, and instead have steadily intensified efforts against the union.

“It’s escalated more and more,” Johansen says. “I think it really crossed the line when you started to get grilled by administrators. It was much more personal than it should have been. As teachers, we are professionals and the decision to join a union should be a professional one. The intimation was that you would suffer personally, that your livelihood was on the line. … Alliance has done everything to make it more personal.”

Based on continued complaints by Alliance teachers and UTLA, the California Public Employment Relations Board, or PERB, (under California law, charter school employees are considered public sector workers and fall under PERB jurisdiction) went to Los Angeles Superior Court Judge James C. Chalfant for an injunction against Alliance. According to a union statement:

The injunction … comes after Alliance management repeatedly violated an earlier temporary restraining order. ... In October, the judge ordered Alliance to meet with teachers and their representatives, stop blocking teacher emails, to end harassment and surveillance and not to interfere with teacher union organizers. PERB has already issued four unfair practice complaints against Alliance for violation of California labor law. The injunction will remain in effect until the PERB proceedings on all complaints are completed.

Alliance’s union-defeating efforts show signs of being part of a broader effort to expand the charter schools and defeat unions, says Jesus Quinonez, a partner in the Bush Gottlieb law firm that represents UTLA.

He pointed to a disclosure this fall that a philanthropic foundation controlled by local financier Eli Broad proposes a massive expansion of L.A. charter schools so that half of all the city’s students would be enrolled in charters (up from the current 16 percent). A memo outlining the proposal named Microsoft’s Bill Gates and Walmart’s Walton Family Foundation as potential donors to the multi-year effort. These names are all prominent in a national charter school lobby that is strongly opposed to unions, Quinonez notes.

It’s not surprising, then, that Alliance has enlisted the high-priced law firm of Proskauer Rose to make a direct attack on the right of L.A. charter teachers to organize, he continues. Court action is scheduled to begin January 28 in a case where Alliance is arguing that PERB should not have jurisdiction over the charter teachers, but that jurisdiction correctly belongs with the federal National Labor Relations Board (NLRB).

This is a blatant end run around PERB, which Alliance regards as too pro-worker and too pro-union, and a bet that the school’s anti-union campaign will be more successful at NLRB, Quinonez says. At the very least, Alliance seems intent in tying the union organizing effort up in court for an extended period of time, he tells In These Times.

“There’s a blatant disregard for the law. They see labor law as a nuisance,” Quinonez concludes.

“They’ve done a lot of illegal union busting,” agrees Johansen. Teaching is a challenging profession under any circumstances, she adds, and Alliance managers just make it more difficult with their heavy-handed tactics. “I don’t expect the union to be the answer to all of our problems, but we need a union as a first step.