Why Is SEIU Backing Hillary Clinton When Only Bernie Sanders Backs the Fight for 15 Campaign? 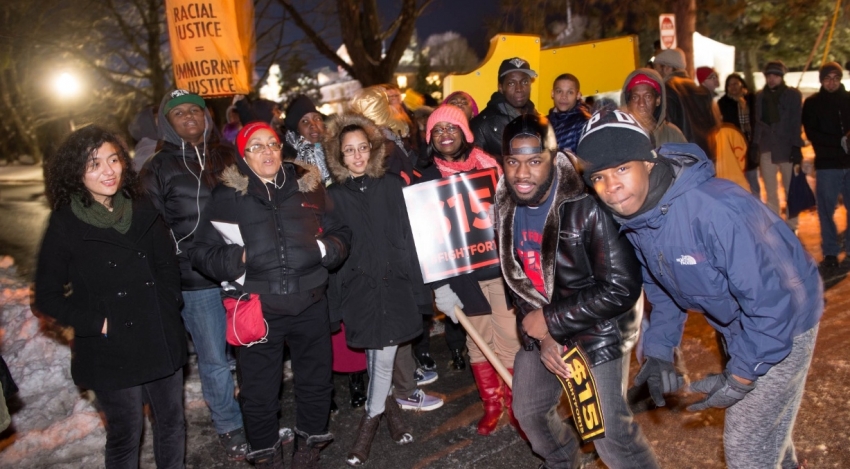 GOFFSTOWN, NEW HAMPSHIRE—The “protest pit” outside the Republican Presidential Debate at Saint Anselm College on Saturday evening was a fenced-in area in a field about a quarter mile down the road from the main entrance to the campus.

Bumper to bumper traffic ran in front of the pit. Odd given that NH State Police were letting few cars onto the campus. Most were told to turn around. No one that Republican leadership didn’t want in was getting anywhere near the Carr Center where the debate was taking place.

Powerful lights shone down on the scene from one side — lending it an eerie cast. Behind the fence facing the road were a couple hundred supporters for a few of the Republican candidates. But that was just the first layer. Behind them were about 500 activists with the Fight for 15 campaign — organized and bankrolled for $30 million as of last August by the Service Employees International Union (SEIU), whose leaders had bused in SEIU staff and members, student activists, and allies from other unions and immigrant organizations from around the region. At least 13 busloads from southern New England overall, according to the campaign’s registration form for the event.

A respectable showing, if not the “massive crowd of underpaid workers” that SEIU’s press release had promised.

So there they were. Supporters of a $15 an hour federal minimum wage. A fairly diverse group. Standing in a snowy field on a back road, enthusiastically waving banners — some quite creative, cylindrical and glowing from within like Japanese lanterns — and periodically trading chants with the mostly white right-wing activists in front of them.

Their presence was part of SEIU’s current tactic to raise the profile of the Fight for $15 campaign by protesting presidential debates and other high profile events like the Super Bowl in recent months. Which makes sense as far as it goes.

What doesn’t make sense is why SEIU pulled out 500 people onto a chilly windswept hill in suburban New Hampshire to protest for a laudable reform that their chosen presidential candidate, Hillary Clinton, absolutely does not support.

Clinton, like Barack Obama, has come out in favor of a $12 an hour minimum wage. Bernie Sanders, the only candidate whose politics are in line with labor unions like SEIU, is also the only candidate who publicly supports the Fight for $15 campaign’s main goal — a $15 an hour minimum wage. Barely a living wage at all in many parts of the country. Hardly the huge ask that opponents make it out to be. Especially given the wage freeze imposed on most Americans by corporations and our political duopoly since the 1970s.

Yet the leaders of the 1.9 million member SEIU backed Clinton last November. Joining the heads of a number of other large American unions in supporting the candidate with a proven record of pushing policies completely antithetical to union demands. Like the insurance industry scam known as Obamacare instead of “Medicare for all.” And they have already pumped millions to Clinton Super PACs over the heads of their largely voiceless members.

In response, a coalition of progressive unions and activist union members has formed Labor for Bernie to win as many union endorsements for Sanders as possible. Even as Sanders has amassed a $75 million warchest from mostly small donations — without the truckloads of cash that labor unions have traditionally lavished on Democratic candidates over the past few decades.

With Sanders doing very well in the NH polls as of this writing, and clearly capable of staying in the race all the way to this summer’s Democratic National Convention, it appears that SEIU leadership made a serious miscalculation this election. And the fallout from that miscalculation is already playing out in the very state where they organized the standout for their Fight for $15 campaign over the weekend.

Whether Bernie Sanders wins the nomination and election or not, current SEIU leadership — and the leadership of every union marching in lockstep with the worst elements of the Democratic Party — is going to face increasing pressure from its rank-and-file members to stop supporting pro-corporate anti-labor candidates like Clinton. This anger is likely to culminate in major grassroots insurgent campaigns aimed at removing union leaders perceived as sellouts — as has happened on many occasions in labor history. It remains to be seen whether such internal reforms will happen before the major unions collapse under the death of a thousand cuts being inflicted on them by their traditional political enemies and their erstwhile allies alike.

SEIU and less democratic unions like it could forestall the looming civil war in their own ranks — and increase the American labor movement’s chance of survival — by learning from the more democratic practices of the 700,000 member Communication Workers of America (CWA) — whose leadership stepped aside last year and let their members directly decide: a) If they should endorse any candidates for POTUS, and b) Which candidate they should endorse.

CWA members, some 30 percent of whom are Republicans, voted to back Sanders in December.

In These Times editorial staff are members of the Communications Workers of America. The CWA is also a sponsor of In These Times. Sponsors play no role in editorial content.

Jason Pramas is Boston Institute for Nonprofit Journalism's network director. He has been a member of three SEIU locals (925, 285 and 888) over the past 17 years, and helped lead a successful union drive with SEIU Local 509 last year at the cost of his job.