When Scalia Died, So Did ‘Friedrichs’—And an Even Grander Scheme To Destroy Unions 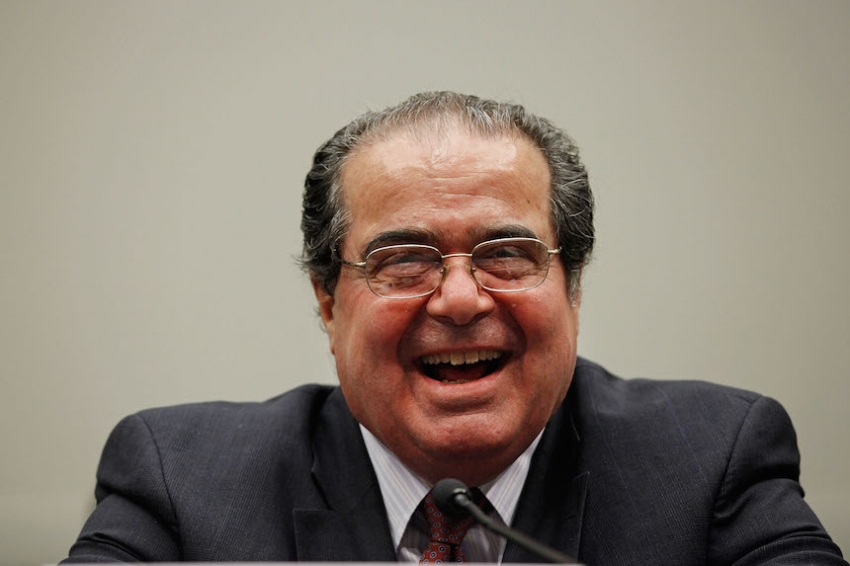 Some held out hope that Justice Scalia might go labor's way on Friedrichs, because of his understanding of the 'free rider' problem. But that hope was dashed during oral arguments.   (Chip Somodevilla / Getty Images)

Conservatives had a great plan in motion to decimate unions. If Justice Antonin Scalia hadn’t died in his sleep, they almost certainly would have pulled it off.

First they got the Court to rule their way in 2014’s Harris v. Quinn, which targeted home healthcare unions. Like "right to work" laws, the case sought to gut unions’ funding and diminish solidarity by saying that union members can’t be required to pay dues. The Court agreed, holding that the First Amendment does not allow the collection of fair share fees from home healthcare workers. The decision, written by Justice Alito and signed by the Court’s four other conservatives, also not-so-subtly invited further attacks on the funding and membership of unions.

Next came Friedrichs v. California Teachers Association, which sought to expand Harris to impose right-to-work on all public sector employees. The conservative Center for Individual Rights (CIR) rushed Friedrichs to the Supreme Court by essentially conceding at every lower court that under current law, it should lose. Friedrichs could only win if the Supreme Court overturned 39 years of precedent that date back to the 1977 Abood v. Detroit Board of Education decision.

When the Court accepted Friedrichs, there was some hope that Justice Scalia might provide the critical vote to save public-sector unions. This was not because Scalia had any great love for labor—he did not—but because he understood the basic economic theory of free riders: Just like any other enterprise, it can be difficult for a union to get its members to pay dues when they can get all the benefits of the contract for free. Scalia had said as much in a 1991 concurrence-dissent, and many were hoping that he would exercise consistency with Friedrichs.

However, the oral arguments on Friedrichs last month destroyed any such illusions. Justice Scalia, never coy about his beliefs, made it clear that he now believed that fair share fees should be eliminated. Though it’s often difficult to divine the Court’s final decision from oral arguments, it was plain after the Friedrichs arguments that labor would lose.

Accordingly, labor was scrambling to figure out how best to run a union in a post-Friedrichs world. Meanwhile, conservatives already had a plan in the works to expand what they saw as a certain win.

Last week, in a little-noticed case called D’Agostino v. Baker, the National Right to Work Legal Defense Foundation lost at the First Circuit in their attempt to argue that the First Amendment does not allow exclusive representation of home healthcare workers. This case sought to expand the Harris holding by arguing that the First Amendment prohibits home healthcare unions not only from collecting fees from workers who don’t want to pay, but also from bargaining on behalf of any worker who doesn't opt to be a member.

Former Supreme Court Justice David Souter wrote the decision for the First Circuit in D’Agnostino, relying heavily on Abood and its progeny. If history is any indication, National Right to Work was planning on appealing this case to the Supreme Court. The case  provided a glimpse of what the likely post-Friedrichs plan of attack would have been: After you win on the dues front, go after membership.

In addition, other cases, such as Bain v. CTA, that attacked the membership rights of unions but had been thrown out by lower courts, were likely to reappear.

However, on Saturday it was reported that Justice Scalia had been found dead. With his absence from the Court, conservative plans to attack union dues and membership through Supreme Court challenges may have dissolved for now.

If President Obama can get a new justice confirmed by a Republican-controlled Senate and that justice is permitted to take part in Friedrichs, then the case will likely be decided 5-4 in favor of labor.  If Republicans leaders made good on their vow to thwart any nomination by Obama, or the new justice does not take part in Friedrichs—either because the Court decides not to set it for rehearing or the justice must recuse herself—then all indications are that the case will be decided 4-4. In the event of such a tie, the lower court ruling is upheld—in this instance, the 9th Circuit’s dismissal of the case.

When the Supreme Court ties 4-4, no precedent is set. Anyone in labor worried about that outcome in Friedrichs can rest a bit easier remembering that no precedent is needed here. Abood created the precedent in 1977, and Friedrichs was a shameless ideological ploy to overturn that longstanding precedent. In Friedrichs, the CIR did not present the Supreme Court with the typical grounds for review: either a “a circuit split,” where lower courts issued conflicting decisions, or proof that circumstances had changed so significantly since Abood that the Supreme Court needed to reconsider its ruling. (Justice Stephen Breyer pointed to the absurdity of the Court overruling good case law for no good reason when he asked in oral arguments whether the Court should also revisit its landmark 1803 decision in Marbury v. Madison, which helped set the very terms of judicial review.)

Therefore, unlike other cases on the Court’s docket, if Friedrichs goes away quietly, it will stay gone until there is another conservative majority.

Without a Friedrichs decision that bans fair share fees, it is unlikely the Supreme Court would accept D’Agostino, and even less likely that it would decide against labor in such a case. Other cases attacking the membership rules of unions on specious Constitutional grounds are similarly unlikely to make it to the Supreme Court. With Justice Scalia’s unexpected death, conservatives will have to go back to attacking labor the old-fashioned way: at the state and federal legislatures.