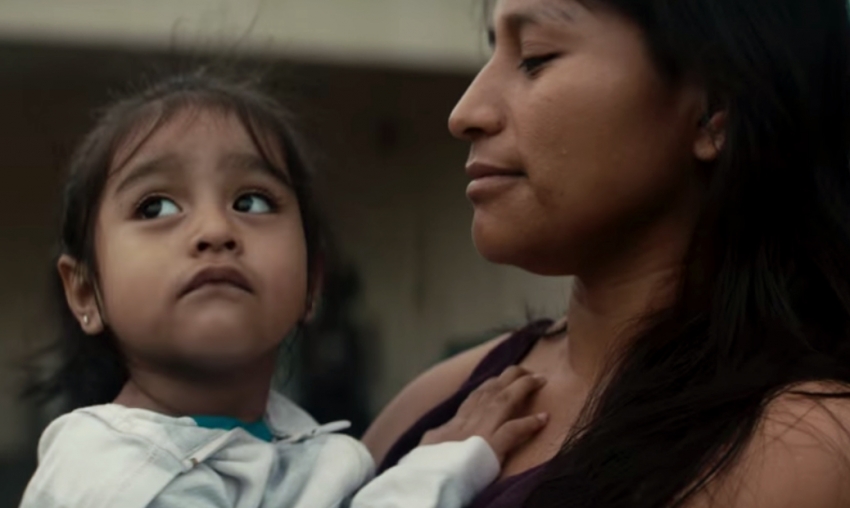 Bernie Sanders’ newest campaign video, which will air tomorrow night on the Spanish-language channel Univision, features the candidate ceding the spotlight to a representative group that doesn’t get a lot of play in most political ads: a migrant mother, speaking entirely in Spanish, who works in Florida's farm fields. The story behind the workers featured in the ad is one of quiet and passionate organizing far outside the Beltway.

Eight years ago, the Senator from Vermont came to Capitol Hill with a message from Florida. Bernie Sanders had just seen hell on earth, and he wanted everyone in Washington to know. He helped coordinate a Senate health, education and labor committee hearing on the tomato pickers of Florida. The Coalition of Immokalee Workers (CIW) were a fairly obscure group back in 2008—pre-Occupy, pre-Fight for 15, two years after the immigration reform movement had just suffered a defeat in Congress.

At the time, the economy was hurtling into the Great Recession, and the Latino migrants of Florida’s tomato fields seemed a far cry from the financial panic on Wall Street. But the workers had a story to tell, after struggling since the early 1990s for fair wages and rights at work: they had long suffered daily abuses, wage theft and oftentimes literal enslavement.

So the Senate’s lone socialist paid a visit to Immokalee. He spent days touring their work sites, walking alongside the workers as they lined up to grab work shifts at the edge of dawn, accompanying them to sun-scorched fields where they hauled bucket after bucket of greenish unripened tomatoes that eventually made their way into burgers and grocery aisles nationwide, to consumers oblivious to the drudgery and abuse behind their cheap meals.

Sanders discussed the workers’ plight in an interview with the Coalition’s homegrown low-power FM station. And back on Capitol Hill, he amplified the workers’ message of corporate accountability and economic justice. The unrest that would explode after the 2007-2008 financial crisis was still on the horizon, but Sanders struck a chord with the disaffected when he announced an initiative he was spearheading with Senators Ted Kennedy, Richard Durbin and Sherrod Brown to pressure Burger King and the producer-cartel Florida Tomato Growers Exchange to agree to CIW’s reform program: an additional penny paid to workers per pound picked.

The fair wages scheme, the core of a national Campaign for Fair Food, leveraged consumer and worker pressure outside of a formal collective bargaining structure or legislative mandate. CIW organizers recognized the global and horizontal nature of the agribusiness system and sought to restructure the “farm-to-table” supply chain by forming a broad-based social contract, popularized through colorful protest and outreach campaigns. Workers had been mobilizing well before Sanders lent his support, but his visit helped raised the national profile of the migrant workers' initiative as a human rights campaign.

Announcing the senators' backing of the fair wage program, Sanders said, “the struggles of the Immokalee workers resonated well beyond the local fields. He warned:

In the United States today the truth is that millions of American workers are being forced into a race to the bottom. … As poverty increases and as the middle class shrinks, these workers are seeing their standard of living in rapid decline. They’re working longer hours for lower wages…What we have on the tomato fields here in Florida are workers who in fact exist at the lowest economic rung of that race to the bottom.

Evoking solidarity across sectors and communities, Sanders urged the public to “deal with this issue from the understanding that if we look the other way, and accept the terrible exploitation that is taking place here, every American is endangered as the race to the bottom accelerates.”

His words anticipated a grassroots surge that would later fuel other movements galvanized by the economic crisis, including the Fight for 15 and the mushrooming of grassroots worker centers for non-union, low-wage, immigrant workforces.

The CIW's campaign also helped illustrate the connection between the food system and the financial system that foreshadowed today’s food justice movements, focusing on sustainable production and humane working conditions across the supply chain: “The American people need to know why financial institutions like Goldman Sachs and others …who are prepared to come up with hundreds of millions of dollars in bonuses for their top executives, are not putting pressure on companies like Burger King to do the morally right thing.”

Today, the Fair Food campaign has secured agreements with an estimated 90 percent of tomato growers and four major fast food brands, including McDonald’s and Burger King. The organizers are now trying to lock down the mainstream supermarket sector after scoring agreements from Walmart, Whole Foods and Trader Joe’s. Lacking the full force of a labor union, the CIW hasn’t resolved all the problems in the industry. But it has provided significant wage increases and instituted comprehensive safety standards. Under a comprehensive Code of Conduct, workers have sought recourse for more than 1000 disputes over issues like wage theft and sexual and verbal abuse.

The new Sanders campaign video captures the tenor of 2008, when economic collapse was upturning the status quo and forced some once-divided groups to adopt a common language of class struggle. The five-minute video is more of a miniature documentary about a worker-led campaign that forged a template for labor organizing in a globalized economy—perhaps a metaphor for the Sanders' campaign, but also an example of how Sanders and his backers see his campaign as bigger than this election cycle. The video does not highlight Sanders's presidential platform, but speaks to a deeper grassroots ethos of social change from which his politics emerged.

One of CIW's member-activists, Udelia, reflects on the group’s progress over the past several years. “Politicians never came to Immokalee” before Sanders’s made his visit, she recalls. “He didn’t keep silent about what he witnessed here in Immokalee. … There are now more rights and worker support. We started to see changes in our wages. It really improved our lives. I could buy small things for my children. This changes a person.”

The Coalition is now embarking on a multi-state protest march, while their old ally Bernie is barreling ahead on the campaign trail. Their two intersecting paths, which will cross soon in the Florida primary, continue the momentum that started eight years ago. The sense of collective outrage they articulated then has only grown louder, inspiring other grassroots movements and stoking fierce reaction from the right. Neither the workers nor the Senator expects immediate victory to be on the horizon, but they've never doubted they’re headed in the right direction. So far, neither have been proven wrong.