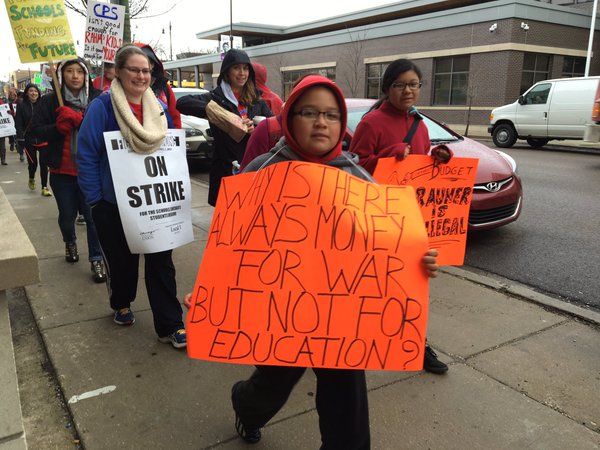 A child carries a sign reading "Why is there always money for war but not for education?" on Chicago's Northwest Side Friday morning. (Micah Uetricht / Twitter)

Even at 6:30 a.m., there was no lack of enthusiasm from teachers who were on strike at the Maria Saucedo Elementary School in Little Village yesterday morning. “We are here because we love our students and because we are out here setting an example, we are raising a whole new generation of activists,” special education teacher Sarah Chambers yelled from a bullhorn.

The Chicago Teachers Union (CTU) officially walked out for the day over what they say is an unfair labor practice (ULP) amid contract negotiations with Chicago Public Schools (CPS): the unilateral decision by the district to stop giving steps and lanes pay increases (the former based on length of time served in the district, the latter the result of new credentials like master’s degrees), in violation of their previous contract, which expired in June 2015 but still covers teachers.

It was thus a legal strike, the union argues—contrary to the views of CPS leadership.

But whatever the legal justification, the action was a rare move by a union in the United States (though more common in other countries)—a political strike aimed at the right-wing billionaire Republican Gov. Bruce Rauner over his refusal to raise needed revenue (or even reach agreement on a budget).

“This strike is targeted primarily to Bruce Rauner,” explained union president Karen Lewis, decked out in CTU red as she visited South Side schools in the morning. “He’s the one holding the budget hostage.”

The schools and other public services need long-term, sustainable funding, not a flimsy “quick fix,” Lewis said. That means new revenue, which the union wants to come primarily from Chicago’s and Illinois’s wealthiest citizens.

Standing in front of a school where she previously taught, King College Preparatory School, Lewis greeted a former colleague who had earlier in her career demonstrated the importance of special education. Now the school faced cuts in special ed. King School also has a fairly good library, but no librarian.

The one-day strike, which culminated in a mass march of several thousand (estimates went as high as 15,000) teachers and supporters through a cold rain at rush hour in downtown Chicago, was also an occasion to express solidarity between CTU and other unions and community groups, not only for more funding for public needs, but a different balance of spending: more on education and aid for young people, less on policing and incarceration.

At a forum at Chicago State University, a largely black public school on Chicago’s South Side, Black Youth Project 100 joined with CTU in leading a discussion about the implications of the threats to the school as a result of its receiving no funds from the state as a result of the budget impasse. With layoffs of half the staff imminent and the school facing potential closure, BYP100 leaders, such as co-chair Damon Williams, said Rauner’s policies have been devastating for the university.

Rauner argues that the tax cuts already implemented and those he hopes to enact are needed to make businesses competitive in the state. But Williams, the member of BYP 100, argues that if the tax revenues were maintained and expanded, the state could keep open and expand colleges that could make businesses more competitive by providing an educated work force that also could reduce black youth unemployment and imprisonment.

Another university that primarily serves working-class students of color, Northeastern Illinois University, was the site of a protest on the Norhwest Side of the city, with a New Orleans-style “jazz funeral” march to mourn the “death” of higher education. One protestor carried a large pole with a skeleton in a cap and gown at the top, bearing a sign that read “stop killing public education.” Protesters say Gov. Rauner has nearly eliminated MAP grants, which allow low-income students to attend college.

Speakers included socialist Seattle City Council member Kshama Sawant, and AFT President Randi Weingarten, who exclaimed that they were all “fighting for the basic principle of the American Dream.” that principle being evoked several times by different speakers. Richard Grossman, a Professor in the College of Arts and Sciences at NEIU and a member of AFT Local 4100, echoed the point, saying that public education and higher public education serve as “entry points for many African Americans, Latinos, and minorities.” Attacking it, he says, as Rauner has done, would only take away opportunities from those seeking to make a better live for themselves and their families.

About 100 people also gathered outside the Illinois Youth Center Chicago on the city’s West Side. They led a march—sponsored by Racial justice groups including Project NIA, Assata’s Daughters, Black Lives Matter-Chicago, the Chicago Freedom School and others—from the youth prison to Henry Suder Elementary. One of the protesters present was Julian Thompson, a doctoral student at the University of Chicago whose research centers on incarceration.

Thompson, who has a daughter in CPS, described the school system as “not suitable for children to grow and develop in ways that are meaningful.” He lamented the punitive disciplinary practices that all too often lead to prison and noted the militarization of his old CPS high school, which now has metal detectors and police guards both of which contribute to an environment where students face difficulties when they try to go to the bathroom.

Large, organized groups of students joined the day’s actions. After marching alongside picketing teachers in the morning, more than 50 students gathered downtown at noon to hold their own action: a speakout about the impact of budget cuts on their schools.

Students talked about losing art classes, school counselors and favorite teachers before marching to City Hall, where they attempted to deliver “pink slips” to Mayor Rahm Emanuel. The mayor himself never showed up, but students later began chanting, “Where’s Rahm? Right here!” as they passed a giant inflatable rat set up near CPS headquarters.

Cameron Miller, a senior at Wendell Phillips High School, doesn’t buy that the strike hurts students. “Any kid who shows up to today’s protests is going to learn a lot,” he insists.

To prove his point, Miller came up with a canny way to make participation in today’s actions “count” for students: He talked his school administrators into signing off on service-learning hours for those attending the youth-led marchFriday afternoon. Since the Chicago Students Union (CSU), a registered non-profit, was involved in the action, it meets CPS’ guidelines. More importantly, “there’s definitely an educational basis for this,” he says seriously. “Civic education.”

CSU was born out of the fight to halt Chicago’s 2013 mass school closings. Unlike the teacher’s union, the group has no formal status under labor law, but that doesn’t stop it from representing students’ interests through collective action. In recent years, students fighting school closings and high-stakes testing have also formed unions in cities like Philadelphia, Newark and Providence.

Miller is relatively new to CSU; he says his first time protesting was last fall, when the city released graphic video showing the fatal police shooting of black teenager Laquan McDonald. From there, he connected with other students organizing against police brutality and the underfunding of African-American and Latino schools. The effects of this are plain at his high school, located in the city’s Bronzeville neighborhood.

“I have a drama class with 48 kids in it,” he says. “We literally have people standing against the wall because there’s no place for them to sit.”

At DePaul University, Colin Macombs said he has a stake in the day's protest because he is a future teacher.

“They're trying to blame teachers for problems in schools but really it's a budget problem. We're fighting to stop the cuts,” Macombs said.

Members of the Fight For 15, many of whom work at McDonald’s, prominently participated in rallies at the schools.  They calculate that 51 percent of fast food workers receive some form of public assistance, which costs $368 million a year.  Raise pay at McD’s and other fast food workers and the state would have that $368 million for education, the group says.

Also, raising the pay of fast food workers would not only help young people pay for expenses of college or other training. It would help the many adults with children who work in low-wage industries. With wages at $15 an hour or more,  family income would increase, providing more stability to students, and more time for adults to spend with their children, argues Stevenson Moore, 46, a McDonald’s worker since he was 16 and now responsible for the care of seven children.

Lewis embraced the community support, but still sees labor union solidarity and engagement on public issues as crucial for improving life in Chicago.  “We’ve had a dormant labor movement for many years,” Lewis said, “and it will not get better until the labor movement gets moving again.”

The CTU and its supporters in Chicago’s labor movement may be again put to the test in the near future: After insisting that the teachers’ action was illegal in the run-up to the strike, CPS CEO Forrest Claypool announced last night that the district would sue the union for the cost of the strike and would pursue an injunction to prevent the union from ever pursuing such an action again.

"Lawbreaking cannot go unchecked, there has to be accountability for blatantly breaking the law," Claypool said, according to DNAinfo Chicago.

CTU leadership made clear its position on Friday’s legality ahead of the strike.

"We are going to strike over things that judges might consider illegal, but we consider moral and right," CTU Vice President Jesse Sharkey told a labor-friendly audience a week earlier. "There might be judges that disagree with us..." He shrugged. "But we disagree with them."