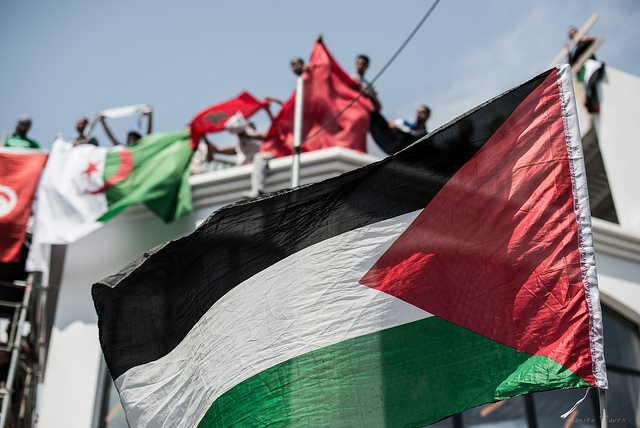 In an address on Middle East policy last month, Bernie Sanders —the first Jewish American to win a presidential primary—did something virtually unheard of in contemporary U.S. politics when he called for an end to “what amounts to the occupation of Palestinian territory” by Israel.

The only candidate to skip the pro-Israel lobby group AIPAC’s annual conference in Washington, Sanders instead delivered a speech from Utah in which he acknowledged that “today there is a whole lot of suffering among Palestinians” due to the occupation.

“For a presidential candidate to break from the mold, like it seems maybe Sanders is doing, and to talk about the fact that the occupation needs to end, is something that’s exciting to Palestinians,” says Manawel Abdel-Al, a member of the general secretariat of the Palestinian General Federation of Trade Unions (PGFTU).

“We hope this isn’t just election talk,” he adds. “People were very excited about Barack Obama as well and we didn’t get much progress. But we’re hopeful.”

Abdel-Al—who lives in occupied East Jerusalem—is visiting Chicago this week at the invitation of the United Electrical Workers (UE), the U.S. Palestinian Community Network, and Jewish Voice for Peace to enlist the support of the U.S. labor movement in the Palestinian liberation struggle. He addressed standing-room-only audiences of rank-and-file unionists at last weekend’s Labor Notes conference and again on Tuesday night at the local UE Hall.

A machine repair technician by trade, Abdel-Al has been a union activist for three decades. He tells In These Times that throughout their history, Palestinian trade unions have always waged a “two-part” battle. “We represent workers in the class struggle for socioeconomic rights, but also in the national, political struggle for freedom and independence,” he says, noting that the Palestinian labor movement has managed to endure despite a century of repression and upheaval under British, Jordanian, and Israeli control.

Abdel-Al’s PGFTU represents 14 private sector unions in the West Bank and Gaza. In the West Bank, Abdel-Al says the PGFTU negotiates collective bargaining agreements with employers and successfully convinced the Palestinian Authority (P.A.) to pass a minimum wage law in 2012. The union federation is now calling for the P.A. to implement social welfare policies by next year.

Meanwhile, over 25,000 public schoolteachers (not affiliated with PGFTU) staged a one-month strike earlier this year to call for the P.A. to honor a promised pay raise that had been “left on the backburner for three years,” Abdel-Al says. The strike ended last month after President Mahmoud Abbas intervened and promised back pay and a 10 percent wage increase.

Abdel-Al’s PGFTU is not recognized by the Israeli government, leaving unprotected the approximately 92,000 West Bank Palestinians who regularly cross into and out of Israel and Israeli settlements for work. Abdel-Al explains that while many of these workers have legal permits to be employed in Israel, many others are unauthorized workers—hired under-the-table by Israeli employers—and face extreme exploitation. “When they’re injured on the job, they’re simply taken to the closest border checkpoint and left there. The employer disappears.” Regardless of their legal status, Abdel-Al says that all Palestinian workers in Israel, including Palestinian citizens of Israel, face discrimination, arbitrary dismissal, low pay, and a host of other issues on the job.  “All we want is freedom from oppression,” he says, asking U.S. unionists to do whatever they can to help their fellow workers in Palestine.

While the activist network Labor for Palestine has been pushing U.S. unions to get behind BDS for the past decade, serious strides have only been made in the two years since Israel’s 2014 bombardment of Gaza, which killed 1,462 civilians. In December 2014, BDS was endorsed by University of California graduate student workers with UAW Local 2865—a vote that was controversially nullified by the UAW’s International Executive Board earlier this year. Following Local 2865 and UE’s lead, the Connecticut AFL-CIO also passed a resolution in favor of BDS late last year.

BDS is gaining traction within the international labor movement as well, with support from unions in South Africa, the UK, Norway, Brazil, and elsewhere. Last April, it was endorsed by Canada’s Confederation of National Trade Unions (CSN), which represents 325,000 public and private sector workers in Quebec.

“I think BDS is a powerful tool to educate people on what is happening in Palestine,” Nathalie Guay, coordinator of CSN’s international relations, tells In These Times. Guay, who helped connect the PGFTU and UE, hopes that more North American unions will not only endorse BDS, but also send their members on delegations to Palestine to learn about the situation first-hand. “Every single person who goes there comes back as an activist for Palestine. We need more of that.”

Noting the growing international influence of unions from the global south, including Brazil’s pro-BDS Central Única dos Trabalhadores, Guay predicts the international labor movement will continue to increase its support for Palestine in the years to come. “I think there will be some evolution,” she says.

This evolution is already evident in the International Trade Union Confederation—a global organization composed of the world’s major labor federations—which has issued increasingly critical statements of Israel since the 2014 assault on Gaza.

“We believe statements are not enough and hope the ITUC will change its policies in a more definitive way to help end the occupation,” Abdel-Al says. “But no matter how small, this is a positive change.”

Abdel-Al took time out of his busy schedule this week to visit the Haymarket memorial—a tribute to martyred Chicago unionists who were hanged in 1887 as a result of their activism in support of the 8-hour workday. “This is the birthplace of the worldwide labor movement. Around the world, we celebrate labor on May 1st because of what happened in Chicago.”

He wants U.S. labor activists to remember that occupied Palestinians are also oppressed workers. “Any activism, any support for us would be in accordance with a slogan that is well known by the working class everywhere—workers of the world, unite! Through solidarity and willpower, workers can make changes and bring about the achievement of rights for persecuted and oppressed people everywhere.”