A Tale of Two Teamsters: Building a Community-Minded Union in Mid-Century St. Louis 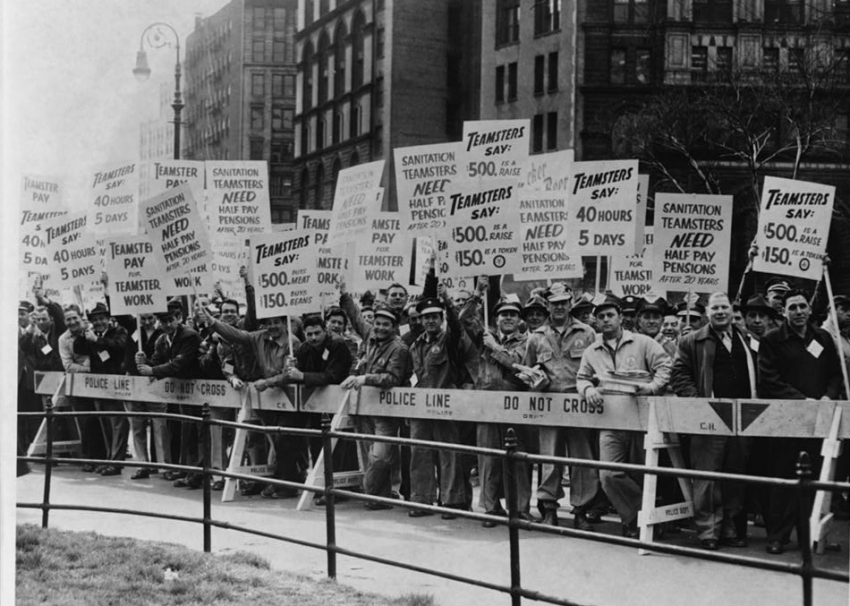 Teamsters in New York City protest sometime in the 1950s. (Library of Congress)

Long before the birth of Teamsters for a Democratic Union in the mid-1970s, the International Brotherhood of Teamsters (IBT) was hostile terrain for creating model local unions. In the 1930s, warehouse workers and drivers in Minneapolis revitalized Teamsters Local 574, under the leadership of Farrell Dobbs and other labor radicals. They organized widespread community support for a citywide general strike—now much celebrated by labor historians. After its success, Dobbs and other Teamster militants helped organize over-the-road trucking throughout the mid-west.

What was Local 574’s reward from the IBT? It wasn’t a lot of favorable publicity in the Teamster magazine. Instead, General President Dan Tobin expelled the Minneapolis strikers from the union in 1935. A year later, the membership of 574 was readmitted but under a new local charter. When the politics of Local 544 (its successor) continued to offend Teamster headquarters, the local was put under trusteeship and its elected officers ousted in 1941. Among the Teamster goon squad members dispatched to Minneapolis for that dirty work was Jimmy Hoffa, father of the current IBT president and an admirer of Dobbs’ organizing methods (if not his Trotskyist views).

The positive, but less threatening, changes made in St. Louis Local 688 occurred under the leadership of Harold Gibbons. Gibbons developed a long and mutually beneficial relationship with Hoffa, during the latter’s rise to power in the 1950s and ‘60s. His closest local collaborator was Ernest Calloway, a leading African-American trade unionist, labor editor, and civil rights activist, who met Gibbons when they were both Depression-era organizers in Chicago.

Like Harvard-educated Powers Hapgood, the industrial union activist profiled in Bussel’s previous biography, Gibbons and Calloway were sympathetic to democratic socialism. (For more on Bussel’s earlier book, see my review for The Nation.) Neither had positive experiences with the Communist Party or the Congress of Industrial Organizations (CIO) affiliates most influenced by CP members. They came from coal mining families in Pennsylvania and Kentucky respectively; Calloway actually worked in the mines and once described himself as a “black hillbilly.”

Their shared union vision was shaped, in part, by youthful “exposure to the UMWA, which had an admirable if imperfect record of attempting to organize across racial and ethnic lines.” Their personal development as working class leaders owed much to labor education—in Gibbons’ case, a summer school stint at the University of Wisconsin’s School for Workers and in Calloway’s case, attending Brookwood Labor College and, later, Ruskin College in Oxford.

From CIO to IBT

Gibbons aided organizing or strikes among adult educators employed by the Works Progress Administration, Chicago taxi drivers, and, later, textile workers throughout Illinois and Indiana. Calloway became a member of Gibbons’ AFT-affiliated teachers union and then plunged into CIO organizing of African-American “red caps” who assisted railway passengers with their baggage. In 1940, he bravely risked imprisonment as “one of the first African-Americans to seek conscientious objector status solely on the basis of racial discrimination”---a stance not popular with red cap union officials, particularly after the Japanese attacked Pearl Harbor.

During the war, Gibbons moved to St. Louis. There, he took over a warehouse workers local affiliated with the CIO, engineered its rebranding as an independent union and, then in 1949, “stirred disbelief and anger in both local and national labor circles” by merging with the IBT. Calloway was among those he recruited to help implement “his vision of socially engaged unionism,” amid the larger “unabashed pragmatism” of the Teamsters.

In the heyday of Local 688 during the 1950s, “total person unionism” is not a term that either Gibbons or Calloway would have employed. But their conception of how a good local should function—with members strongly connected to the union and the union playing an influential role in the community—remains quite relevant today. One of organized labor’s under-utilized resources is rank-and-file connections to community institutions, whether churches, neighborhood associations, ethnic and fraternal organizations, political clubs, or other civic groups.

Gibbons and Calloway built their local into a social and political force in St. Louis by encouraging what Bussel calls “working class citizenship”--rank-and-file activism in the community and local politics, as well as on the job. Local 688 formalized this approach with an actual “community stewards” program, training hundreds of members and then deploying them in electoral campaigns and local political struggles for racial justice, better public services, and a healthy urban environment. Bussel lauds these efforts to turn an “occupationally and racially diverse union of 10,000 members” into “a model of labor progressivism that gained national and even international attention.”

In a 1946 speech—that could serve as a rebuke to certain “organizing unions” and workers centers today—Gibbons “articulated the profound psychological dimension that lay at the core of his philosophy of unionism.” In his view, union building was not the job of “college professors, smart lawyers, or high salaried executives.” But rather, it was a task for “the men and women of the shops,” where “far too many of us fail to realize our powers, our abilities, our potentialities.”

Local 688 was, in short, not the kind of mobbed-up, big city Teamster local more typical of Jimmy Hoffa’s emerging power base in the 1950s. But, as Bussel notes, “an ally of Gibbons’ caliber and reputation” was useful to Hoffa’s plan to succeed Dave Beck as Teamsters president during a period when Teamster racketeering and corruption tainted all of organized labor and led to the IBT’s 1957 expulsion from the AFL-CIO.

According to Bussel, Gibbons hitched his wagon to Hoffa in the hopes that the latter’s  “mastery of power relations might be harnessed in the support of a more ambitious social agenda.” In the early 1960s, Gibbons even left St. Louis to serve as Hoffa’s executive assistant at Teamster headquarters. In that capacity, he persuaded his boss to make a $25,000 donation to Dr. Martin Luther King’s Southern Christian Leadership Conference. But then “Hoffa rejected Gibbons’ suggestion that he speak at King’s 1963 March on Washington and also refused to seek strong anti-discrimination language in trucking contracts.”

Bussel reports that Gibbons “experienced continual frustration in his efforts to enlarge Hoffa’s perspective on racial justice” and “remained an isolated voice on the issue that he regarded as essential to restoring the trade union movement’s moral legitimacy.” Hoffa, for his part, kept his sidekick from St. Louis on “a short leash.” Hoff was “fiercely ascetic in his personal life” and, thus, disapproved of Gibbon’s “womanizing” and “hanging out in nightspots and hobnobbing with Hollywood celebrities,” a bon vivant lifestyle supported by his IBT expense account. (As longtime Chicago labor activist Sid Lens once noted, Harold was “a man of many contradictions.”)

After Hoffa was jailed in 1967 for jury tampering, attempted bribery, and fraud, he left Frank Fitzsimmons in charge of the IBT. Gibbons did not fare well under Fitz, as he was known. To Gibbons' credit, he was an outspoken opponent of the Vietnam War and played a key role in Labor for Peace, hosting its founding conference in St. Louis. He even joined a trade union delegation to Hanoi during the war, met with top North Vietnamese officials, and conducted Washington briefings on his trip when he returned.

Enemy of Tricky Dick and Fitz

Such activities landed him on the famous “enemies list” maintained by Republican President Richard Nixon. Closer to home, Gibbons bucked Fitzsimmons by casting the only Teamster executive board vote against endorsing Nixon for re-election over Democrat George McGovern in 1972. Fitzsimmons remained Nixon’s leading labor ally until the latter’s forced resignation, in disgrace, during the Watergate scandal two years later.

In the meantime, Fitzsimmons retaliated against Gibbons by replacing him as Teamsters Central Conference chairman and warehouse division director. A few months afterwards, Gibbons was even forced to resign from his elected positions at Teamsters Joint Council 13 and Local 688. In Bussel’s description, that purge signaled the end of a “twenty year quest for total person unionism that Gibbons and Calloway had pursued in St. Louis.” Gibbons retreated to a life of retirement luxury in Palm Springs, CA. “closer to the celebrity culture that had long captivated him.” Shortly before he died in 1982, the one-time syndicalist firebrand was reduced to begging the Reagan Administration (unsuccessfully) for a job as director of the Federal Mediation and Conciliation Service.

Unlike Gibbons, Calloway remained politically engaged at the grassroots level in St. Louis. When their joint vision of an activist, community-minded union was no longer achievable in Local 688, Calloway became a neighborhood organization leader. He was also a locally influential writer and teacher of urban studies, civil rights leader, and mentor to community activists. When he died in 1989, The St. Louis Post Dispatch hailed him as a man who “labored for the underdog,” declaring that “St. Louis is a better place for his efforts.” Calloway’s union career may have been overshadowed, in his lifetime, by that of his high-flying Teamster co-worker. But, now thanks to Bussel’s dual biography treatment, this “rugged fighter for social justice” will get the broader recognition he deserves.

Fighting for Total Person Unionism should not be relegated to the labor history bookshelf; too much of its content will seem eerily familiar to anyone active in U.S. unions over the last 35 years. The management resistance and labor movement dysfunction that Gibbons and Calloway struggled to overcome, while building worker organizations of a better sort, have definitely not disappeared. And within the union officialdom, there is still no shortage of the same personal and political contradictions that Harold Gibbons displayed, during his rise and fall as a singular Teamster.