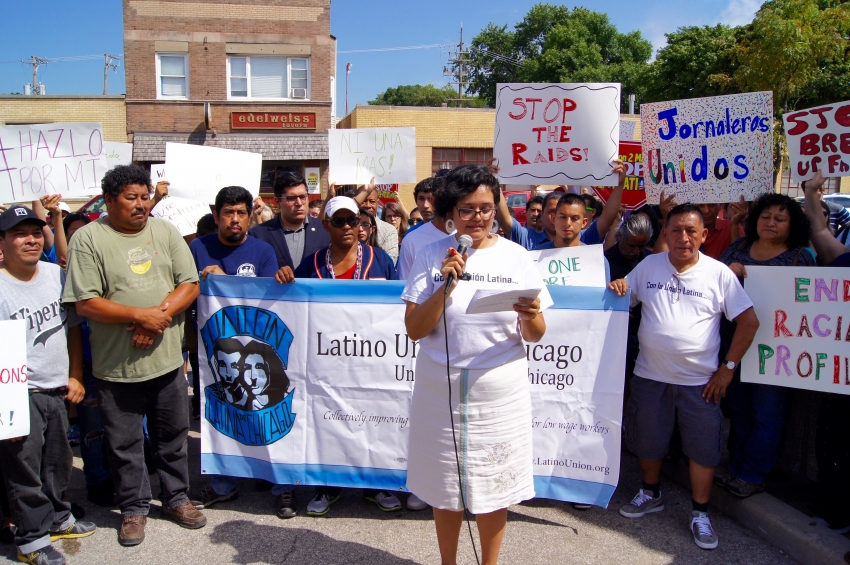 A Shell gas station sits on the corner of West Belmont and North Milwaukee Avenues in Chicago. Most days, day laborers gather there, looking for work. But last week, a small lot east of the gas station became the site of a street corner raid.

Three workers were detained Friday after ICE (Immigration and Customs Enforcement) agents pulled into the hiring site and demanded identification and papers from those present. While some workers were lucky enough to walk away, those who remained were fingerprinted and processed. Their fate was decided in an instant, without any warning.

“I wanted to leave, but they grabbed me by the arm and immediately asked for my identification,” said Aristides Banegas, who witnessed the raid.

He told reporters that ICE agents exited a blue Ford Explorer and warned the men not to move.

“I showed them my state ID and they told me to move along. I saw them take at least one of my friends who didn’t have papers, and they chained his arms and legs and put him into a car,” Banegas said in Spanish.

He spoke Tuesday at a press conference organized by the Latino Union of Chicago and Organized Communities Against Deportations (OCAD). They were joined by various other supporting organizations, including the Chicago Teachers Union (CTU), the Illinois Coalition for Immigrant and Refugee Rights (ICIRR) and Mujeres Latinas en Acción.

The groups accuse ICE of overstepping its bounds.

ICE claims that operations like the one that took place Friday help to improve public safety.

According to a 2014 memorandum from the Department of Homeland Security (DHS), enforcement and removal policies are meant to prioritize national security, public safety and border security.

“While conducting a law enforcement operation targeting specific gang members in Chicago, an ICE officer and an ICE special agent made three arrests on Friday, and later released one individual after it was determined that he did not fall within ICE enforcement priorities,” Montenegro said.

But activists believe other forces may be at play.

“We have been seeing that around the city of Chicago ICE is actually targeting places where Latino communities usually gather,” said Analía Rodríguez, executive director of the Latino Union of Chicago. “What we’re really doing is denouncing the steps that ICE is taking regarding the racial profiling of our community and targeting places where specifically Latino men are gathering and looking for work.”

Rodríguez said her organization will file an official request with the DHS Office for Civil Rights and Civil Liberties, asking for an investigation into possible civil rights violations, “specifically the violation of these workers’ Fourth Amendment rights,” which bar unlawful searches and seizures.

“We’re also filing a Freedom of Information Act (FOIA) request to the Chicago Police Department to discover if local police knew about the raids that took place, in addition to filing a prosecutorial discretion request with ICE to demand the release of the detained workers and that their cases be closed, as well as an update on the status of the detained workers,” Rodríguez told reporters.

Speaking at the press conference, Banegas said he was happy for the support he saw there. Attendees burst into chants of “Ni Una Más” (“Not One More,” in Spanish) and applauded and cheered cars honking their horns in support as they passed. Still, he said, he’d like to see more.

“In the 23 years that I have been here looking for work, I’ve seen my friends lose their lives and their limbs,” Banegas said. “I would like all of our public officials to speak on our behalf.”