Lipton Workers Vote to Unionize: “Everyone just got tired of it” 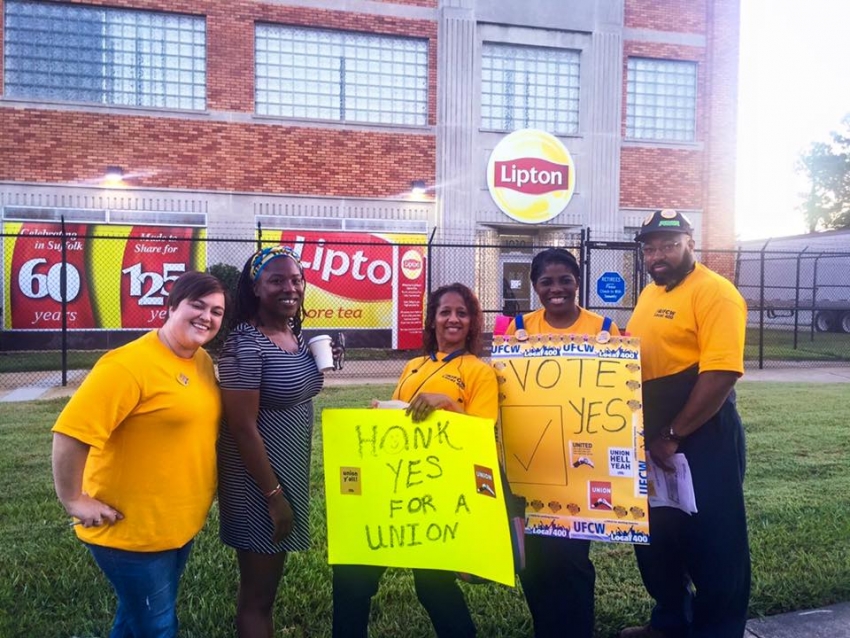 The organizing drive came after years of declining benefits—loss of sick pay, supplemental time off and a downgrade in insurance coverage considered too expensive for what it offered. (UFCW Local 400/ Facebook)

Juanita Hart has worked as an operator at the Lipton Tea manufacturing plant in Suffolk, Virginia, for 25 years. She’s seen a lot of change in that time, but nothing like what happened last month.

“I was crying like I had won the lottery,” Hart told In These Times. I was so glad and I was so happy because I’ve been told for all this time, all these years, that it would never happen. And when it happened, I had so much joy that all I could do (was) cry.”

She was talking about workers’ decision to join a union.

They voted, 108-79, in an election held by the National Labor Relations Board on August 26. More than 200 workers at the plant, which makes nearly all of the Lipton Tea sold in North America, will now be represented by United Food and Commercial Workers Local 400.

The organizing drive came after years of declining benefits—loss of sick pay, supplemental time off and a downgrade in insurance coverage considered too expensive for what it offered.

“We’re hoping that maybe we can get some of this back,” says Robert Davis, another 25-year veteran at the Lipton plant. “I don’t know if we will or not. We would like to try.”

Another important issue that affected most workers was what is alleged to be forced overtime work, also known as “drafting.” Workers at the Suffolk site have been known to work a routine of 12-hour shifts for 13 days before getting a day off.

In These Times reached out to company representatives for comment on the campaign and the issues behind it. They did not immediately respond.

“They tried to, attempted to talk to them and they just turned a deaf ear toward us. And it’s just like we were robots and what they said went. It was not going to change and we had to do it or we could leave,” says Davis. “The employees just—they became so disgusted with what was going on and everyone just got tired of it.”

Workers at the plant approached UFCW Local 400 in June.

“The workers were the ones who took ownership of it from the very beginning,” says Kayla Mock, an organizer with Local 400. “They very clearly understood that their union was something that they needed to build, almost like a tangible thing, and they built it from the ground up—they just owned it.”

Another important factor in the campaign was the fact that Lipton’s parent company, the international behemoth Unilever, was seen as treating its unionized workers far better in other locations. At a Hellmann’s plant in Chicago that is organized with the UFCW, for example (the Hellmann’s mayo brand is another Unilever property), overtime pay is much more immediate and a health care plan similar to the one offered to the Suffolk workers is half as expensive. A conference call between the workers at the Hellmann’s plant and those at the Lipton one helped spread the word of the benefits of union representation.

The campaign wasn’t the first time that organizing was attempted at the plant in Suffolk. In recent years, Hart says, workers’ efforts were met with resistance by those in charge.

“Every time it would be—someone said the word ‘organizing’ or ‘union,’ any of those kinds of words were used, the next thing you know we were called into a meeting and we were shown a film about how disruptive it would be to have a union,” she says.

But now, after years of decreased benefits and a near-$100 million upgrade of the Lipton facility, pro-union workers have finally carried the day.

“Top reason to me why people aren't afraid anymore (is) because they're fed up,” says Hart. “When you strip the person of their dignity, and you have no respect for the person, and you’ve taken away what they feel, their self-worth … that’s when you stop being afraid.”