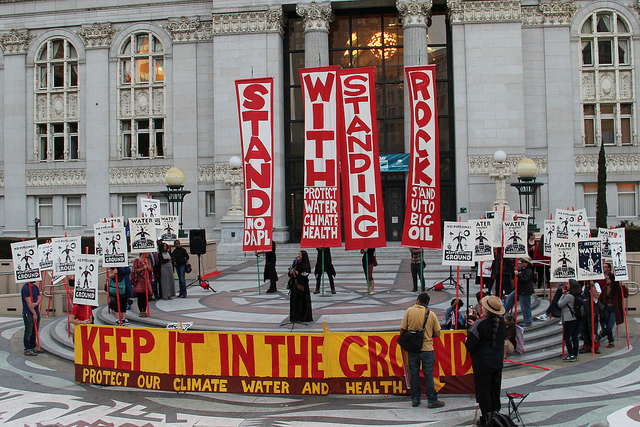 This week has shown a stark divide between parts of American labor and today’s social movements. Progressive unions face an uphill battle on many issues, within and outside of organized labor. (Peg Hunter/ Flickr)

The American Federation of Labor and Congress of Industrial Organizations (AFL-CIO) came out this week in support of the Dakota Access Pipeline, the construction of which was delayed last week by an order from the Obama administration—a decision that itself stemmed from months of protests led by the Standing Rock Sioux.

In a statement, Richard Trumka, AFL-CIO president, said, “We believe that community involvement in decisions about constructing and locating pipelines is important and necessary, particularly in sensitive situations like those involving places of significance to Native Americas.”

But it “is fundamentally unfair,” he added, “to hold union members’ livelihoods and their families’ financial security hostage to endless delay. The Dakota Access Pipeline is providing over 4,500 high-quality, family supporting jobs.

“(Trying) to make climate policy by attacking individual construction projects is neither effective nor fair to the workers involved. The AFL-CIO calls on the Obama Administration to allow construction of the Dakota Access Pipeline to continue.”

It’s an open secret in labor that North America’s Building Trades Unions—including many that represent pipeline workers—have an at-times dominating presence within the federation’s 56-union membership. Pipeline jobs are well-paying union construction gigs, and workers on the Dakota Access Pipeline (DAPL) can make some $37 an hour plus benefits. As one DAPL worker and Laborers International Union member told The Des Moines Register, "You’ve got to make that money when you can make it.”

But an old blue-green mantra says, “there are no jobs on a dead planet.” The parts of organized labor that have taken that phrase to heart are far from unified around Trumka’s DAPL backing—even within the AFL-CIO. National Nurses United (NNU) has had members on the ground at Standing Rock protests and others around the country have participated in a national day of action.

"Nurses understand the need for quality jobs while also taking strong action to address the climate crisis and respecting the sovereign rights of First Nation people,” said RoseAnn DeMoro, NNU’s executive director and a national vice president of the AFL-CIO.

In response to the federation’s endorsement, DeMoro cited the work of economist Robert Pollin, who found that spending on renewable energy creates approximately three times as many jobs as the same spending on maintaining the fossil fuel sector.

NNU isn’t alone. As protests swelled this month, the Communications Workers of America (CWA) released a statement in support of the Standing Rock Sioux, stating that “CWA stands with all working people as they struggle for dignity, respect and justice in the workplace and in their communities.”

Unions like the Amalgamated Transit Union and the United Electrical Workers have each issued similar statements supporting protests against the pipeline, and calling on the Obama administration to step in and block the project permanently.

For those who follow labor and the environment, however, the above unions might be familiar names. Many were vocal advocates for a stronger climate deal in Paris, and sent members to COP21 at the end of last year. They were also those most vehemently opposed to the Keystone XL pipeline, and all supported Bernie Sanders’ primary campaign against Hillary Clinton. While friendly to progressives, these unions have tended to have a relatively limited impact on bigger unions, like the American Federation of Teachers and the American Federation of State, County and Municipal Employees (AFSCME).

According to Sean Sweeney, though, this small group of unions might now be gaining strength. “Progressive unions are becoming a more coherent force,” he told In These Times.

Sweeney helped found a project called Trade Unions for Energy Democracy, which works with unions around the world on climate change and the transition away from fossil fuels, including the National Education Association and Service Employees International Union (SEIU) Local 32BJ in the United States. He also runs the International Program for Labor, Climate and the Environment at City University of New York’s Murphy Institute.

“It could be said that it’s just the same old gang making the same old noise, but for health unions and transport unions to go up against the building trades and their powerful message and equally powerful determination to win ... that was a bit of a cultural shift in the labor movement,” he said, referencing the fights against the Keystone XL and Dakota Access pipelines. “That suggests that it's going to continue.”

Sweeney mentioned, too, that it wasn’t until much later in the fight around Keystone XL that even progressive unions came out against it. “A lot of these unions,” he added, “know a lot more about energy and pollution and climate change than they did before.”

Between Trumka’s DAPL endorsement and the Fraternal Order of Police’s endorsement of Donald Trump for president, this week has shown a stark divide between parts of American labor and today’s social movements. Progressive unions face an uphill battle on many issues, within and outside of organized labor. The question now—on the Dakota Access Pipeline—is whether today’s “Keystone moment” can break new ground in the jobs versus environment debate.