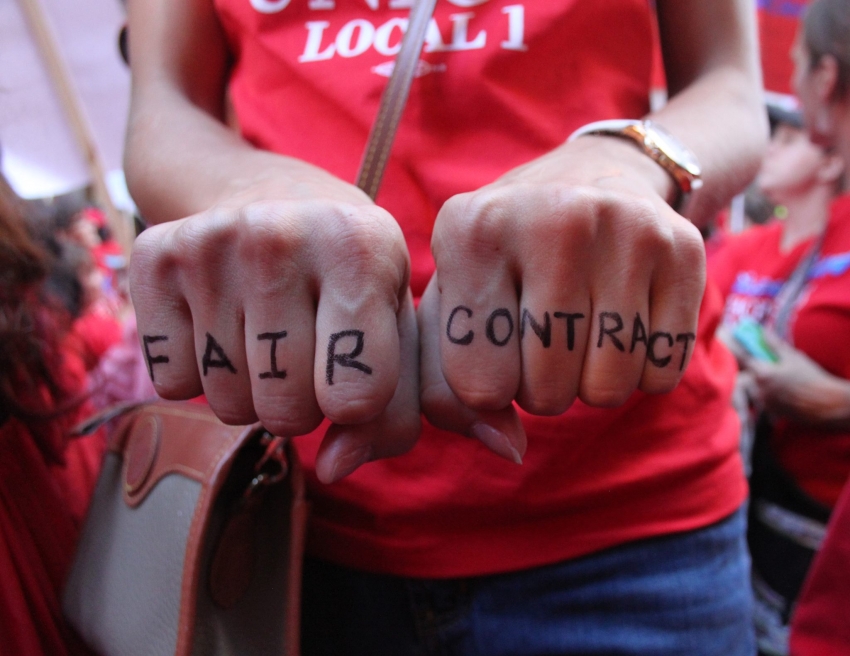 The contract dispute is linked to profound and pernicious questions regarding class and racial divisions in the city and state. (Chicago Teachers Union/ Facebook)

This story has been updated with an agreement.

The Chicago Teachers Union (CTU) reached a last-minute deal with the Board of Education late Monday night, narrowly averting a strike.

"There will be classes in the morning," said CTU President Karen Lewis, announcing the tentative contract agreement.

Chicago teachers had planned to strike starting Tuesday in an escalation of their campaign to defend their jobs and improve the education of the students and the communities they serve.

Four years ago, the CTU won a new contract with a dramatic 7-day strike that captured national attention. Although the CTU was unable in the following years to stop Mayor Rahm Emanuel from closing more than 50 schools, last April the union continued its contract fight with a mayoral-appointed Board of Education by calling for a 1-day strike over the failure of talks to renew their contract.

With the CTU and Chicago Public Schools (CPS) at loggerheads over a new agreement, the teachers had prepared to establish picket lines once again at schools throughout the nation’s third-largest school system, taking on the Board of Education, Emanuel, the obsessively anti-union Republican governor, Bruce Rauner, and the local business class.

The fight is, in various ways, about money. The Board of Education, under Emanuel’s control, says it must cut costs since it is running a deficit. One of its proposed solutions would eliminate a longstanding agreement to pay for part of the cost of teachers’ pensions, effectively cutting teachers’ pay.

Rauner advocates a harsh and ideological strategy designed to humiliate the teachers and break their union. He has said bankruptcy might be the best option for CPS—a move that would allow a court to void union contracts.

But the strike was also about more than money. The CTU sees negotiations as a chance to focus on the quality of education for Chicago students. The union wants to reduce class sizes, guarantee that all schools have libraries and librarians, give teachers professional support and training to teach more creatively, and provide social services and counselors who can help students resolve problems that may be interfering with their learning or leading them to drop out.

“In my 13 years of teaching, schools and students have never faced this type of assault,” said Lillian Kass, a special education teacher in CPS and a CTU delegate. "Teachers and students have already suffered too many cuts. More cuts are not acceptable and not sustainable."

The contract dispute is linked to profound and pernicious questions regarding class and racial divisions in the city and state. The backdrop to the current conflict is the decades-long failure of the state government to follow the state’s constitutional mandate to carry the primary responsibility for financing public education.

As a result, schools are very unevenly and inequitably funded by local property taxes. The tax burden is greatest on working-class households, while businesses successfully resist paying their fair share. Chicago taxpayers suffer an additional burden: While state taxes—including taxes paid by Chicago residents—help fund teacher pensions for the rest of the state, Chicago residents alone pay for all pension-related costs for their schools.

Low-income communities, especially those that are predominately black, have suffered most from shortcomings in funding, school closings and many other CPS policies. Reinforcing the results of other investigations, a recent report by WBEZ, the Chicago public radio station, revealed that new school construction in areas of the city where the population is growing is carefully planned to maintain high levels of racial segregation, even though it would be easy to use the construction to create a more integrated school enrollment.

Union leaders see community groups as crucial allies in the fight now unfolding. Chicago Teachers Solidarity Campaign (CTSC), with a dozen or more members, played an important role in the 2012 strike, says Steven Ashby, a labor educator at the University of Illinois. Ashby, who is the leader of a renewed CTSC, says the new coalition already includes more than 50 groups.

The CTU, CTSC and many other progressive groups are pushing for the city to redirect to the schools as much as possible from Tax Increment Financing (TIF), a funding tool. The money is largely a “slush fund” spent at the mayor’s discretion for business-related projects, and reformers argue that it could provide significant funding for schools.

The issues posed by the teachers’ strike involve a tangle of inherited pathologies of racism, business dominance, and corrupt local politics—together forming a Gordian knot that blocks progressive reform. The negotiations may not cut the knot, but they could help direct the next blows for reformers tackling the many challenges beyond the current, critically important task of educating the city’s children.