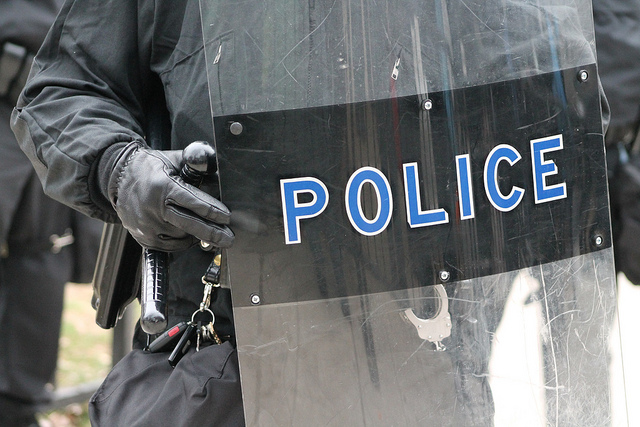 Although SEIU is not part of the AFL-CIO, organizers hope it will spark a wider discussion about the role police and their unions play. (Elvert Barnes/ Flickr)

In July 2015, the University of California’s student-workers union, United Auto Workers (UAW) 2865, passed a resolution calling on the AFL-CIO to terminate the membership of the International Union of Police Associations (IUPA).

Now, after a series of meetings in Los Angeles throughout October, the same resolution is making its way through Service Employees International Union (SEIU) 721, a local representing public service and nonprofit employees in Southern California. Although SEIU is not part of the AFL-CIO, organizers for the resolution hope it will spark a wider discussion about the role police and their unions play.

The resolution was first approved by the African-American caucus of SEIU 721 on October 6, and later by the local’s Latino caucus on October 19. The endorsements came after collaboration and presentations by Olufemi Taiwo, a UAW 2865 member, and Julia Wallace, a member of SEIU 721.

“When I heard about the UAW’s resolution,” Wallace tells In These Times, “I thought this is great. This is a way for us, as union members to show our support for working-class people, but also to be clear that the police have played a role historically … not just [as] oppressors of Black people, Latino people, LGBT people, disabled people, but also against workers, against working-class people as strike-breakers.”

Wallace says her goal is to get the resolution approved by the executive board of SEIU 721.

“I think the best thing is a politicized, organized and educated workforce,” says Wallace. “That’s the best thing that we could have, because even if it doesn’t get passed through the executive board, then there’s a discussion within our union meetings. ‘Okay, so, what is the role of the police? What are we going to do to organize against them? How are we going to protest?’”

The deaths of Michael Brown, Eric Garner and Freddie Gray at the hands of police, and the subsequent rise of the movement for Black lives, helped push the Black Interests Coordinating Committee (BICC), a UAW 2865 caucus, to write the original resolution.

The AFL-CIO did not officially comment on the resolution, but Carmen Berkley, the federation’s director of civil, human and women’s rights, told Buzzfeed’s Cora Lewis in January:

“We are not in the business of kicking people out of unions ... What we are in the business of is having conversations with our law enforcement brothers and sisters about how they can have different practices ... I do think there’s a lot of reconciliation that needs to happen between communities of color and law enforcement, and we want to be the bridge that helps them get there.”

When asked about Berkley’s remarks, Taiwo tells In These Times, “She’s posing the issue as if what it is—is there’s individual victims of police violence and individual perpetrators of police that need to sit down and have a mediation.”

Wallace says that as long as police side with “bosses” on the picket line and police unions “unequivocally [defend] the police murdering people” then they should not be members of labor organizations.

“They can defend themselves just fine. Their pensions aren’t challenged, their healthcare benefits aren’t cut, their raises continue to happen and ours are always on the chopping block,” Wallace says. “Ours are always in question and there’s a reason for that. It’s because they defend the wealthy.”

The IUPA responded to UAW 2865 shortly after the resolution passed, with IUPA legislative director Dennis Slocumb telling Workers Independent News: “It’s impossible to stand for the rights of working-class people while opposing the people in law enforcement. We are working class. And we think this is nothing but a publicity stunt for a group that’s struggling for some sort of attention.”

Slocumb noted that the resolution did not explicitly call out any other labor groups that represent and bargain for police.

Moving forward, Wallace says she hopes to get other unions to endorse the resolution, while also organizing a project to build a general strike against police violence.

“People are talking about this and it’s just the beginning,” she says.