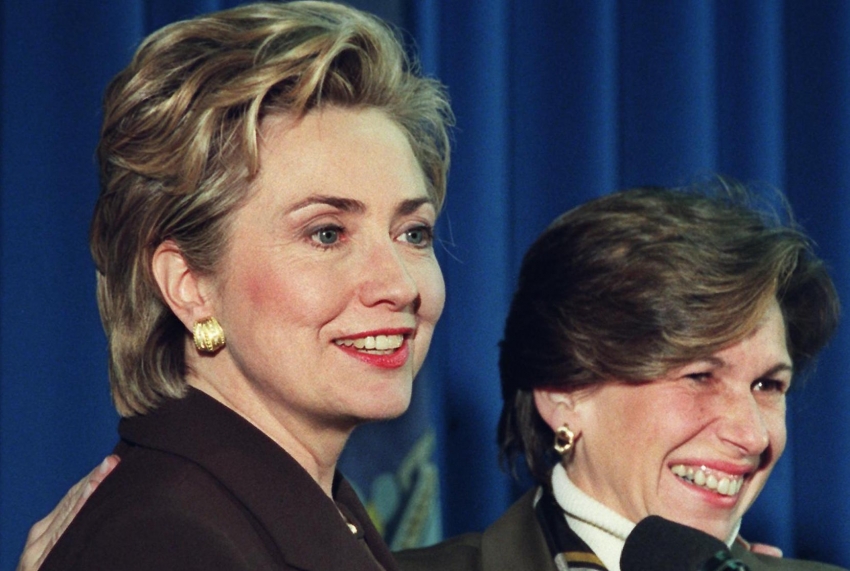 Leaked emails showed that AFT's Randi Weingarten promised to act as an attack dog for Hillary Clinton against another union that had endorsed Bernie Sanders in the primary. (STAN HONDA/AFP/Getty Images)

Donald Trump is going to be the next president of the United States. I feel a wild urge to scrub my hands with steel wool and bleach after typing those words—my fingers feel filthy.

If we want to avoid a similar nightmare in the future, we have to parse this election’s lessons and figure out who is to blame—not for cheap point-scoring, but to make sure we don’t make the same mistakes again. That means we have to talk about how American union leaders helped hand this race to Trump.

It wasn't on purpose, of course. It’s no secret that a Trump presidency will be absolutely disastrous for labor. A national right-to-work law, Wisconsin's viciously anti-union Gov. Scott Walker as Secretary of Labor, a pro-corporate National Labor Relations Board—all could be in the cards under Trump.

Union leaders wanted to prevent this. But their idea for how to do so wasn't any different from the rest of the Democratic Party establishment: going all-in for a centrist, "safe" candidate like Hillary Clinton at a time when the electorate was hungry for someone who would shake up the political system and who spoke to the pain so many Americans feel.

Labor leaders should have been in touch with this sentiment better than anyone. Their members—whether school teachers in big cities or laid-off factory workers in the Rust Belt—have suffered immensely in the age of austerity. There were warning signs. Unions haven’t released their own internal polling data, but Working America said in January that Trump’s anti-free trade message was resonating in Ohio and Pennsylvania, states hit particularly hard by deindustrialization. On Election Day, exit polls varied widely, but many showed union households voting for Clinton by either slim margins (CNN put it at just 51 percent) or by nowhere near as large a margin as they did for Barack Obama in 2012.

Yet rather than acting as clarion voices cutting through Beltway static to insist on choosing a candidate who spoke to working-class suffering and dissatisfaction with the status quo, labor leaders echoed the myopic vision of the pundits who insisted it was “her turn.”

That the Democratic king- (and queen-)makers would do this is maddening but unsurprising. It's consistent with the party's rightward drift over the last few decades. What makes union leaders' actions so astounding is that they rejected a stalwart champion of their agenda who raged against the billionaire class, walked picket lines with workers and spoke obsessively about widening inequality. Instead, they opted for a millionaire former Walmart board member with a checkered past on labor issues whose campaign refused to endorse a $15 minimum wage and couldn’t even muster a tweet in favor of low-wage workers.

Some union leaders’ sins are greater than others’. Randi Weingarten, president of the American Federation of Teachers (AFT), has long been engaged in what education scholar Lois Weiner has called a "public love fest" for the Clintons. As I noted recently, the AFT has given the Clinton Foundation somewhere between $1 million and $5 million under Weingarten for reasons that remain unclear. Her name was floated in some labor circles as a potential Clinton cabinet member.

In July 2015, AFT was the first national union to endorse Clinton—much earlier than the AFT had endorsed candidates in the past and likely over the objections of large numbers of its members who backed Sanders. From emails released by WikiLeaks, we know that Weingarten promised to act as an attack dog for Clinton against another union that had endorsed Sanders in the primary.

Tom Buffenbarger, then-president of the Machinists, even helped secretly move his union’s presidential endorsement up to endorse Clinton as soon as possible—despite the protests of some of the union’s members who preferred Sanders. The Service Employees International Union was all-in for Clinton since the beginning, despite the fact that she refused to endorse a $15 minimum wage that it had made into a national battle cry.

To be sure, not all union leaders blindly went “with her.” The Communications Workers of America polled its members and found rank-and-file support for Sanders. The union endorsed him. National Nurses United (NNU) also played a key role in the Sanders’ campaign. Its executive director, RoseAnn DeMoro, was often on the campaign trail and NNU played a key role in organizing the People’s Summit convergence in Chicago after Sanders lost the primary, where activists debated next steps for the movement that he helped spur.

The American Postal Workers Union, under recent reform leadership, also endorsed Sanders. “Sen. Bernie Sanders stands above all others as a true champion of postal workers and other workers throughout the country,” the union’s president, Mark Dimondstein, said then. “Politics as usual has not worked. It’s time for a political revolution.”

Yet these leaders were in the minority. Why? Most union presidents are far removed from the sentiments of rank-and-file members. Labor leaders like Weingarten hang out in elite circles, seeing themselves less as leaders of social movements whose everyday actions are guided by their members and more as peers of the kind of centrist Washington insiders that made up the top brass of Clinton’s campaign.

Radicals have long argued that American labor leaders are not only isolated from their rank and file, but actually have a set of interests that are distinct from their members. No president wants to see their membership rolls decimated, but they also don’t want to see an empowered rank and file independently organizing actions like strikes or campaigns on behalf of strongly pro-worker presidential candidates. Workers who are empowered to wage fights at work and in politics can also get together with their coworkers to boot conservative, corrupt or incompetent leaders out of office. And if labor is going to avoid such astronomical blunders as Trump’s victory in the future, rank-and-file workers will have to lead the charge against their Clinton-backing leaders.

It will go down as one of the great ironies of American political history: faced with a moment of record inequality and searing economic pain, a deeply unpopular, wealthy demagogue told voters he understood their misery and would reverse it. To take him on, leaders of the organized working class opted for the candidate whose ties to Wall Street were far stronger than her support for labor and argued that things really weren’t that bad out there. To do so, they rejected a wildly popular, diehard union-backing economic populist, thinking the centrist was the safe bet. She wasn’t. Now, the working class will pay the price.

Full disclosure: In These Times staff are members of the Communications Workers of America, and the union is a sponsor of the magazine. Sponsors play no role in editorial content.