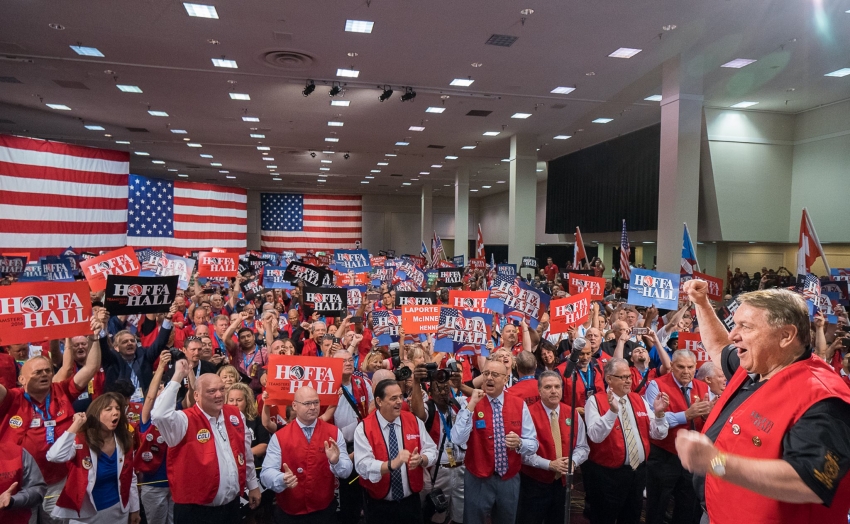 The vote was a lot closer than most observers thought likely and shows the level of division within the International Brotherhood of Teamsters. (Hoffa 2016/ Facebook)

Teamsters President James P. Hoffa appears to be headed for a narrow victory in his bid for election to a fifth term as head of the 1.3 million-member union. Unofficial vote totals show him beating challenger Fred Zuckerman with an estimated 100,000 votes, compared to some 95,000 votes for Zuckerman.

The tally was a lot closer than most observers thought likely and shows the level of division within the International Brotherhood of Teamsters.

Official results will be announced following the resolution of challenges related to uncounted ballots, according Richard Mark, head of the Office of the Election Supervisor, an independent agency charged with ensuring a fair election process. Mark told In These Times that the office had received a total of 211,635 ballots, but that some had been ruled ineligible because the voter was not paid up in union dues, or for other technical issues.

Many of Hoffa’s trusted lieutenants also appear to be headed for re-election, including Secretary-Treasurer Ken Hall. However, a strong showing by the Zuckerman slate of anti-Hoffa candidates in the union’s Southern and Central divisions translated into victories by Zuckerman-allied challengers for six vice president positions.

Zuckerman released a statement Thursday that offered a partial concession but also said that his side has filed election protests and will pursue every available legal remedy. It read, it part:

“As the ballots were tallied this week, we shocked the employers and Hoffa-Hall slate and won the majority of the vote from Teamsters in the United States. Hoffa-Hall overtook our lead when Teamsters Canada ballots were counted.

Tomorrow, the Election Supervisor’s office will start to resolve the ballots that were challenged because of eligibility issues.

The International Union vote count is nearing a close. The fight for our future is just beginning.”

Preliminary vote totals indeed show that Zuckerman won more votes among U.S. members and was leading by nearly 800 votes before the Canadian ballots were counted. But the Canadian vote went heavily in Hoffa’s favor, about 9,500 to 2,900.

In a recent interview with In These Times, Zuckerman said he’d been campaigning unofficially for more than two years, and that victory would depend on the ability of the challengers to increase voter turnout among members. But turnout fell from the last presidential election in 2011, when more than 250,000 members sent in ballots.

Election supervisor Mark said he did not expect a final, certified vote to be published until January 2017. He said it typically takes several weeks to resolve outstanding challenges and issues. In no previous case has a presidential election result been altered by the process of finalizing the initial results, Mark said.