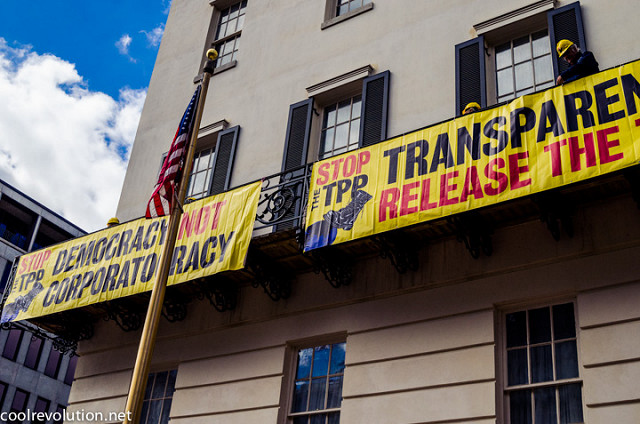 One of Trump's first policy announcements was that he would immediately kill the already-stalled TPP negotiations. (cool revolution/ Flickr)

The one election issue tying together populist voices on the right and left was trade—or so it seemed. Donald Trump’s upset win, fueled in part by Rust Belt rage against free trade deals and globalization, could hand liberals an unexpected opportunity to push a fairer set of trade rules, if they can shift the debate away from Trump's reactionary “bull in a China shop” spectacle and toward a concrete movement to advance a people-centered alternative, based on social-justice principles not return-on-investment.

A group of human rights organizations, including the Business & Human Rights Resource Centre and Institute for Policy Studies (IPS), has framed a human rights-based trade agenda requiring signatories to “understand, assess, and address their full effects on human rights, with a particular focus on vulnerable and marginalized groups,” such as women and migrants. Core provisions would include the right to a safe and healthy environment, fair access to medicines and respect for labor and indigenous rights.

The group contends that pending trade deals fail on these basic human rights standards. Such deals include the Trans-Pacific Partnership (TPP), which would link 12 Pacific Rim nations and was panned by both Trump and Bernie Sanders during the campaign, and the Trans-Atlantic Trade and Investment Partnership (TTIP), which would connect Europe and the United States.

One of Trump's first policy announcements was that he would immediately kill the already-stalled TPP negotiations and, instead, seek to negotiate bilateral trade agreements supposedly more beneficial to the United States. But progressive internationalists, who note that the TPP was likely moribund anyway due to widespread public backlash, warn that Trump’s rhetoric is equally short-sighted.

In a broadly-worded memorandum on a 200-day trade agenda, Trump's camp has laid out a program of deregulation and corporate tax breaks as a way to preserve domestic manufacturing jobs. The president-elect plans to sanction China for violating trade rules and promote “America First” by privileging the enrichment of U.S. corporations and workers above those of Mexico.

“This is a guy who has said U.S. workers are overpaid, that climate change is a hoax and that has no problem buddying up with authoritarian regimes,” says Arthur Stamoulis, executive director of the fair-trade coalition Citizens Trade Campaign.

Advocates like Stamoulis see Trump as a continuation of previous administrations' neoliberal agendas. Even if he scraps the TPP and similar deals, his whole business persona embodies the predatory multinational investment that underlies free-trade market liberalism. According to IPS associate fellow Manuel Perez-Rocha, despite his populist veneer, the president-elect will likely “expand free trade and corporate-friendly policies but just with other names.”

A structural challenge to the neoliberal order would involve tackling not only trade policy, but also, for example, labor exploitation and dominance of international financial institutions over Global South economies. Rather than Trump's “'them against us approach,” a left trade analysis should, in Perez-Rocha's view, show “all these problems … are interconnected.”

“Turn the status quo model on its head”

During the campaign, fair trade advocates argue, the “America First” rancor against the North American Free Trade Agreement (NAFTA) and similarly-maligned trade deals among Trump's support base stemmed from a zero-sum calculation of multinational exploitation, which actually encourages labor and environmental abuses. But since trade policy is just one instrument by which global resources are controlled, the emerging trade reform debate on the left must extend beyond bean-counting manufacturing jobs to consider questions of redistribution of wealth and power, how global markets should serve workers and communities and how to move government priorities from growth at all costs toward mitigating inequality.

One potential approach is to look outside our trade networks to sculpt global accords based on humanitarian and environmental priorities. For instance, the Sierra Club's new climate-focused blueprint for trade parallels the Paris climate agreement—the broad set of international goals and standards for emissions reductions and climate mitigation, which is now endangered because of Trump’s rejection of carbon-related regulation.

The environmental movement should not, according to Brune, “let the president-elect define the next trade model." Rather, progressives should seize the moment of disruption.

"The template for status quo deals like NAFTA and the TPP was written decades ago, with the primary goal to boost the profits of multinational firms including big oil and gas corporations, above all else,” Brune said. “We must turn the status quo model on its head."

Yet promoting more climate-friendly business deals won’t necessarily protect workers and communities, which is why some labor groups seek to redefine the framework of labor law across the global supply chain. The International Labour Organization champions a transnational regulatory system that would establish legally-binding labor standards for companies across borders for fair wages, collective-bargaining and organizing rights and anti-discrimination protections.

Beyond setting global rules for national governments, enforcement is another challenge. One basic feature of the left-oriented alternative trade visions is a new international justice system. The idea is to check neoliberal corporate power on all policy fronts, including trade, climate and labor, under an ethos of transnational solidarity, not economic nationalism. A supranational legal body would enforce universal human rights accords and replace the existing investor-state dispute settlement mechanisms—a litigation system incorporated into many trade pacts to empower corporations to challenge environmental, consumer and labor regulations that allegedly impinge on investors' “right” to trade freely.

In contrast, under a socially-conscious judicial structure, citizens and civil society activists could petition against foreign investors and corporations over rights abuses: tribal nations at Standing Rock could circumvent U.S. courts and petition to block the Dakota Access Pipeline project, perhaps. Or Bangladeshi garment workers could sue Walmart for sourcing clothes in crumbling, union-busting factories. A transparent tribunal representing the public interest would protect communities and ecosystems rather than serve to further empower industry.

The overarching question is whether global justice movements can press their governments and the corporations that shape our economies to commit to shared social priorities. To that end, the Treaty Alliance, an international organization of civil society groups, recently presented at a United Nations conference “a binding international instrument to address human rights abuses committed by transnational corporations and other business enterprise.” The binding treaty would provide community groups with the right to challenge state and corporate oppression, ensuring due process around the world.

Though the coalition's framework largely draws on the United Nation’s longstanding blueprint for human rights law, it would add legal teeth to a concept that has eroded under postwar capitalism.

In the United States, for now, mainstream labor activists see few prospects for such a policy under Trump. As Thea Lee, deputy chief of staff at the AFL-CIO explains, despite rising activist momentum for a humane trade system, promoting any binding human-rights treaty before a rampantly plutocratic administration “doesn’t seem like a useful endeavor given the current power structure.”

Yet the limited political latitude in Washington may present a segue for a global justice movement to organize outside conventional bastions of power. Long before the election, after all, from Occupy's international valence to the global climate justice mobilization, people's movements were rising up to demand corporate accountability, showing that democracy and self-determination should, and do, start in the streets.

Trump’s win revealed a neoliberal establishment cracking from within. But the ideological fissures exposed by Trumpism have perhaps opened space for progressives to swap “free trade” for a new social contract.