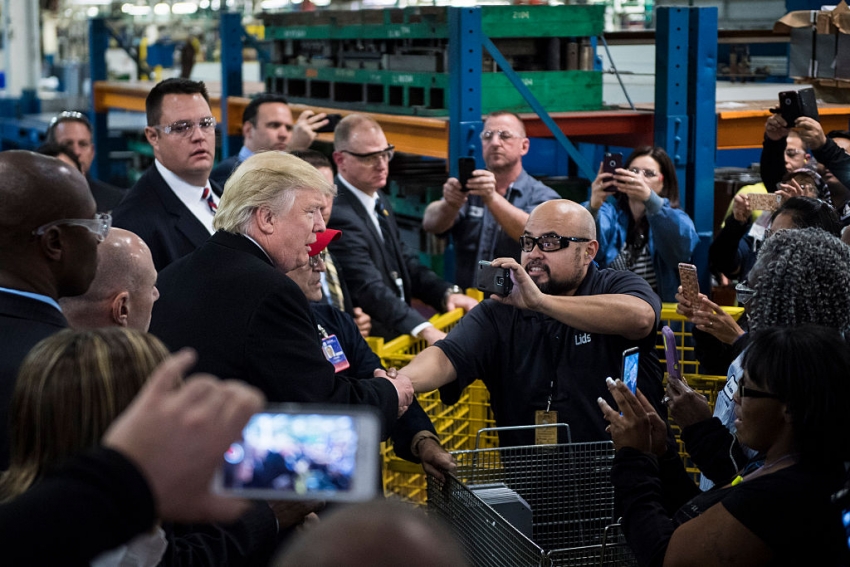 Over the past year, Trump has uttered lots of bigger promises that will be much harder to fake than the Carrier deal. (Jabin Botsford/The Washington Post via Getty Images)

Within a day after Donald Trump's triumphal visit to Indiana, where he claimed credit for "saving" 800 jobs at a Carrier factory, the Department of Labor released its first monthly unemployment report since his election victory—and one of the last that will come out during the presidency of Barack Obama.

Together those events illustrated the contrast between a real strategy for economic growth and the dubious gambit of a Twitter addict.

During his presidential campaign, Trump repeatedly warned that if he became president, companies moving U.S. manufacturing plants abroad would suffer punitive tariffs of 35 or even 45 percent when they tried to sell their overseas products here. More than once he specifically mentioned Carrier Corp., which builds cooling and heating units. After post-election conversations with company officials that included his running mate, Indiana governor Mike Pence, Trump declared that he had fulfilled his promise by "saving" those Carrier jobs.

Yet rather than punish Carrier for taking most of its Indiana jobs to Mexico, Trump and Pence actually rewarded the company with $7 million in state tax booty—plus any additional promises concerning the billions in Pentagon contracts held by Carrier's parent company, United Technologies. Spending Indiana taxpayers' money, Trump did precisely the opposite of what he had promised.

The next day came the latest proof of the steady success of Obama and his economic team, with yet another monthly tick upward in job growth and another tick downward in unemployment—now at 4.6 percent, its lowest point in almost a decade. Even with all the caveats about slow wage growth, reduced workforce participation, and continued manufacturing losses, the revival of the American economy under Obama is the envy of the world.

Among the achievements that led to America's low unemployment rates was the preservation of well over a million auto industry jobs, in the same battleground states where Trump carved his excruciatingly narrow win. When Obama decided to bail out auto, he faced enraged opposition from Republicans claiming to defend "free market" principles. (The auto industry repaid its federal loan, with interest.) Yet Republicans now praise Trump for wielding government power to cajole a private company so he could "save" well under a thousand jobs.

Over the past year, Trump has uttered lots of bigger promises that will be much harder to fake than the Carrier deal. He vowed to create 25 million jobs, for instance, and rebuild the nation's infrastructure—without increasing the deficit. But to accomplish even half of what he has pledged, Trump will have to overcome more than a century of American economic history.

The partisan contrast is stark enough for any voter to understand: Whenever a Republican president left the White House, unemployment was higher than when his term began, while the opposite was true whenever a Democratic president completed his term.

Can Trump break the patterns of a century? Despite his populist rhetoric, what he proposes is scarcely different from his Republican predecessors: He intends to deliver gigantic tax cuts to the wealthiest households in the country. Even his infrastructure plan is another enrichment scheme for the super-rich, designed to attract investors by granting them an 82 percent tax credit. But only projects that can deliver a return by charging tolls or fees will draw such investments, while trillions of dollars in desperately needed projects will languish without public funding.

While Donald Trump's proposed corporate tax cut may well bring home money for business investment, the history of tax cuts as economic panacea is disappointing at best. Every signal suggests that he will pursue the same plutocratic approach favored by all presidents of his party. The "success" of the Carrier deal will be long forgotten if and when he delivers the same bitter results.