EPA Workers to Trump: We Don’t Want Scott Pruitt as Our New Boss 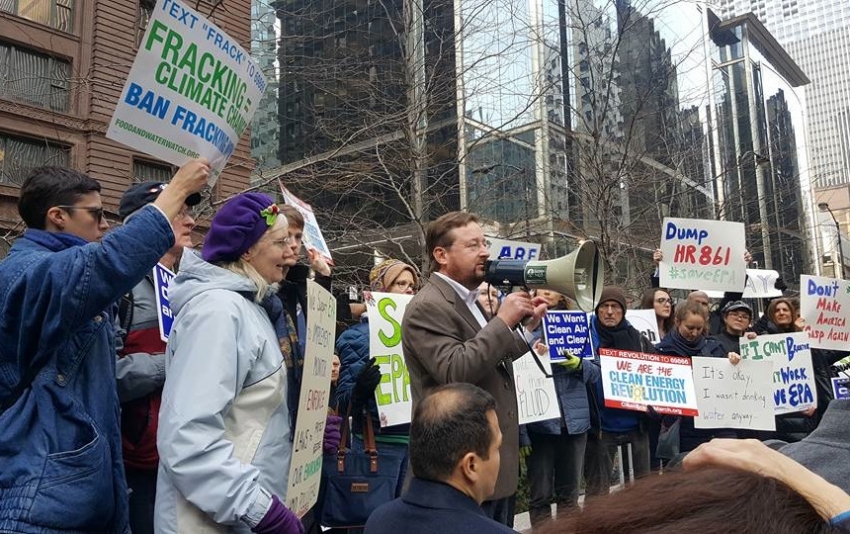 Jack Darin, director of the Illinois chapter of the Sierra Club, addresses a rally outside the EPA’s Chicago office. (Susan Hurley/ Facebook)

The American Federation of Government Employees (AFGE) Local 704, the union representing the EPA’s Chicago workers, organized the protest to oppose Pruitt’s confirmation and to pressure senators to vote against him. Speakers at the event included stewards and members of AFGE, state and city government officials and activists from non-profit environmental organizations.

“Thirty-six years, we been fighting for environmental justice,” Cheryl Johnson told the crowd. “[Pruitt] don’t know what a fight is, ‘cause he just started one.”

Johnson is a resident of public housing who spoke at the rally. She is also the director of the People for Community Recovery, a non-profit organization that works for environmental justice in Chicago’s South Side. Her mother, Hazel Johnson, founded the organization in 1979 to press for repair work in a Chicago Housing Authority development called Altgeld Gardens.

“These are really difficult issues,” Jeffery Trevino, steward of AFGE Local 704, told a young man who began to cry as he expressed fears that the effects of Trump’s climate skepticism would outlive his administration.

Current EPA employees are not the only ones denouncing Pruitt. Nearly 450 former EPA employees, including many who served under Republican administrations, sent a letter to the Senate on Monday expressing serious reservations about Pruitt’s record. The letter emphasized concerns over Pruitt’s history of lawsuits, consistent support for business interests, opposition to regulation and reluctance to accept the science of climate change.

Pruitt sued the EPA 14 times as Oklahoma’s attorney general and is expected to cut and weaken the organization if confirmed as its administrator. On February 1, Democrats in the Senate’s Environment and Public Works Committee boycotted a vote that would have sent Pruitt out of committee to be voted on by the full Senate. The next day, Republicans suspended the rules of the committee and held the vote without any Democrats. The full Senate is expected to vote on Pruitt’s confirmation this week.

State and city government officials who attended the rally spoke to their commitment to fighting Trump and to serving as a resource for the community.

“You have allies in state government who are going to stand with you,” said Illinois State Rep. Will Guzzardi.

Linda Sullivan is a retired history teacher who remembers when the highly-polluted Cuyahoga River caught fire in 1969.

Sullivan added, “There are some things that are reversible when we vote him out. But the damage to the planet, especially the climate, is irreversible.”

Nida Bajwa is a winter 2017 In These Times editorial intern.